Home  »  News   »   The Problem with Running a Crypto Newsletter

I had a hilarious conversation with a director of Bitfarms over the phone a few weeks back.

“We have investors mad at us,” he said.

“Why?” I said. “You guys are pretty much a double in the last two months.”

And so it goes. In the world of crypto, if you look at your return on investment compared to other sectors like oil and gold, you should be happy. Very happy.

But the human psyche doesn’t work that way. There is always somebody else who is doing better than you.

Here’s a chart that should make you weep (unless you own it). 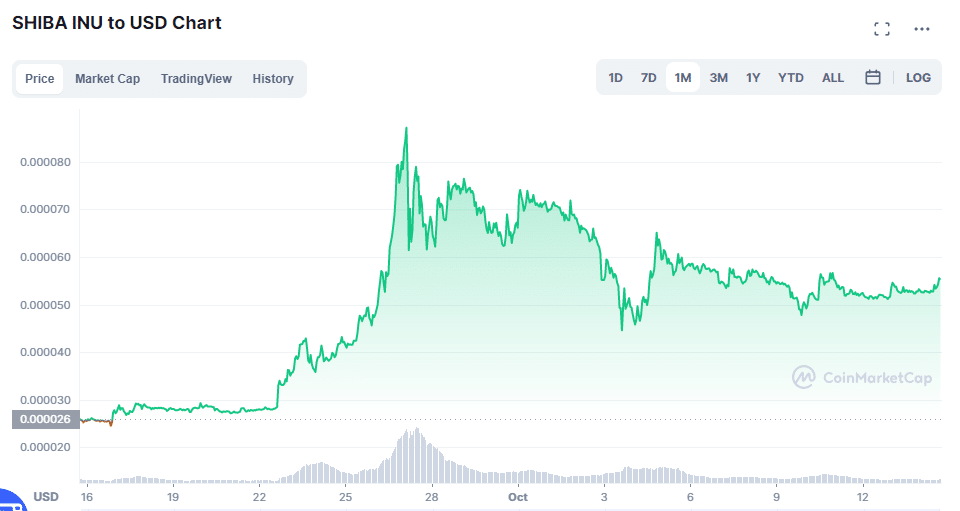 That’s more than a double today.

Obviously, I didn’t buy it, because I am still writing this newsletter and not drinking daiquiris on an exclusive private resort on a Caribbean island.

And if somebody has asked me in September about the SHIB coin, I would have said it’s a stupid meme coin and I wouldn’t touch it with a ten-foot pole.

The positions you take that have the best chance of a payoff are intellectually indefensible.

Let me put it another way.

I have a small paid group. Every month I hold a subscriber zoom call and talk about the investments in the NCF portfolio and where I think the market is going.

The portfolio has a few coins and tokens and a few public stocks in the crypto sector.

Now, every month, the members of the group expect me to talk about the positions that I hold.
And that’s where it gets tricky.

It doesn’t really do anything. You can’t execute smart contracts off it. It’s not used in any blockchain game. There are no Defi applications that use it.

It’s a meme coin. It’s got a cute fuzzy dog as its logo.

If you ever want to pick a coin that insiders are planning to dump and push it down to zero, this is the coin.

But I thought the same thing about Dogecoin back in 2018, and I don’t even want to look at the price and market cap of it today.

The biggest lie you can make to yourself in crypto today is that any coin or token that cracks the top 100 is going to zero eventually.

It hasn’t happened in my five years of serious investment in this space. Yes, coins in a bear marekt can go down a lot.

Cockroaches have nothing on some of these tokens.

Meanwhile, I have some lovely crypto-stocks in the portfolio. Enormous potential. Some of them actually have cash flow. And they have done nothing this quarter.

Can I intellectually justify their position in the NCF portfolio? Oh yes. There are lots of reasons to own them.

But who cares about reasons, in a raging bull market?

Another zoom subscriber conference is coming up at the end of the month. I have no idea what I’m going to say at it