Home  »  Analysis   »   The Bitcoin Everlasting Civil War is Over, Guess Who Won…

Well that de-escalated quickly. This picture should tell a lot of the story:

In case you can’t read the fine print, that’s showing more than 90% of miners are supporting the SegWit2x (intention).

But even better news is this: 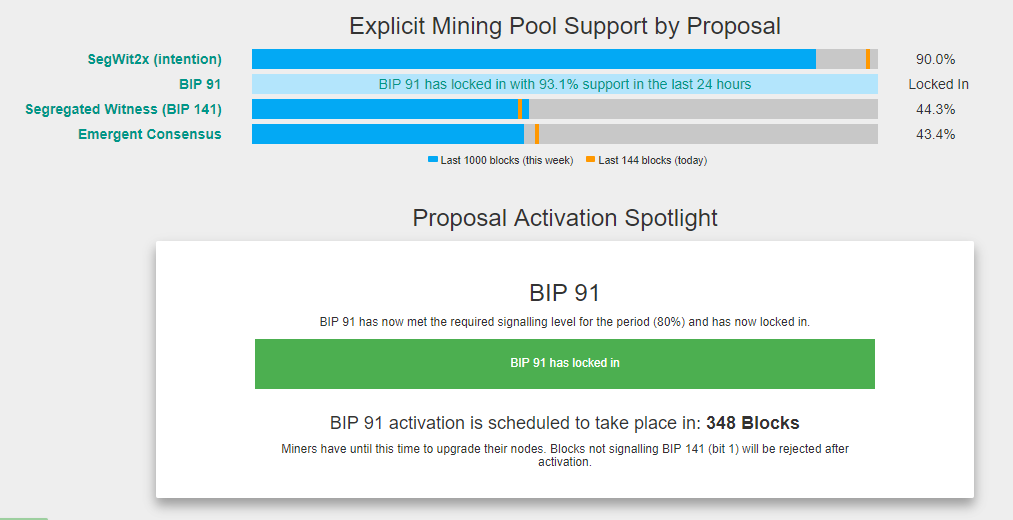 What is BIP 91? Well Coindesk has a really good summary of it here. But if you are too lazy to click over and read about it, I will summarize here:

BIP 91 makes it really, really hard for a miner to hard-fork Bitcoin.  Not impossible, but really hard.

The Bitcoin core team hasn’t implemented a solution until now because…..developers. No seriously, check out the epic whining about Segwit on this bitcointalk forum thread.

It’s been four years since the problem was identified and the miners are shoving a solution down the core development throat and the response is …shock and surprise. Oh please.

The Bitcoin Civil War has been portrayed as between the evil selfish capitalistic grubby (mostly) Chinese miners and the idealistic, hippy, libertarian American Bitcoin core developers.

And the bad guys won. Just kidding.  Actually if you read between the lines Segwit2 was an olive branch/compromise that seems to be working just fine.

At this time of writing, Bitcoin was trading north of $2700 US.

How Bitcoin has spiked so close to its all-time high while exchanges are sending out notices that they will be suspending trading on August 1st , because of the possibility of a hard fork,  is beyond belief. Like isn’t ANYBODY the slightest bit nervous?

Only me I guess. Even though it’s costing me Bitcoin I will continue to hedge on Bitmex. Sleep is good.