With less than  24 hours before the Bitcoin hard fork (ie a rebel group splits off and creates Bitcoin cash, the price of Bitcoin looks remarkably stable:

Coindesk has a good technical explanation for what will happen tomorrow, but here is a quick summary: On August 1st, a rather large mining pool (Bitcoin server group) will allow individual miners to direct their computing power to a different software client. Instead of producing Bitcoins, they will produce a new coin called “Bitcoin Cash”

Despite the confusion and uncertainty, for the last week of July, the price of Bitcoin has hovered between $2500 and $2900. At present it’s near its all-time high at $2800.

However, there are ominous signs over at Bitmex: 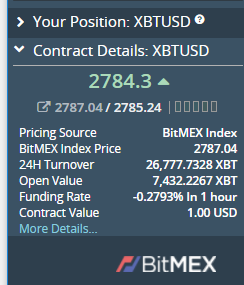 Let me explain what you are seeing. This is a screencap of a futures contract at Bitmex, a Bitcoin trading exchange that specializes in allowing traders to go short or long on Bitcoin with massive leverage (up to 100x). It has been in business since 2014, or forever in Bitcoin years.

The XBTUSD contract at Bitmex is a perpetual swap allow the user to go long or short on Bitcoin.

With Bitcoin at more than $2800, you can buy XBTUSD at $2784.30. This looks slightly bearish. However look at the funding rate: It’s nearly -28%. When the funding rate is negative, the shorts have to pay longs.

What’s the big deal you ask, 0.28% is not much? Oh but it is. That’s not an annual rate. That’s not even a daily rate. The funding rate is paid out every 8 hours or 3 times a day. So the current interest rate to short Bitcoin is 306% per annum.

Bitmex also offers contracts on Bitcoin with no funding. The XBTU17 contract expires on September 29th. 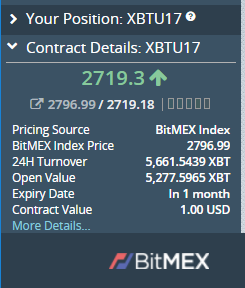 This is even more bearish. This 30 day contract is trading at 3% discount. That means the market is assuming that for 30 days after August 1st. , Bitcoin will not break above $2700.

Historically, the XBTU17 has hardly ever been bearish. Note that the purple line is the market price:

So what does this mean? Bitmex is not only home to Bitcoin speculators but also some of the canniest investors in the Bitcoin universe. But traditionally it’s has always been very bullish. But today it is screaming that August 1st will be an… …interesting trading day.

Author’s Note: At present I am long Bitcoin, with most exchanges (including Bitmex) promising to freeze deposits and withdrawals tomorrow.