TRON is one of the hottest crypto-coins in early 2019.

Better yet, the January price has been consistently higher than the price in later half of 2018 (not many cryptocurrencies can say that) 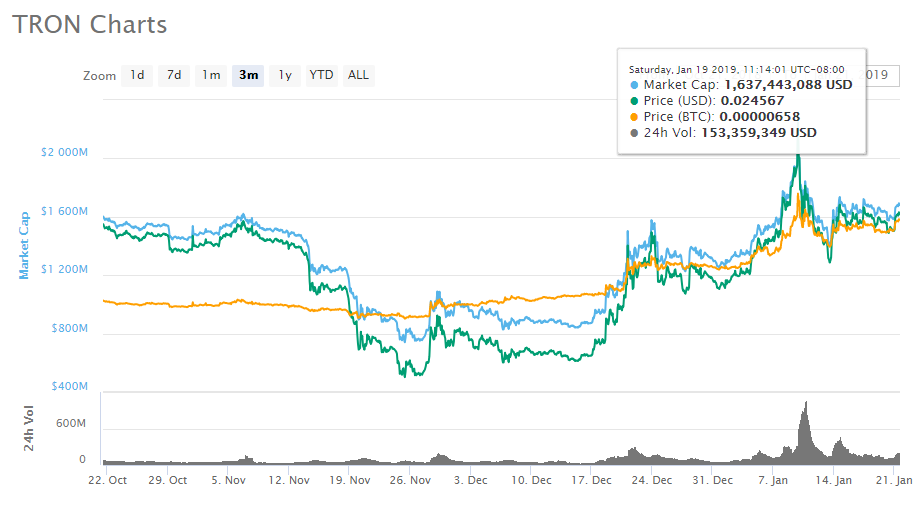 TRON is not only beloved by investors, but by developers as well.

Many consider TRON to be technically superior to Bitcoin and Ethereum. For example, in the last week, TRON has been averaging more than 2 million transactions per day.

TronDice is a wildly successful gambling game built on the TRON platform with more than $300 million USD in winnings paid out.

By nearly every measure, TRON looks to be a winner.

But you should buy some?

The smart money says no.

In the world of crypto, if you think a coin is good investment, first ask the shorts. And the shorts don’t think much of TRON.

The TRON futures contract is currently trading at a huge eight percent discount on Bitmex:

To put it another, why buy TRON today when you can buy the futures contract at an 8.1% discount and sell it for full price only two months later?

Did I forget to mention leverage? A low leverage of 5:1 gives you an annualized return of 240%!

Therefore, the question is why investors are not pilling into the TRON futures contract on Bitmex?

And the answer is that Bitmex is the only exchange in the world that allows an investor to short TRON. Therein lies the problem.

You must go long on Bitmex to capture the eight percent spread.

But to cover yourself, i.e. hedge, you need to find another exchange to go short. Otherwise, you are exposed to the price of TRON.

It’s no good buying TRON at an eight percent discount if, in two months time, the price of TRON is cut in half. That’s what the shorters think (otherwise the TRON futures contract would not be in such backwardation).

Back to the problem. Bitfinex will not allow you to short TRON. Kraken doesn’t list TRON. Neither does Poloneix.

None of the usual suspects allow an investor to short TRON.

This means there must be issues with liquidity.

Needless to say, there is a lot of skepticism in the market about the CEO’s promise.

Mr. Sun is a controversial figure in the crypto-community (and considering the number of characters in the world of crypto, that’s saying something).

For the time being, I won’t touch TRON with a ten-foot pole. It’s not that I think TRON is scam coin.
I don’t know and I don’t care if Mr. Sun is planning a surprise dump of his stash of 33 billion TRON coins.

That’s not the problem.

The problem is the TRON Bitmex futures contract that is in MASSIVE backwardation and set to expire in March.

This contract is a powderkeg. All it needs is a match.

Or, to be precise, all that needed to put TRON into a tailspin is a crypto-exchange willing to offer the option to sell TRON short to its members.

Do the math: Buy the Bitmex TRON contract at 3:1 margin. Short-sell TRON at 3:1.

Your return on investment for tying up your money for 2 months is 3 x 8.1% divided by 2.

And that trade can be fully hedged with no exposure to the price of TRON.

But you wouldn’t even have to wait two months to realize your return on investment. Once an exchange offers the option to sell TRON short, two things would happen:

My guess is that both the price of TRON and the Bitmex futures contract would adjust very quickly.

Now, if no exchanges offer the ability to sell TRON short up to end of March, a gambler can still buy the TRON futures contract unhedged and make anywhere from 8% to 40% unhedged.

But that’s a big risk. Too big for me.

I will wait on the sidelines for now. Unless I can find an exchange that is willing to let me short TRON. Then I will jump into this trade with both feet.