Home  »  Analysis   »   Will this Fairytale Romance Lead to the Next Crypto-Boom?

I hope you are laughing at the picture.

And that’s great, because there hasn’t been anybody laughing about the energy crisis in Alberta for a long time.

The stupidly-low price of natural gas in Alberta has been crippling the provincial economy for years and leaving investors in the energy sectors in tears.

Do you think I am exaggerating?

https://www.gasalberta.com/gas-market/market-prices
This is a chart of the spot price for natural gas in Alberta, Canada.

As you can see, for the month of August, the spot price of a gigajoule of natural gas in Alberta has been as high as $1.75 and as low as 7 cents (CAD).

One gigajoule of natural gas is approximately equivalent to 27 litres of fuel oil, 39 litres of propane, 26 litres of gasoline or 277 kilowatt hours of electricity.

The gas tank capacity of my Honda Odyssey is 74 litres. Hypothetically, if I could fill my tank with natural gas, it would cost either anywhere from $4.98 (CAD) to a low of 20 cents.

This is not a temporary price fluctuation.

As a matter of fact, this is a snapshot of natural gas prices in Alberta in relatively good times.

As recently as June 20th of this year, natural gas prices went into the negative, with producers having to pay as much as 11 cents per gigajoule for somebody to take the natural gas off their hands.

Month after month, year after year, the cheapest energy source in the world has been Albertan natural gas. And why is that?

Well of think of a princess trapped in a castle, and you should think immediately of Alberta’s natural gas producers. 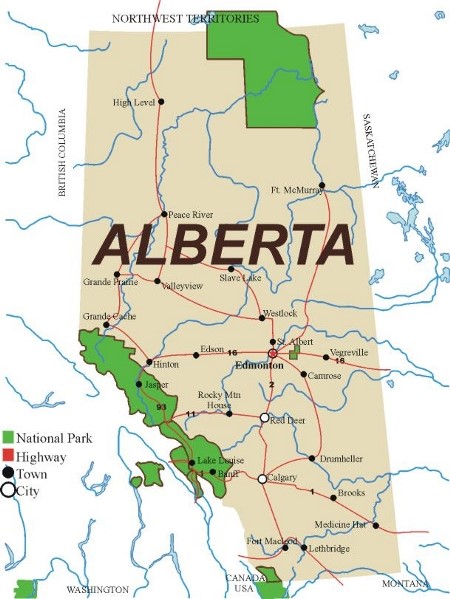 Alberta has no place to export its natural gas. To south, it exports 6 billion cubic feet a day to the US, but exports have remained flat for several years, as America ramps up its own supply of natural gas.

To the east is the lucrative European market. But that’s 7000 kilometres away. Alberta would need a pipeline to the east coast (about 4800 kilometres) and massive liquid natural gas facilities to be built to ship the gas.

Such plans have been talked about for years, but nothing has happened so far because of politics and environmental concerns.

And so surplus natural gas remains in Alberta’s storage tanks. This year it’s a been an average of 10 billion cubic meters of natural gas.

Bitcoin Miners to the Rescue

Everybody knows that the miners want one thing for their rigs: cheap power.

They need power that nobody can else use. Let me explain:

But data, carried over a fibre-optic cable, has no such limitations. Data can be sent halfway around the world using the internet and the costs are negligible.

But if the power stations have servers that generate data, data that has value, that problem goes away.

Every bitcoin mining company in the world knows this. That is why they are flocking to Alberta.
And ONLY Alberta.

There are other parts of the world with cheap, stranded power. But as experience has shown, another factor creeps into play for the bitcoin miners: politics.

Do you know which bitcoin miner has access to the cheapest power in the world?

Their flagship facility in Grant County, Washington State, USA has access to power costing only 3.5 cents a kilowatt.

But guess how much power the facility consumes.

And Fortress Technologies has no plans for expansion.

Do you want to know why?

Because in 2018, the Grant County public utility district decided to screw the bitcoin miners that, up to then, had been flocking to the county:

https://news.bitcoin.com/cryptocurrency-firms-sue-washington-states-utility/
As suddenly as it started, the bitcoin mining boom in Eastern Washington state went bust.
Fortress Blockchain investors participated in a financing at 50 cents, and saw shares fall to 12 cents.

Let’s look at another example.

Norway is also home to a lot of “stranded” power capacity, in the form of hydroelectricity.

The power there is so cheap that another cryptocurrency miner, HIVE blockchain closed a deal in May of 2018 to acquire a 64 hectare site in Kolos, Norway, to mine Ethereum.

The article states the reasons for building the new facilities in Northern Sweden were as follows: cheap electricity, cold weather, and a favorable political climate.

As it turns out, they got two out of three right.

“In early December 2018 the Norwegian Parliament approved a legislative bill that cryptocurrency miners will no longer be subject to tax relief on power consumption at the same rate as other power-intensive industries. This change, which is included in the state budget for 2019, is expected to take effect in March 2019.”

Needless to say, HIVE Blockchain is not planning to build any more mining facilities in Norway.
Hive Blockchain is currently trading under a dollar. They raised money for the Koslo purchase at THREE dollars.

But it’s safe to say that Alberta’s provincial government will (has) welcome bitcoin miners with open arms.

They need bitcoin miners, not to soak them for tax revenue, but to soak up the excess natural gas produced by the energy sector.

To say that Albertan politicians have been frustrated by the environmental groups that encircle the province is an understatement.

Albertan politics is the last thing that bitcoin miners must worry about.

The One Thing Stopping the Perfect Marriage

Or to be more precise, investors.

For the last few years, if you wanted an investor to leave the room, just introduce him to a natural gas producer.

2018 was such a bad year for bitcoin miners that investors didn’t just leave the room, they fled.
But in 2019, a funny thing happened.

And public bitcoin mining companies in Alberta started to make a LOT of money.

HUT 8 is Canada’s largest public bitcoin mining company. They are based in Alberta.

They just announced third-quarter results and it was very good.

But the stock is currently trading under $1.65 CAD!

It’s obvious that bitcoin mining companies are still in the penalty box. But the billion-dollar question is, how long with they stay there?

While the public markets are still giving Canadian bitcoin miners the cold shoulder, private capital by investors is starting to trickle in.

In my next article, I will talk about the “second wave” of Canadian crypto-miners and how they will avoid the mistakes made by the first wave.