Home  »  Analysis • Magically Predicting the Future   »   It’s Been A Lovely Party, but Soon I Must Go

The fundamentals are sound. Institutional buyers are stepping in just as supply is drying up.

Do I think bitcoin will reach $100K in 2021? Let me put this way: If it does, I will be writing these articles from a sunny beach in the tropics, with the cabana boy bringing me an endless stream of Margaritas.

But before I book those tickets, we have to get through the rest of December and then January. And therein lies the problem.

As sure as rain follows sunshine (at least in Vancouver), unbridled optimism in bitcoin leads to one thing:

And high funding rates bring out the sharks who feast on the overleveraged longs.

Expect some severe price corrections even in the midst of the usual end-of-the-year euphoria.

Instead of a fixed date whereby the contract is settled, a funding rate is paid out every 8 hours if the contact is up or down according the current market price of bitcoin.

A funding rate of .01% per eight hours is normal to see across all exchanges when looking at the XBTUSD perpetual contract (XBT=Bitcoin). That works out to 10.95% per annum.

That doesn’t sound like very much unless you realize you can easily leverage 3-1 or even 10-1. That jacks up your return from anywhere from 33% to more than 100% per annum.

And that’s a normal funding rate. As you can see below, the funding rate for bitcoin futures contact on Deribit (one of the more popular exchanges in crypto), has been periodically TEN TIMES the normal 0.01% rate.

A trader willing to short bitcoin at 10:1 leverage could theoretically make 1000% per annum. 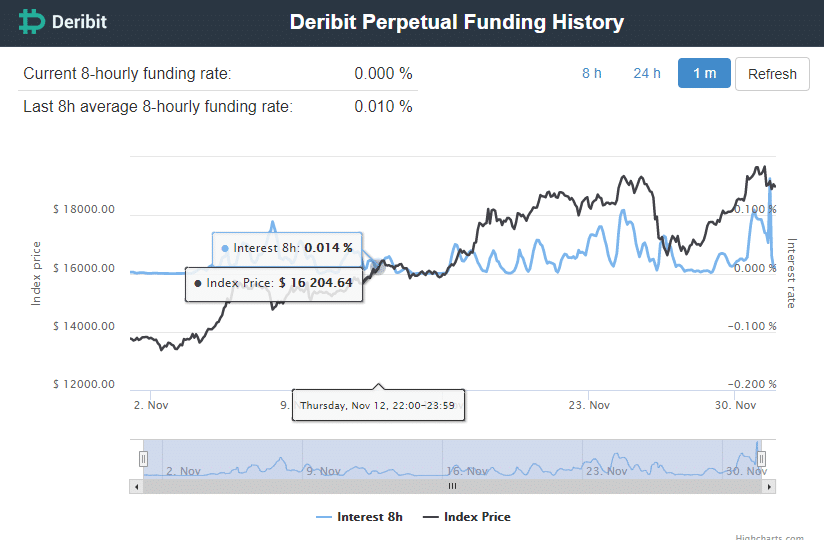 That makes it nearly irresistible to short bitcoin, and if mass shorting results in a price correction causing liquidations of the over-leveraged longs, that’s a feature, not a bug.

I hold to my prediction that the party will only last until Christmas until the very latest.

Hope I’m wrong of course. But you don’t buy expensive jewellry for the wife for Christmas with hope.

Meanwhile, although bitcoin did very well, Ethereum did even better this year (up 360%) and not bad in November (up 54%).

The good news is that after a wait of nearly three years, Ethereum 2 was launched today. Eth 2 (as it’s called) will finally provide developers with the tools necessary to solve the persistent transaction bottlenecks of Eth 1.

That’s the good news. The bad news is we are still many months away from Ethereum 2 implementations that will speed up transactions to a significant degree, and more importantly, lower gas fees on executing contracts.

This isn’t some esoteric feature only needed or wanted by developers. You can’t do a single thing in Ethereum without paying gas fees, whether it’s just transferring some Ethereum to a different wallet or providing funding to an Uniswap liquidity pool.

A simple transfer could cost you only a dollar. But other transactions can easily cost seven to fifteen dollars.

That’s too much. If I want to trade a few hundred dollars of Ethereum on a decentralized exchange, a ten-dollar gas fee plus the exchange fees is too much.

Have you played any cool Ethereum games on your phone lately? Of course not. There are some amazing games in development, but they are literally too expensive to play.

What if Ethereum goes to $1000? All but the most simple transactions will cease.

I’m not saying Ethereum won’t go to $1k in the next few weeks. I’m saying it’s not sustainable.

So why won’t we see the end of the mania until the third week of December?

I am assuming the hoopla over bitcoin hitting its all-time this week and Ethereum 2.0 launching will let the party go on for a couple of more weeks. Not everybody is a grump like me.

But trust me I am a fun guy. Whenever somebody asks me about bitcoin, I always say everybody should buy a little bit.

But not in December. Not this December. If you have not bought any bitcoin yet, you missed the boat or at the very least, you are cutting it way too close. Wait for the first week of February.