There are two competing theories about the stock market.

One is the efficient market theory.: everything is already fairly and accurately priced, and any movement in price reflects new information being released to the market.

And then there is chaos theory, which simply put, is the observation that complex systems suddenly bite you in the butt every once in a while.

To crypto-veterans, that looks like a typical correction that happens multiple times a year, but back then, it was the largest percentage drop in one day ever, for the New York Stock Exchange.

The 1987 stock market crash is probably the least studied and least understood of the four major market crashes of the last fifty years.

Very few (if any) of today’s crypto-traders have memories of that crash (I was nineteen at the time, in university, and as poor as you can imagine).

What happened? The very short explanation is that it was the first instance of a “algorithmic” crash i.e. crash by computer.

The depth of the drop was completely unexpected. A glitch, you might say.

But in hindsight, the signs were there.

It had been a good year up to then. In August of 1987, investors were looking at yearly gains of 44%.

Then the fourth quarter hit:

“In mid-October, a storm cloud of news reports undermined investor confidence and led to additional volatility in markets. The federal government disclosed a larger-than-expected trade deficit and the dollar fell in value. The markets began to unravel, foreshadowing the record losses that would develop a week later. Beginning on October 14, a number of markets began incurring large daily losses. On October 16, the rolling sell-offs coincided with an event known as “triple witching,” which describes the circumstances when monthly expirations of options and futures contracts occurred on the same day. By the end of the trading day on October 16, which was a Friday, the DJIA had lost 4.6 percent.5  The weekend trading break offered only a brief reprieve; Treasury Secretary James Baker on Saturday, October 17, publicly threatened to de-value the US dollar in order to narrow the nation’s widening trade deficit.”

Stop losses work great to protect your portfolio. Unless everybody does it.

Lessons for Today: Buy the Glitch

“Black Monday” was the first instance where computerized algorithms in the stocks market “glitched” and gave canny investors the chance to profit.

With a little help from the Fed (this is where the Fed first used “liquidity” to bail out their bros on Wall Street), the market recovered quickly.

In just two trading sessions, the DJIA gained back 288 points, or 57 percent, of the total Black Monday downturn.

But how many “glitches” have occurred on the NYSE since 1987? Not too many at all. It has helped greatly New York Stock Exchange will temporarily halt trading when the S&P 500 stock index declines 7 percent, 13 percent, and 20 percent.

Plus the Fed has made a habit of providing a “soft” landing when the market gets over-extended, and everybody knows that.

“Glitches” make everybody look bad, so for the senior stock markets, there’s a plan in place (let’s see how it works out in 2022) if things get crazy.

But glitches in crypto? That’s a different story. They happen all the time. One happened just last month:

Here is a monthly price chart of Ethereum and yes, that’s a drop of 36% in three weeks: 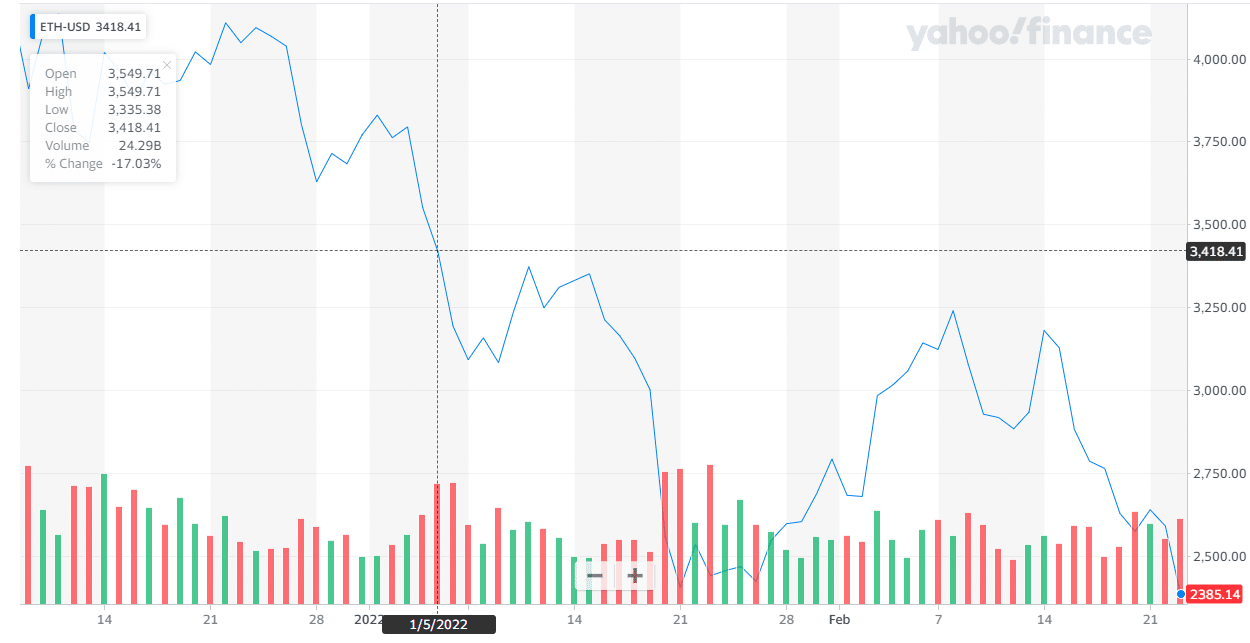 Hard to see the numbers, but trust me when I say at no time did the price of Ethereum drop below $2385 in the last sixty days.

Now here is a price chart from Deribit, a crypto-futures exchange. The red circle shows the glitch: 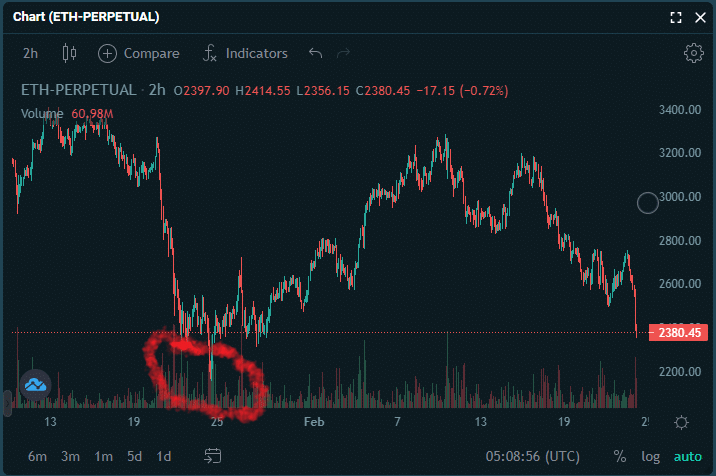 For Ethereum perpetual futures contract, a derivative that is supposed to mimic the spot price of Ethereum, you can see it went far below $2385 on January 24th.

During times of market stress, the perpetual futures contracts in crypto often drop lower than the spot price, because of forced liquidations of over-leveraged positions (traders go 10x or 20x on margin).

Do canny traders profit because of these “death spikes?” Of course they do.

Of course, memories are very short in crypto. Because we have recovered to $3000, we “only” have a drop of 21% from the beginning of the year.

But traders who bought at the “derivative” bottom would be looking at a gain of almost 38%, as opposed to a gain of 26% to those lucky enough to buy in at the bottom of the spot price.

But How Does That Help Unless We Can See the Future?

You can’t predict the future. But you don’t have to look at the spot price and think that’s the only price you have to pay.

You can pay less. If you are patient, sometimes there’s a firesale of nine percent off. That’s why you place “stink” bids all the time in the order books.

Or, I should say, that’s why I am placing stink bids in the order books this month.

After a correction of fifty percent (or even better, 80%), history says it’s a great time to buy. But nobody wants to. That’s why it’s the bottom.

I have been trading crypto seriously for five years now. I’ve seen a lot of bottoms. My nerves are always gone when the bottom is in. Always.

That’s why you put your stinks bids in before the dump starts. And you put them in very low.

What are the price targets of my stink bids?

I told my subscriber group my bids last week. And I will be putting those bids on the crypto future exchanges because if there is a dump, that’s where they will get filled.

What if the market doesn’t dump this month?

That’s fine. I am patient.

But When Do We Go Back In? A Very Short History of Stock Market Crashes

The Start of a New Boom or a Sucker’s Rally?

A Fabulous Year for Crypto-Stocks: Too Bad There are So Few of Them