Home  »  Analysis • Magically Predicting the Future   »   If the FTX Bankruptcy is so Bad, Why Aren’t We Dumping Harder? 

First off, if you are not sure whether to laugh or cry today, check out this twitter threat on the first day of investigation in the bankruptcy proceeding of FTX and Alameda: 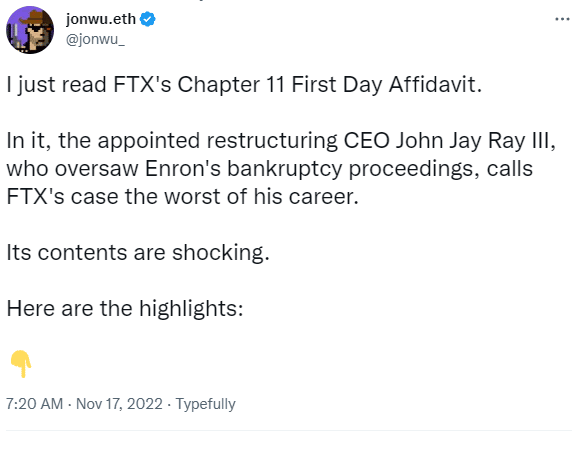 https://twitter.com/jonwu_/status/1593262926705487872
The fall of FTX is not just the worst bankruptcy in the short history of crypto. It’s beginning to look like the worst financial debacle of all time.

At the very least, it’s in the top three, and I can’t think of the other two.

Every major financial media outlet is covering this story, some doing a bang-up job, and some are just awful (the New York Times puff piece on Sam Bankman-Fried is particularly nauseating).

As a Canadian, I just have to say this: When Gerald Cotton ripped off depositors of more than $100 million in 2018, he at least had the decency to fly to India and fake his death.

But Sam Bankman-Fried? All week long, he’s been whining on Twitter.

Many questions remain about the future of crypto, but I will try to answer at least one:

Why aren’t we dumping harder? 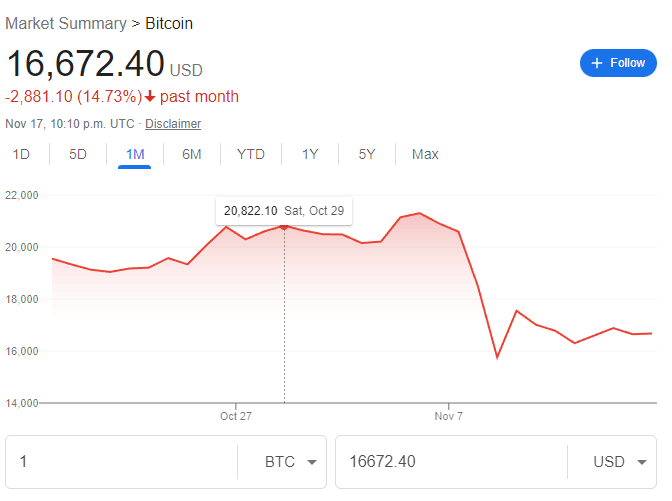 On November 6th, rumours of FTX being insolvent hit Twitter, and bitcoin was trading close to $21,000. It has since dropped about 25%.

We had a nice rally going before the FTX stink bomb dropped on the market.

In 2014 Mt. Gox, the largest cryptocurrency exchange in the world was hacked and bitcoin fell from being more than $1200 to under $100.

In 2018, the banking partner of Bitfinex (the same group that runs Tether) absconded with $800 million of their money and bitcoin fell from $6500 to close to $2000* in the space of fewer than two months.

Even in a “good” year like 2019, there were four months where it corrected 10% or more.
And let’s not talk about the crazy volatility of Ethereum over the last five years.

Let’s get the obvious reason out of the way. We already dumped once this year, in June, because of the LUNA stablecoin fiasco and the collapse of companies like Voyageur and Celsius.

You could argue that that bitcoin and other crypto coins have been hammered so hard into the ground, you need a pickaxe and dynamite for the price to drop any farther.

But there’s more to it than dump fatigue.

One constant recurring of crypto that I have written about time and time again is that crypto crashes frequently because of the EXTREMELY easy access to leverage.

You can borrow 5:1, 10:1, or even 100:1 on some exchanges. There has been no other asset class in the history of the world where investors get liquidated with such regularity.

But that’s not what happened this time.

But I should be more precise: It looks like investors never bought the crypto in the first place.

What happened was that investors thought they bought bitcoin (or Ethereum, or Ripple, or whatever) on the FTX exchange and left it there.

But now many believe that FTX never bought the crypto on behalf of the client.

For example, according to the books, FTX was “holding” more than $1 billion of bitcoin for their customers.

But nobody can find the bitcoin. ANY OF IT.

It’s now believed that FTX only ever bought bitcoin for their customers when the customer wanted to withdraw the bitcoin.

You can’t dump the bitcoin if you didn’t have it in the first place.

FTX was hypothecating customer purchases. That fancy word means that instead of buying the asset on behalf of the customer, FTX was just writing down an IOU in their internal ledger.

At the risk of repeating myself, there can be no FTX dump because there are no crypto-assets that FTX can dump. Well, except for their in-house FTT token and maybe Solana.

But I don’t care about those crappy tokens. Never did.

Now, does that mean crypto has hit the bottom and we are going to see a rally?

No, that is not a guarantee by any stretch of the imagination.

FTX did major damage in investor confidence. We may have seen the end of forced selling in crypto, but that doesn’t mean people want to buy in again.

If FTX wasn’t “blessed” by US regulatory authorities, they sure as hell looked the other way.

Nobody will be bragging at their company Christmas party about owning an NFT or yield farming some token named after a furry dog.

That only leaves the true believers. Is that enough?

he total crypto market cap is now about $1 trillion, the same as it was in January 2021, when the bull market really started to take off.

In the long run, we now have a lot of upside.

In comparison, The top five companies in NASDAQ have a market cap of $1 trillion or more (#6 is Facebook at $922 billion).

But of course, I don’t expect many investors to share my enthusiasm.

And you can be sure I’m going to keep very quiet about crypto when socializing at the various Christmas parties next month.

I’m not that stupid.