Home  »  Analysis   »   An Introduction to Bitcoin, Crooks, and the Myth of Anonymous Transactions

They think it’s wonderful to use for illegal transactions. If you want to sell something to somebody with giving up your identity, all you have to do is send them your Bitcoin wallet address.

You can be on a different continent from your wallet if necessary. The person sending you money doesn’t need your name, address, or phone number.

Then the criminals take their bitcoin to the one of hundreds of cryptocurrency exchanges all over the world and exchange it for fiat money.  Nobody knows who they are, where they are, or where the money went.

It’s perfect. Or so it seemed.  It was always something of a myth that Bitcoin was the perfect anonymous currency.

The backbone is Bitcoin is a very public technology called blockchain – it’s an electronic ledger – that holds the record of every transaction ever made. That half-Bitcoin you lost playing dice online in 2015? That funding transaction you made to the casino is embedded in the blockchain, for all eternity.

But the days are numbered for crypto-currency criminals.  Both the Market and police agencies are realizing the very public nature of blockchains can be used to get a very granular identity for users.

Criminals should now be very nervous.

And businesses are listening and responding to the call: 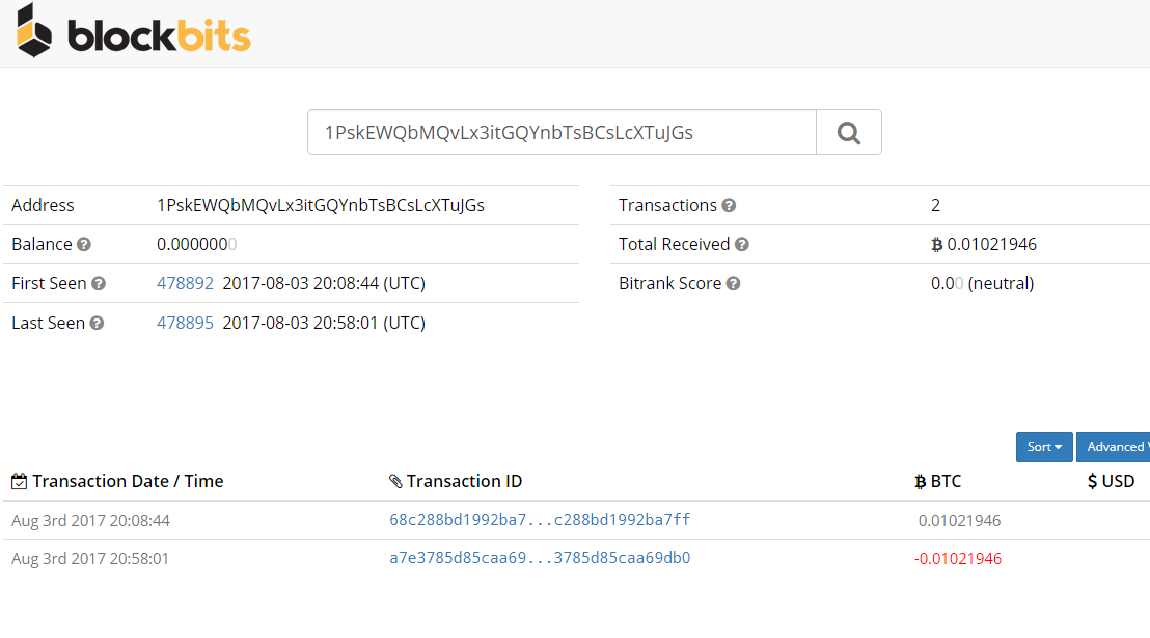 What you see here is a bitcoin tracking tool called a blockchain explorer, created by a company called Blockchain Intelligence Group. The website Blockbits is available free to the public.

They have a technology that helps identify Bitcoin/blockchain users.

Blockbits is a tool that can pull information (meta-data in techspeak) out of the blockchain about bitcoin transactions. To see what Blockbits can do, let’s take a closer look: 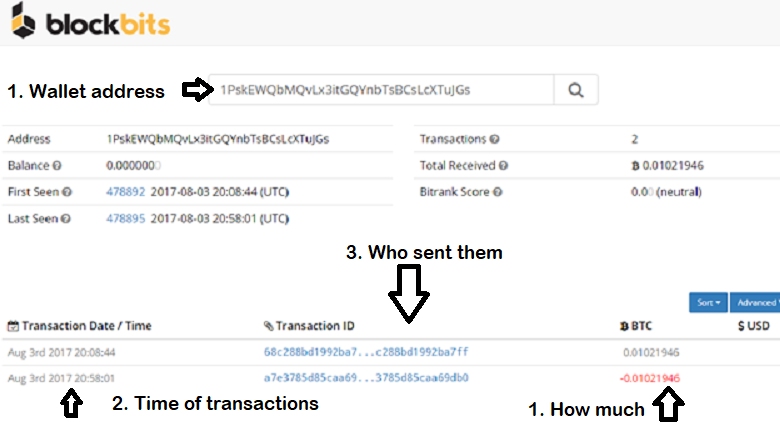 Let’s try to explain this screensnapshot:

Other information we can glean on this particular wallet:

So we can tell this wallet is not very active at all. That is to say, the owner of this wallet just used it to shuffle bitcoin in and out.

Perhaps it’s somebody just playing with Bitcoin for the first time.

But How is This Useful Again?

Now let’s pretend that this Bitcoin transaction was from one criminal to another, some guy  looking to buy illegal Kinder chocolate eggs and smuggle them into the US.

Let’s say some nefarious Canadian crook has set up a web site where you can order those illegal (but delicious) Kinder eggs and arrange for a smuggler to bring them right to your door. The crook posts his wallet address on the website with instructions to send 1 Bitcoin (buy in bulk and save) and you will receive one crate of Kinder eggs!

Let us assume that the Department of Homeland Security has set up a special task force to cut down on the trafficking of illegal Kinder eggs from Canada to US. They surf to the website and take note of the wallet address.

In setting up the sting operation, they use this tool to verify transactions made to the operation, as an independent tool that can be used as evidence in a court of law.

Better yet, they can track the Bitcoin (the “sting” money) to any other wallet, thus making the concept of throwaway wallets almost useless, or at least way less effective.  In the past, to evade detection, criminals created dozens of wallets and shuffled Bitcoin between them, to evade the authorities.

That is what the Blockchain Intelligence Group guys have freely available on the web. And they have promised more to come.

“We do intend write our block explorer with more features,” says Shone Anstey, President and Co-Founder of Blockchain Intelligence Group.

“Our custom block explorer is written from the ground-up and so gives us full control. It in our feature roadmap, it will be a mini-portal for analytics that everybody can have a look at. We are trying to get something up for 1st or 2nd quarter of next year.”

Be aware that Blockbits is just the free stuff that the B.I.G. team is giving away to the public.

Their other paid product at present cater to law-enforcement agencies and so in interviews with the co-founders Shone Anstey (President) and Lance Morginn (CEO) were reluctant to show demo of Qlue for the general public.

But I think I’m allowed to say that from what I saw Qlue, is much more powerful than Blockbits. And law enforcement agencies are using Qlue today against Bitcoin criminals.

One last (but very important) thing to know about the B.I.G. They own their code:

“We needed to get back to the fundamentals. Write up the core engine that studies the blockchain as a custom block explorer that gives us total control,” says Shone.

This is what differentiate these guys from the pack.  They own their code, not ripping it off from Github. If you look at other blockchain explorers, they have less features and are even buggy.

Shone goes so far as to say “Public block explorers do not correctly parse and display all transaction data.”

For example, some Bitcoin wallets need multiple signatures or “confirmations” before they accept Bitcoin. Blockbits can correctly read “multisig” wallets while the other block explorer cannot. When trying to put bad guys away in court, you can’t have bugs like that in your software.

When nobody mainstream was using Bitcoin years ago, there were a lot of…the darker side of humanity using it.

But now that the market cap of all cryptocurrencies in the world is now more than $100 billion US.

Bitcoin itself has a market of $65 billion and the Market—with technologies like Blockbits—and police are making it a more legitimate business venue.

Criminals should be very nervous

The Blockchain Intelligence Group is being acquired by Acana Capital Corp. (CSE:ACM) (FF:711) in a private financing. I am a participant in the private financing. Note (obviously in my opinion but hey the lawyer says I have to do this,) this is not a recommendation to buy or sell any security.