It’s easy, every gambler in the world is betting on Bitcoin futures. Let me explain:

In case you missed it, Bitcoin has been on some wild ride the last two days. 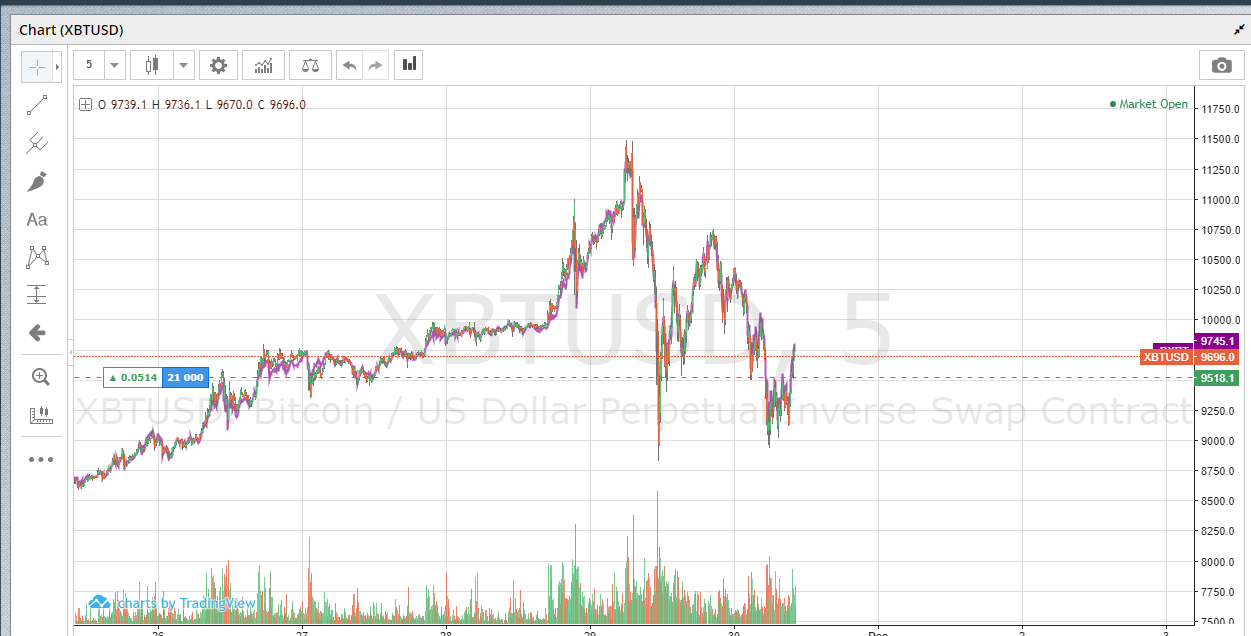 This is a chart of the XBTUSD futures on Bitmex, the largest Bitcoin futures exchange in the world. The XBTUSD futures contract is a perpetual swap contract (no end date) that instead pays a daily interest rate (or a negative interest depending on market sentiment).

The exchange went full Skynet meaning only timed and triggered trades were executing by automated trading bots. You couldn’t place a manual trade as the system was overloaded (I know, I tried).

But wait there, there’s more.

But Why Is This Happening?

A key strategy of futures trading is trying to screw the other guy out of his money. If you see a big short position, and if you have enough juice to move the market, you go long to force the other guy to liquidate.

When faced with a margin call, the short guy has is forced to buy on the open market to cover his short, thus driving the price up even more. Then you close your position at a profit.

It can work the other way too. If you see a heavy leveraged long position, you sell to force the price down and thus the longs  have to liqudate their position.

This is exactly what has been happening on Bitmex for the last two days. Look at the Bitmex chat box from Wednesday: 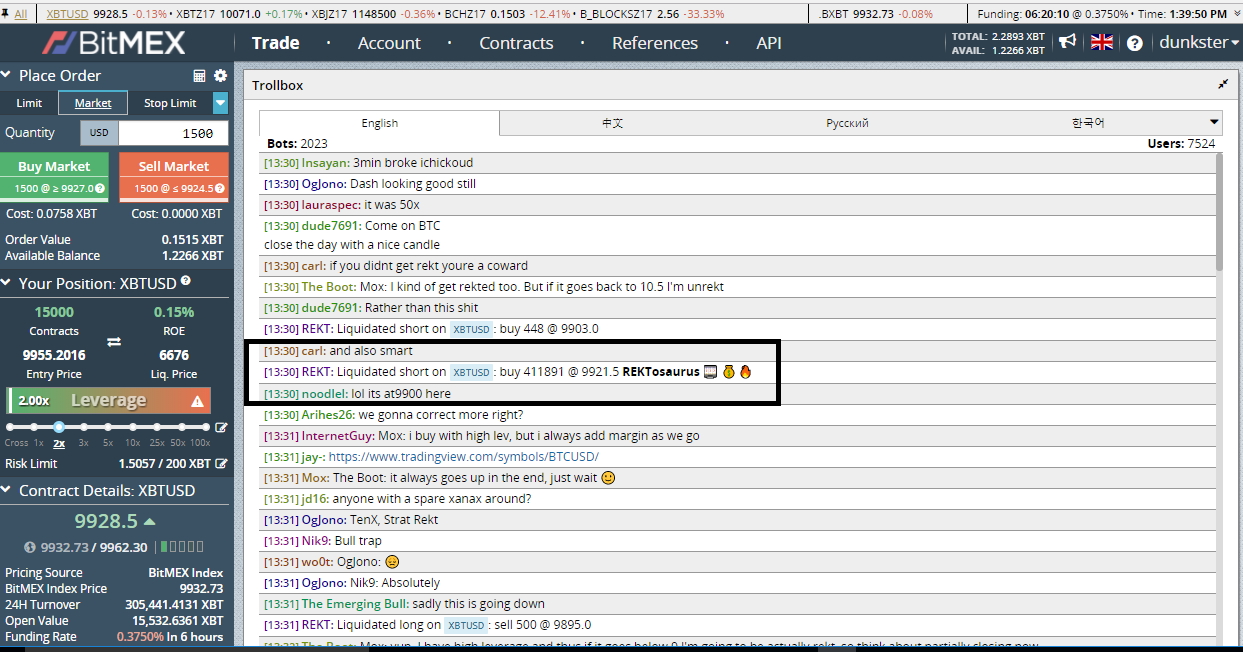 The chatbox has many automated bots that send in reports. This is from the “liquidation” bot that reports when a position is filled because of a margin call.

When XBTUSD hit 9921 yesterday, a group of investors (or perhaps just one) were forced to close out their position.

If you don’t understand how leverage works in dealing with XBTUSD futures, I will explain what this means.

If you went short at 100x leverage, that means you bet $100 USD that Bitcoin would go down. But you put up only $1.If Bitcoin goes up by only 1 percent, you are faced with a margin call and you are forced to liquidate.

But of course, you only lost one dollar.

If you went short at 50x leverage, that means you bet $100 USD that Bitcoin would go down and you only put up $2. Now Bitcoin needs to go up by 2% for you to lose your money. But you have lost double, or $2.

If you follow the logic this means with 10x leverage, Bitcoin has to go up by 10% for you to get wiped out. But you lost ten dollars, or ten times more than with 100x leverage.

These forced liquidations happened all day long, as the whale traders whipped the price of Bitcoin up and down, swallowing up minnows every hour on the hour.

But wait you say, are you telling there is Bitcoin price manipulation by large (overseas) investors?

So the next time you are having beers with your friends who are wondering about the latest spike (or crash) in Bitcoin, you can show them this article.

What Lessons Can We Learn From This?

Don’t be a gambler.

Don’t use 100x, 50x, or even 10x leverage. Even using 5x leverage, you can still be wiped out if Bitcoin drops more than 20%.  On Thursday the XBTUSD contract dropped 25% in a matter of hours.

If you are patient, you can find plays on Bitmex that return a ridiculous profit and you can hedge those bets. I wrote about a covered hedge opportunity here: How I made 40% with no risk.

You can also explore the more technical side of Bitmex. Beyond the usual market and limit orders, Bitmex offers the ability to set “trigger orders” that only fire when certain conditions are met, like if the future price has dropped (or risen) ten percent.

There are lots of guys with a good understanding of charts and the technical side of Bitmex who are making good money.

But there are a lot of fools throwing their money away too.