Home  »  Analysis • News   »   Which Digital Coin Will Next Soar in Value? Check with Coinbase

The crypto-currency exchange Coinbase listed Bitcoin Cash for trading  on December 19th, and the coin exploded in value. 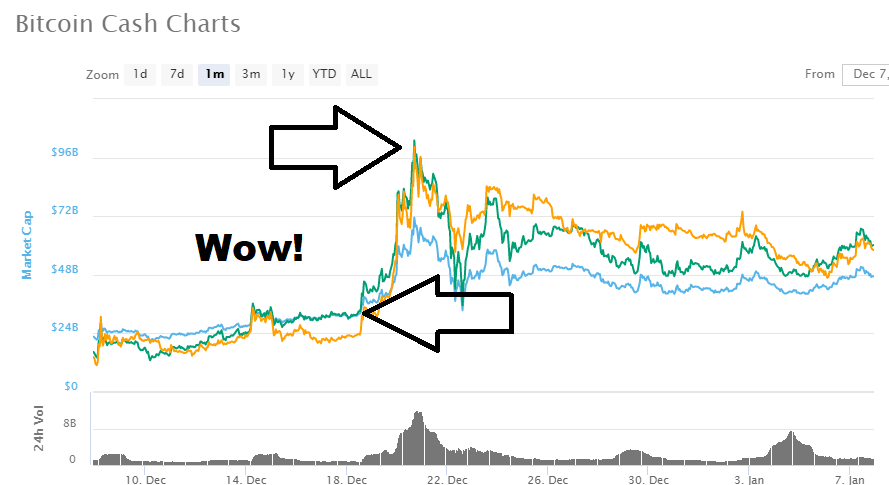 Overnight doubles are pretty rare in the investment world, though in crypto-land it happens a bit more frequently. It’s the sheer magnitude of the move that is stunning; tens of billions of dollars in value was created in less than 24 hours.

Let’s put this in perspective: The largest hedge fund in the world is Bridgewater Associates with US$122 billion in assets, which had an increase of 17% from the previous year. Bridgewater “only” went up by US$18 billion for the whole year.

Berkshire-Hathaway? Its market cap went from $403 billion to $493 billion in 2017, or up $90 billion.  So, it beat the Bitcoin Cash listing (thankfully the world has not gone completely insane.) Of course it took a year to do that.

So This Happened Just Because of Coinbase?

Coinbase has more than 13 million customers and is really the only major cryptocurrency exchange that is accepting new business. Coinbase is not an 800-pound gorilla, it’s more like one of those robots that was in the movie “Pacific Rim.” 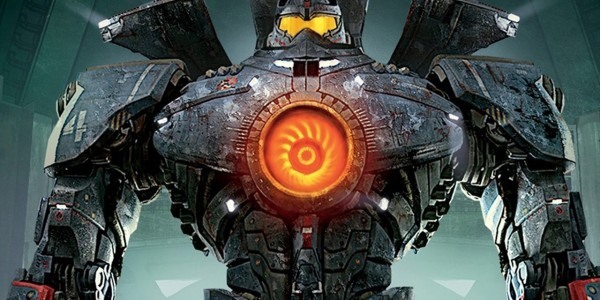 How did Coinbase get so big? It’ a classic case of an overnight-success that took only seven years of hard work.

Coinbase was founded in July 2011 to take advantage of the Bitcoin “bubble.” You see, that year, Bitcoin went from 8 cents to an absurd 31 dollars, before crashing to 8 dollars later that year.

Over the years, Coinbase has survived and mostly importantly, it has never been hacked.

Also, it is pretty obvious by now that the CEO and founder, Brian Armstrong, is not in the business for quick buck.

Seven years of slogging building a real business in the world of cryptocurrency gets you massive street cred that can’t be bought.

When Brian speaks, the crypto-world listens. When Coinbase lists a new coin, it’s like the Pope has given a blessing from the Vatican.

The Billion Dollar Question: What Coin will Coinbase List Next? 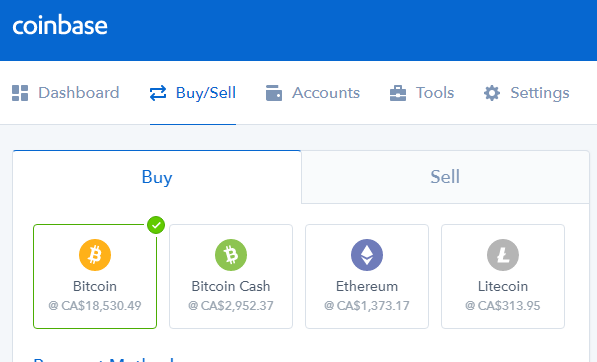 Let’s compare that chart with the top twelve cryptocurrency coins by market cap: 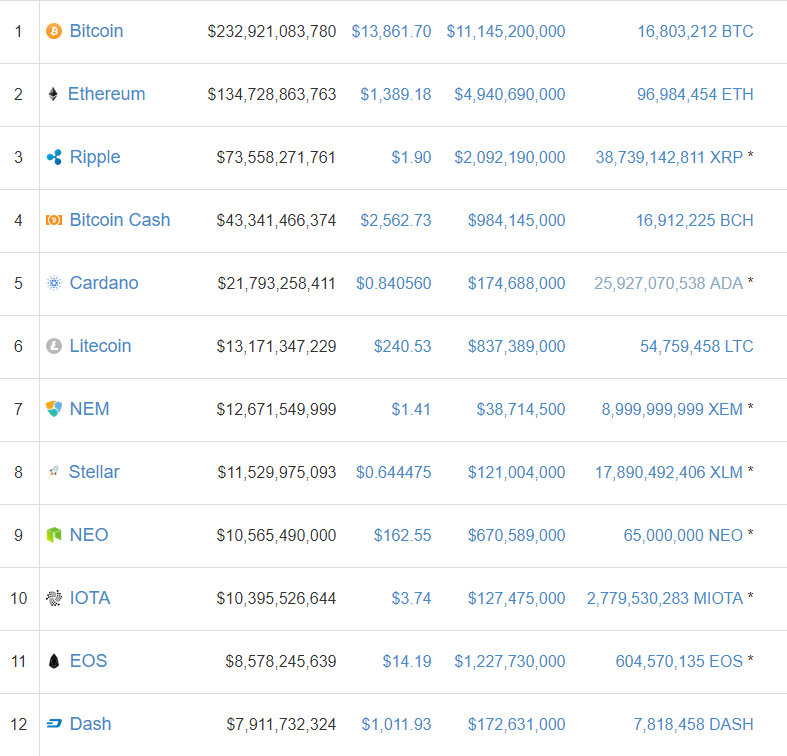 You can see there is a huge cluster of coins in the six to twelve spots with a market cap between $6 billion and $15 billion USD.

But let’s apply one more filter: The historical market cap from January 1st, 2017: 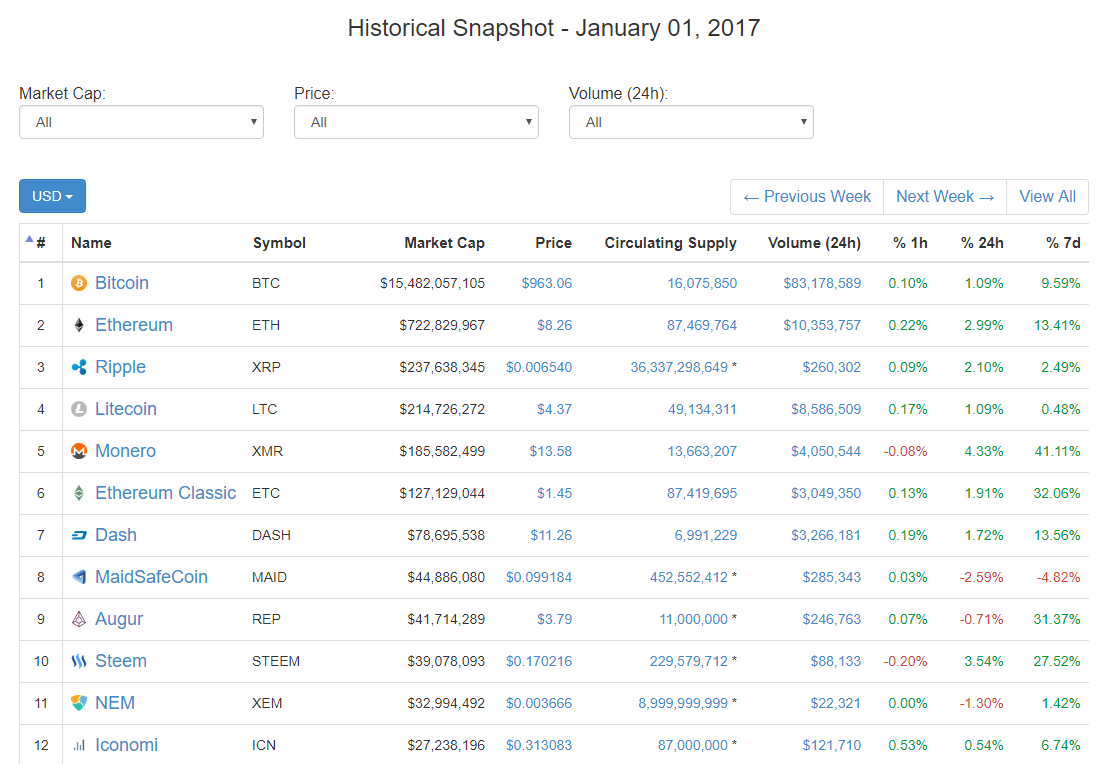 Why is the historical chart important? Well, in my opinion, the “whales,” or the big players in the cryptocurrency world, can pump the price up of any coin (including Bitcoin) on any given day or week or month. They can even pump other indicators like transaction volume.

A coin with a decent market cap that’s been around for a while should have some intrinsic value and should be less prone to market manipulation.

Therefore, excluding the coins already listed on Coinbase, we have three candidates: Ripple, NEM and DASH.

Ripple has been around for years and now has a market cap of close to $100 billion USD. I’m not sure why it isn’t already listed.

There was a tweet from Coinbase CEO nearly three years ago saying that he didn’t like Ripple (the coin is issued by a privately-held company)  but I’m sure the prospect of massive listing and trading fees would change his mind, if it hasn’t already.

What is NEM? It’s hard to summarize NEM in a single paragraph. Let’s just say it’s a cross between Bitcoin (it’s a blockchain) and Ethereum. NEM has a feature called Smart Asset system that is like Ether’s smart contract feature.

It’s run by a public foundation, so the governance model shouldn’t raise any red flags. My only concern with NEM is that it’s not listed on very many cryptocurrency exchanges: Coinmarketcap lists only 25 exchanges where it’s actively traded with any kind of volume.

The third coin on the list is DASH. I’m a big believer in DASH. It’s been around for years; the market cap is big but still lots of room to run. The governance model is highly functional, and it’s listed on 100 cryptocurrency exchanges  and there is significant trading volume on 80 of them.

Finally, there is a thread on Bitcointalk speculating that DASH is the next to list on Coinbase. So how do investors take advantage of this potentially huge, near-term uplift on DASH if it gets listed on Coinbase?

I’ve discovered a great way to play this—I’ve met the management, studied the company and I’m going to tell you all about it on Wednesday. Stay tuned.

P.S. Going to the North American Bitcoin Conference next week in Miami. Lots of DASH folk will be there (they are hosting one of the parties). If you are going and want to meet, let me know by shooting an email to ross@newcurrencyfrontier.com