Barclay Equity Research, a division of the Barclay Investment, just released a thirty-page report on cryptocurrency that states we have reached the peak and there is no way to go down except down.

I can’t link to the report as it’s a private document, but if you can get your hands on it I do recommend reading the first half of the report at a minimum. And the Economist comments on it here.

I quite enjoyed reading the first ten pages of the report which gives a short summary of the history of “private” money of the last five hundred years, such as the introduction of bills of exchanges and the discount rate of dollars bills issued by US banks in the 19th century.

But I disagree with the conclusion.

Barclays is bearish on the future of cryptocurrency for two reasons:

If you plan on becoming a serious (or even semi-serious) investor, it’s worth becoming very familiar with these arguments, as they have been circulating in the crypto-community for years.

I can’t sensibly refute a thirty-page report in several paragraphs.

But I can say these are interesting theories but what is happening in real world?

And in the real world, cryptocurrency is doing quite well in at least one industry.

Guess Which Industry Will Make More Than $50 Billion This Year?

When people learn what I do for a living, the most common question I get asked is:

“Yes but what is Bitcoin used for?”

Gambling. Or, to be more specific, online gambling. 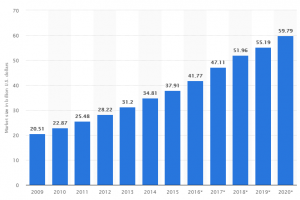 The amount of money wagered in online gaming sites was estimated to be $550 billion USD in 2016 and to approach $1 trillion USD in 2021, according to Juniper research.

Now is here literally the trillion-dollar question: what percentage of online gaming patrons use cryptocurrency (or to be specific, Bitcoin) to wager?

A Bloomberg Intelligence report gives us a clue:

“Cryptocurrency-funded gambling is on the rise for offshore bookmakers, with more than 40 percent of online bets funded via cryptocurrency at one of the largest and best-known online sports betting sites.”

The report focus on the website Bookmaker.eu which is considered one of the top 5 sports betting sites in the world. By the end of 2017, 42% of the customers had used cryptocurrency for deposit and fully 82% had chosen crypto to receive withdrawals.

And here is the shocking bit of the article: By the end of 2018, owners of the website expect both deposits and withdrawals to be 100% crypto.

It looks to me like just the online gambling industry will be a significant, if not the most significant, market of cryptocurrency for the foreseeable future.

Does the Barclay report mention online gambling at all? No, and it’s a very good, comprehensive report.

But it missed something “big”.

I see many reports on cryptocurrency that echo many of the same sentiments as Barclay (governments are going to ban crypto, junk coins will cause a bust).

There is even a running joke in the Bitcoin community: “Look Bitcoin is down because China has banned it… for the seventh time.”

There are so many theories and predictions about where cryptocurrency is going (down, mostly) that it seems a new report comes out every week.

But actual reporting on what cryptocurrency is used for? That’s much harder to find. But when you find it (like the Bloomberg report which took a lot of digging), the long-term for cryptocurrency looks bullish.