Cryptostar (CSTR-TSXv) released its first-quarter earnings yesterday and the stock closed at 0.09 cents (CAD), or up 50%. Today it closed down to 0.075 cents.

Cryptostar traded as low as 0.015 cents earlier this year. 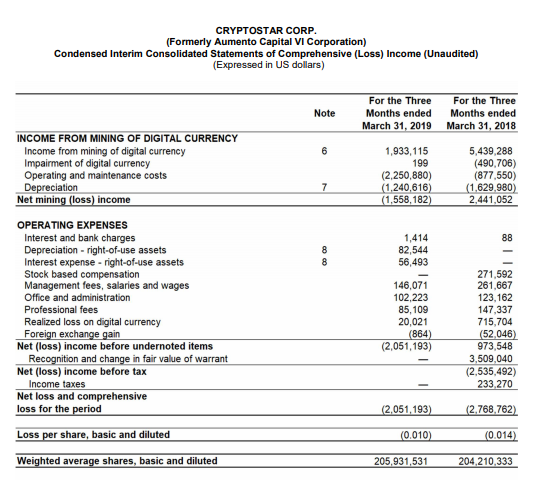 At first glance, it seems odd that the share price would jump after a company shows a loss, but of course the price of bitcoin has soared since the price of March and we can assume that operating costs have stayed the same.

How much bitcoin did Cryptostar mine in first quarter 2019? Their press release says 517. Taking today’s bitcoin price of $8800, that would be worth $4.5 million USD, or more than double the $1.9 million revenue reported in the first quarter.

Suddenly, that $1.5 million loss is now a $1 million profit.

The low trading volumes makes it very difficult to accumulate shares. Only 714,000 shares ($64,000) were traded yesterday, when earnings were announced!

But What About the Dreaded Mining Curve?

If you traded in bitcoin mining stocks in early 2018, you saw firsthand what happens when the mining difficulty increases. Unless the price of bitcoin keeps increasing, earnings plunge.

It is safe to assume that Cryptostar (unless it expands capacity) will not mine 517 bitcoins in second quarter 2019, as the higher price of bitcoin will bring in more competition.

This can be seen in the increased difficulty curve for mining bitcoin:

At the difficulty is starting to creep up, but it’s not increasing nearly as fast as the price of bitcoin.

The big question is if bitcoin continues to climb towards $10k and beyond, will we see some serious increases in mining difficulty?

The answer should be “yes,” as mining yields would become even more ridiculously profitable.

However, there looks to be lots of room to run for the next few quarters at least. Both Howe Street and Bay Street still hate anything crypto-related because of the 2018 fiasco, so it’s going to be hard for these companies to raise money to buy new rigs anytime soon. 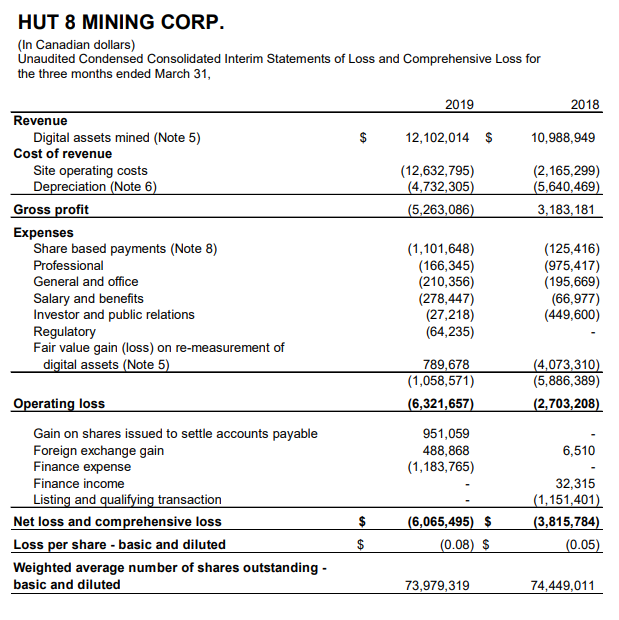 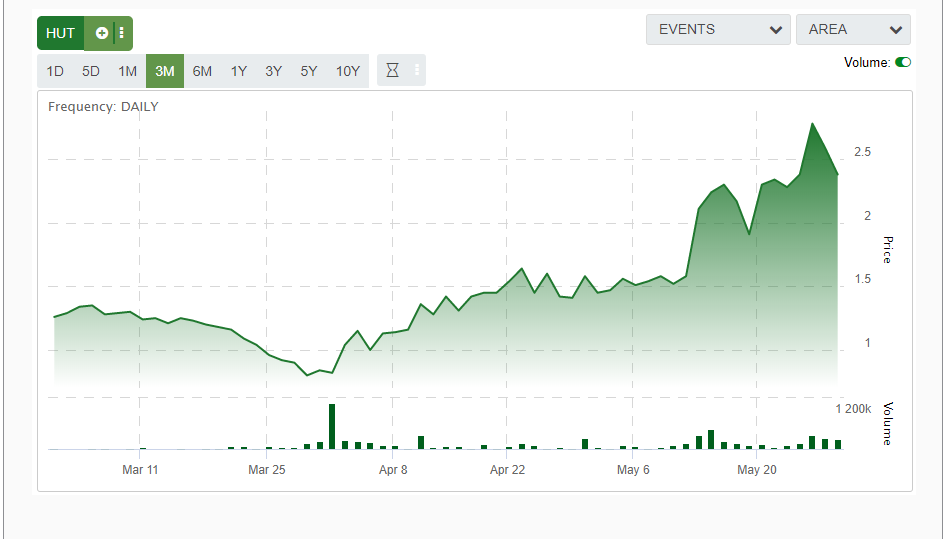 One last note, unlike Cryptostar, which sells bitcoin as fast as it is mined, Hut 8 has 2615 bitcoin in its possession, which is worth about $31 million CAD.

Can the share price go even higher after tripling in only two months?

Both Cryptostar and Hut 8 are asymmetrically correlated to price of bitcoin. That is to say, if bitcoin goes up 50%, expect these stocks to easily double.

If bitcoin drops 50%? Then these stocks will head right back to where they were at the beginning of 2019

I THINK bitcoin is on a bull run which will last to the end of 2019. However, if things head south for a prolonged period, these stocks will drop hard.

Note: I own both HUT 8 and Cryptostar. Nothing that I write should be construed as advice on investing.