The euphoric summer of 2019 is now past and we are well into the gloomy autumn.

Now the twitter feed is clogged with bearish predictions of bitcoin and the death of crypto. Again. 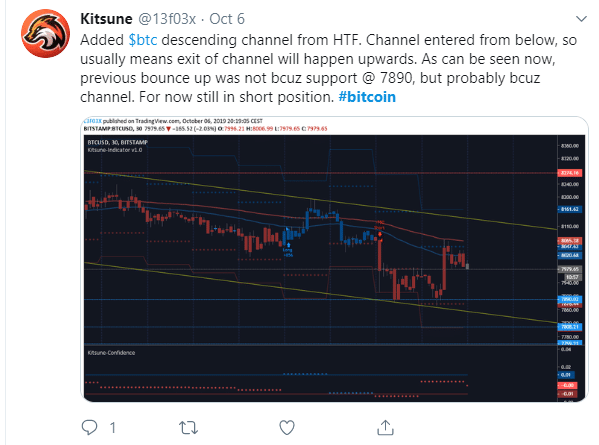 Yet another random bearish bitcoin chart

Never mind that nothing is new under the sun. Traditionally Bitcoin does well in the spring and not-so-well when summer ends.

As a matter of fact, September is the worst month of the year for bitcoin, dating back to 2013, with a cumulative return of NEGATIVE 38.9%.

The best month for bitcoin is the month of November, with a return over seven years of nearly 700%! That is even more incredible considering bitcoin had a tumble of 34% just last November.

As the saying goes, correlation is not causation, prior performance cannot be taken as proof of future performance, and so on.

But a gloomy September is more the norm than the exception.

Tether is the Canary in the Coal Mine, Not Bitcoin

Even though bitcoin has a market cap of nearly $150 billion, the fact that so many people hold to their bitcoin means that relatively small amounts of capital can move the price in either direction.

A buy (or sale) of as little as $10 million worth of bitcoin can move the market more than 5% in either direction.

Therefore, price is not a good indicator of whether investors are fleeing or not.

Tether, the stable coin that is backed one-for-one by the US dollar, is a much better indicator.

The blue line, the market cap of Tether, tells the story.

Note the increase in Tether supply from beginning of November 2017 to end of October 2018.

Even though many remember that as a bear market, bitcoin in that period had gone from $5500 to $6350.

Then it moved to its current price of $8000, as the market cap of Tether doubled.

The problem with using bitcoin price to determine market sentiment is that it is noisy.

Fluctuations in price have less to do with investor sentiment than with speculators trying to fake each other out as to profit on the futures exchanges.

When the market cap of Tether goes up, the price of bitcoin goes up, in the long run, with serious fluctuations along the way.

When investors redeem their Tether for real US dollars, look out below.

If you look at the Tether market cap, you can’t help but think but investor sentiment in crypto in general is still strong.

We just had a lousy September, as usual.