First the bad news. The bloodbath continues in the land of Ethereum tokens: 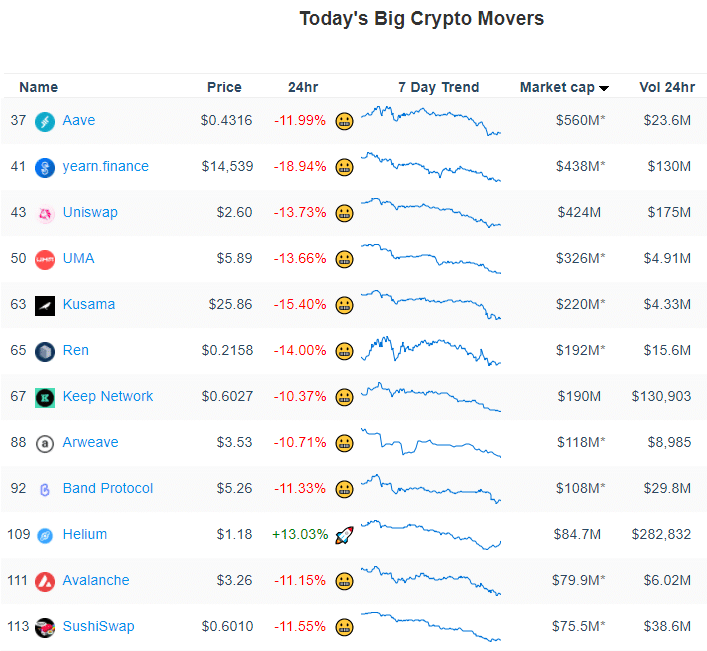 This is not a surprise to anybody willing to look at the state of the Ethereum network. It has been running at full capacity for months, and as a result, gas prices are ridiculously expensive:

I need to explain this chart to you. The price of gas on the Ethereum network dictates the cost of executing contracts (such buying tokens on Uniswap for example).

You pay the gas price with Gwei. One gwei is worth one BILLIONTH of an Ethereum. It is estimated that the price of executing a reasonably complicated contract should only cost as much as 1 million Gwei, or about 35 cents.

But that’s not happening. During periods of peak volume, some Defi users were reported transactions fees as high as $99 USD.
Vitalik Buterin (the founder of Ethereum) noted that he bought an Augur contract last week and it cost him more than $17 USD (Augur is a prediction market that uses the Ethereum network).

The Ethereum network is clogged. It’s been that way for years. Ethereum 2 is supposed to fix that problem with the implementation of “sharding.”

But how far off is the full implementation of sharding? More bad news from Vitalik Buterin:

“The eth2 roadmap offers scalability, and the earlier phases of eth2 are approaching quickly, but base-layer scalability for applications is only coming as the last major phase of eth2, which is still years away.”

https://ethereum-magicians.org/t/a-rollup-centric-ethereum-roadmap/4698
At first glance, it seems we are stuck with the 15 transactions per second hard limit of Ethereum for the foreseeable future.

But salvation is on the way.

What is a Rollup and How Can It Save Ethereum?

In the same article, Vitalik makes this prediction:

For the layman (and the average crypto investor), the big question is, what is he talking about?

Rollups are what is called a layer 2 scaling solution.

Think of the blockchain of Ethereum, where all the transactional and contract data is stored. That’s layer one.

But what if the data is stored outside the blockchain, on what is called a sidechain? That would be a layer 2 solution.

The blockchain itself could execute transactions faster, if it didn’t have to digest all that data, but instead could work with a summary of the data in the sidechain, or what is called a rollup.

Roll-ups sound like a simple solution, but they are not.

One problem is the integrity of the data. How do you prevent it from being compromised?

Another problem is how to summarize the data so that the rollup has enough information passed on to the main blockchain so it can correctly process the transaction.

But there are a ton of development teams that are experimenting with rollups. For example, there is unipig . It a demo of Uniswap using rollups that allows for 200 transactions per second.

That’s is more than 10x the speed of the real Uniswap, which does about $400 million trading volume per day.

The current roadmap of the release of Ethereum 2 calls for first release in late 2020 (probably November) and will be called phase 0. It won’t have much functionality but will set the framework  for phase 1 and phase 1.5 implementation, scheduled for 2021.

At present there are too many testnets to count that are showing rollups increase the transaction speed of Ethereum by an order of magnitude.

It’s not vapourware. Some sort of rollup is going to included in a future release of Ethereum. Count on it.

Vitalik is optimistic that some sort of rollup can be included during phase 1.5, or 2021.

The smart players in this niche are preparing for this. Not getting excited about Ethereum right now, but patiently waiting for the new year.