Home  »  Analysis   »   The Best Investment Book You Will Read this Year 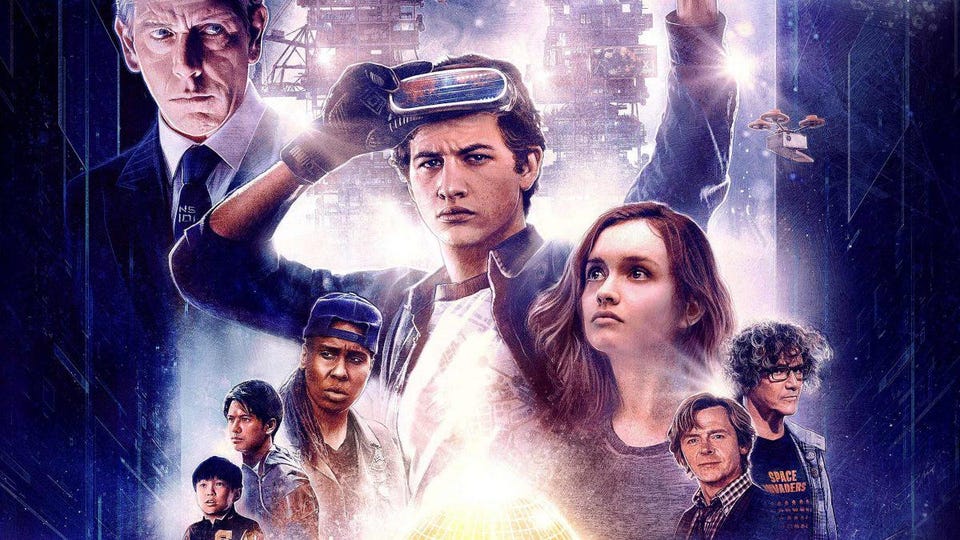 In case you don’t know the plot already, it’s about a boy who solves puzzles in an online world and wins a lot of money and gets the girl in the end.

And how is this a book about investing? Let me try to explain.

There are a lot of people looking at the world of crypto and thinking, should I go in?

But the people who are already living and prospering in the world of crypto, are looking at the metaverse (or metaverses) and thinking, should I go in? 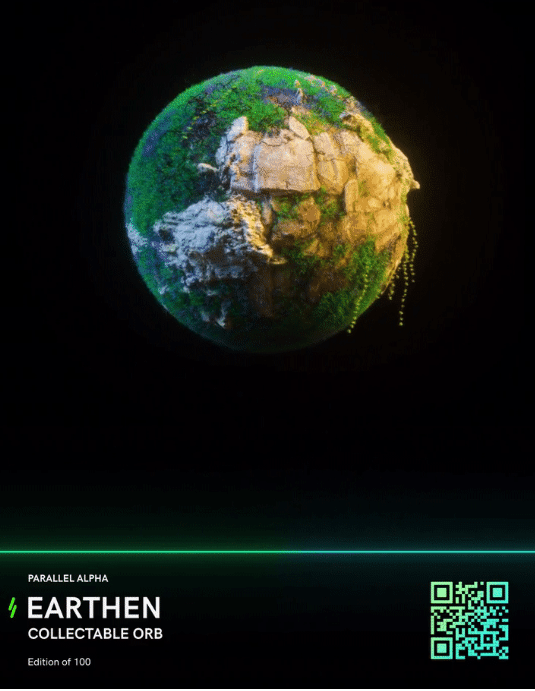 https://parallel.life/cards/?parallel=earthen
Ready Player One was published in 2011. And in ten years this world has moved a lot closer to the world portrayed in the book.

Signs of the metaverse are showing up in my investment portfolio.

Remember September? Everything in my crypto portfolio was down for the month. Stocks, coins, and tokens. Except for one: 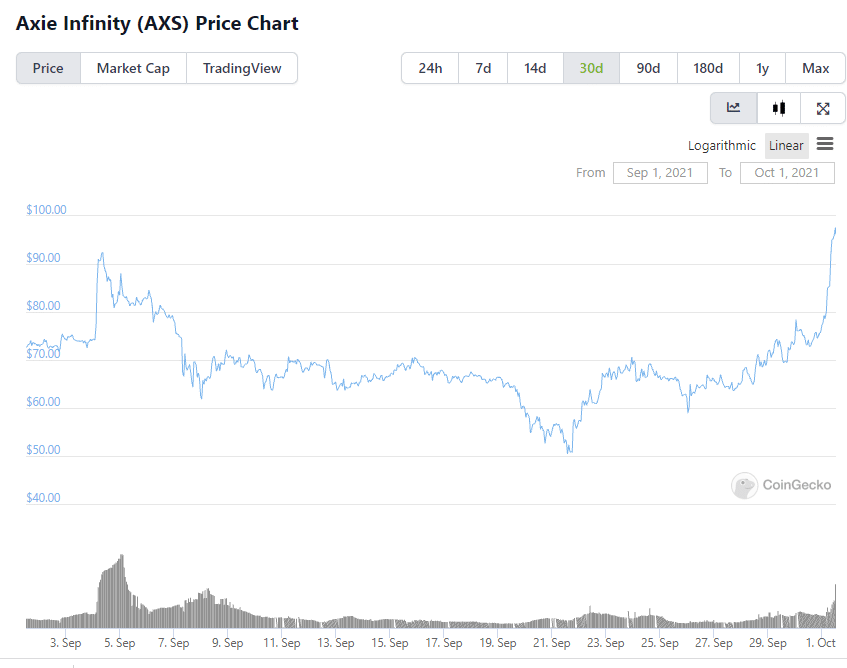 Today it reached an all time high of $145 with a fully-diluted market cap of $38 billion.

Axie Infinity is a game a little bit like Pokemon except players can win tokens by winning matches.
In the month of September, nearly 20 million people played the game.
To put that into comparison, nearly 10 million people watched the 2020 World Series of baseball, and 93 million watched the 2021 Super Bowl.

Let’s be honest, why are you interested in crypto? Is it because:

1)     You want the world to be free of government intervention in matters of currency.
2)     You are fascinated by the technical potential of public blockchains?
3)     Outside of your crypto-holdings, your investment portfolio has been a flaming dumpster fire.

Don’t be ashamed to admit it’s number #3. As Arthur Hayes of Bitmex notes in his blog, it’s been tough time for investors for a very long time. Cue the depressing stats sheet.

Bitcoin (Under) Over Performance vs. Fed Balance Sheet

Hayes makes the argument that investors need to value investments in their relative performance to the US federal balance sheet, which as we all know, has grown enormously in the last decade: 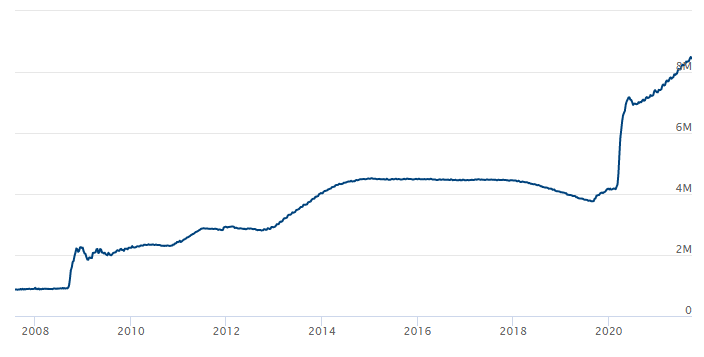 https://www.federalreserve.gov/monetarypolicy/bst_recenttrends.htm
Of course, the story today is we are finally going to have a general commodities boom and yes, some people are going to make a ton of money exploiting the shortages and snafus in the supply chain at present.

But remember the last commodities boom was driven by the relentless growth of China back in the 2000s. The current bout of commodities inflation is being caused by COVID disruptions.

How long is inflation going to last? Everybody says the system is broken, and we have inflation now and forever.
I’m not so sure. To me, this decade just looks like a repeat of the fifties: 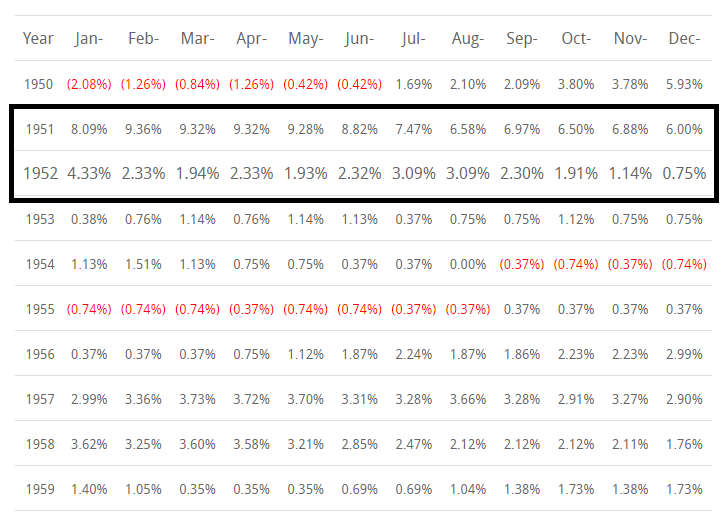 Note that inflation was benign for much of the fifties, except for the years in which US military forces were fighting in Korea.

Once the war was over, price controls were lifted and the economy had a short, sharp rise in inflation.

Does that sound familiar?

We haven’t had price controls, but COVID restrictions have had much the same effect.

So where do we go, for this decade, to get a reasonable return on our investment?  The real world isn’t looking so hot to me.

We must move on to the new world. The world of metaverses.


I have been investing in the stock market since 1996 (that’s not a typo). One of my great regrets is not keeping various articles that stated opinions that turned out to be completely wrong:

The scary thing to note is that most, if not all those articles, were written by very smart people.

It’s not the dummies you have to watch out for as an investor. It’s the charismatic smart guys who decimate your portfolio, who build convincing narratives that are wrong.

As I enter my fourth decade of investing, I’m not getting any smarter, but experience gives you a better sense of pattern-recognition. And here is a pattern for you:

It’s the weird stuff, the bets-against-conventional wisdom, that has for me been the best investment plays of the last twenty-five years.

Get there first. Try to understand what you have on the other end of the fishing line. But don’t spend too much time trying to figure it all out before putting your chips on the table.

Ignore the smart guys who don’t bother trying to understand the new new thing but write very clever article putting it down anyways.

At the very least, you should read the book.