But Nasdaq has been flat since last April. Even bitcoin is in the red.

Keeping your money in the bank means you are guaranteed to lose eight percent in purchasing power this year.

In a recession, it’s only the people who lose their jobs that get hurt.

In times of high inflation, everybody bleeds.

But crypto has the answer: interest on stablecoins.

Voyageur is offering 9% on USDC deposits.

Crypto.com is saying 10%.
Celsius is just a bit under 10%.
However, there is a problem (and it’s not what you think at first).

They hate stablecoins. And they especially hate companies that offer yield on stablecoins.

They are doing everything they can to shut them down.

Just yesterday, Celsius put out the news that US investors won’t get yield on new deposits unless they are accredited investors:

“New transfers made by non-accredited investors in the United States will be held in their new Custody accounts and will not earn rewards. Non-accredited investors can continue to swap, borrow, and transfer within their Custody accounts based on their local jurisdiction.”
Translation: Unless you are early to the game, or you are rich, no soup for you.
Celsius is by far not the only one facing the wrath of the regulators.

Voyageur is under regulatory assault as well. From a March 30th press release:

On March 29, 2022, Voyager Digital LLC, Voyager Holdings Inc., and Voyager Digital Ltd. (together “Voyager” or the “Company”) received the following orders from certain state securities divisions that are members of a multistate working group of North American Securities Administrators Association in respect of the Voyager customer accounts that permit customers to earn rewards on their crypto balances (“Voyager Earn Accounts”). Voyager is aware of or has received cease and desist orders from the state securities divisions of Indiana, Kentucky, New Jersey and Oklahoma, and orders to show cause or similar orders from the state securities divisions of Alabama, Texas, Vermont and Washington. These state orders generally assert that Voyager was offering and selling securities or investment contracts in the form of Voyager Earn Accounts unregistered with the applicable state.
That’s eight US states that have told Voyageur to stop doing business in their backyard.
Ever wonder why Coinbase doesn’t offer yield on their stablecoins?
They wanted to, but the SEC filed suit back in 2021 over their plan to offer crypto-lending products. So they backed down.
The regulators make the argument that these products are not “safe” and should be kept out of the hands of the retail investor.
I would argue not. But who cares about my opinion?
What is far more important does the average retail investor care about the opinion of the SEC and various state regulators?
The answer is in the chart below: 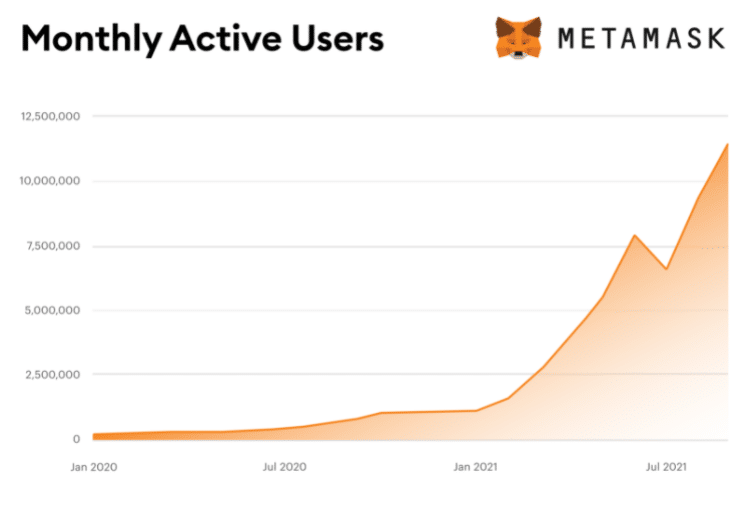 This chart is from mid-2021. At the end of 2021, the latest official estimate is that there are 21 million active users of the Metamask platform.
Not all of them are US citizens, but you can bet it’s a significant chunk of the user base
If you don’t what Metamask does, it’s a crypto-wallet that is an extension on your web browser.

People can use it to buy crypto, and transfer their crypto-tokens to other wallets, and most importantly, send their tokens to smart contracts which offer yield on their tokens.

https://www.stakingrewards.com/stablecoins/
The website above shows which stablecoins offer what kind of yield and where on the Internet you can go (with your Metamask wallet), to deposit your crypto and access that yield.

No brokerage account required. Just you and your well-funded Metamask wallet.

So, let me summarize the situation:

Investors are desperate for yield on their assets. There is no yield to be found anywhere in the traditional financial markets and inflation is running at more than eight percent.

But you can find yield on stablecoins in the land of crypto. And there are companies in the traditional financial sector that offer the retail investor the opportunity to access that yield.

But those companies are under regulatory attack and access to those yield-bearing products is slowly being withdrawn from the market.

Okay, so how is the average retail investor reacting to the new regulations?

Looks to me like they are starting to bypass the traditional financial markets to access the yield-bearing assets directly in the public blockchain, by using tools such as Metamask.

How Is This Going to End?

This situation reminds me of the “Napster” wars in the early 2000s (although the stakes are much higher).

Filesharing just hit the internet and young people started to share their electronic music files through a program called Napster.

The recording industry which made all its money through the sales of CDs, went bananas and through the Recording Industry Association of America, sued everybody in sight.
They managed to get Napster shut down, and I think they won every lawsuit that they ever filed.
But when is the last time you bought a CD?
The RIAA won every battle in the Napster war and still lost.
Does history repeat?
No, but it rhymes.

How many retail investors under the age of 25 have a brokerage account, and how many of them have Metamask installed on their web browser?

Metamask is Napster. But they have much more money, and much better lawyers than Napster ever did.

How this ends is obvious. It’s just a question of time.

In Crypto, Go Low or Go High. But Not the Middle 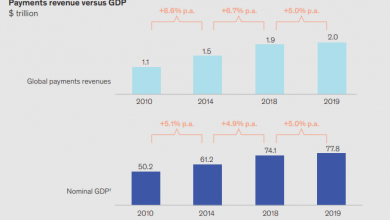 Quitting Your Job is Hard Work

But What If They Don’t Go Bankrupt? 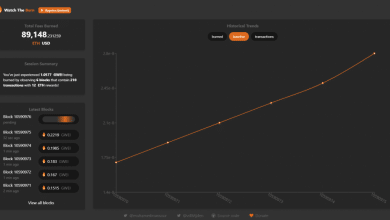