In my six years of crypto-investing, I’ve learned to walk either on one side of the road or the other. But don’t walk down the middle.

For me, there are two types of trades. The first kind of trade has a payoff but most importantly, there is absolutely no way I’m going to lose my initial outlay.

The second kind of trade is one where there is a considerable risk of loss, but the potential return on investment is huge.

And then there is the mushy middle, the trades “guaranteed” to make you 15% to 30% but…there is some chance of losing part or all of your investment.

Let me give you an example of what was for me one of the safest trades in crypto, with no chance of losing your money, for the years 2017-2021. 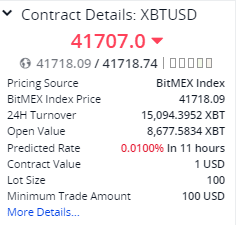 This is the bitcoin perpetual contract for Bitmex, an overseas crypto-exchange hated by US regulators (and so, US residents are banned from trading there).

But often, the payout was much higher. Some years you could park your money and easily make 30-50% a year, with zero chance of losing your initial investment (unless Bitmex went out of business. That’s called counterparty risk. But it never did, and it’s still operating today).

All you had to do was buy some bitcoin and short the contract, and you got those sweet, sweet funding payouts.

Now, at this point, I think, most readers would think “Wait a minute, don’t I lose money if I short bitcoin and the price goes up?”

No. Because we are talking about quanto-futures contracts, contracts that are funded with one currency and payout in another.

To help you understand how a quanto contract works, let me walk you through the trade:

Up, down, the contract will ALWAYS be worth $20K USD but you still collect the funding rate.

That’s one example of an ultra-safe investment in crypto. It looks risky and it’s hard to understand, but if you do your homework and really understand what you are getting into, sleep at night comes easy.

At the other end of the spectrum, we have the super-risky trades where you can double your money in weeks or days but you can lose a big chunk of your initial investment in even less time than that.

The classic example of a hyper-risky crypto trade was the ohm forks craze back in the fourth quarter of 2021.

Smart contracts like Time Wonderland were offering a 4% payout per day, and the tokens were going up as well. 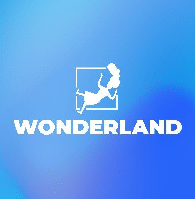 Other clones of Time Wonderland, which itself was a clone of the Olympus project, popped up, and soon there were dozens of these contracts across all the public blockchains offering insane payouts anywhere from 5-15% per day.

Were these projects nothing more than glorified Ponzi schemes? Well, those who cashed out early did great, those who were still holding on to the tokens in January of 2022 got crushed. Lots of investors would say yes.

But if you got in early enough and were smart to cash out your initial investment and continue to play with house money, then it was quite profitable and somewhat amusing, at least for a little while.

After you have spent 4 or 5 years in the kooky land of crypto-investing, you learn to spot the hot trend and when to jump in (and then out).

To summarize, both the ultra-safe trades and the ultra-risky trades have been kind to me over the years.

But the trades that kinda look safe but really aren’t? I avoid them like poison, or cheap tequila (same thing to me).

And that brings me to the latest hot crypto-trend: Smart contracts offering high yields on stablecoins: 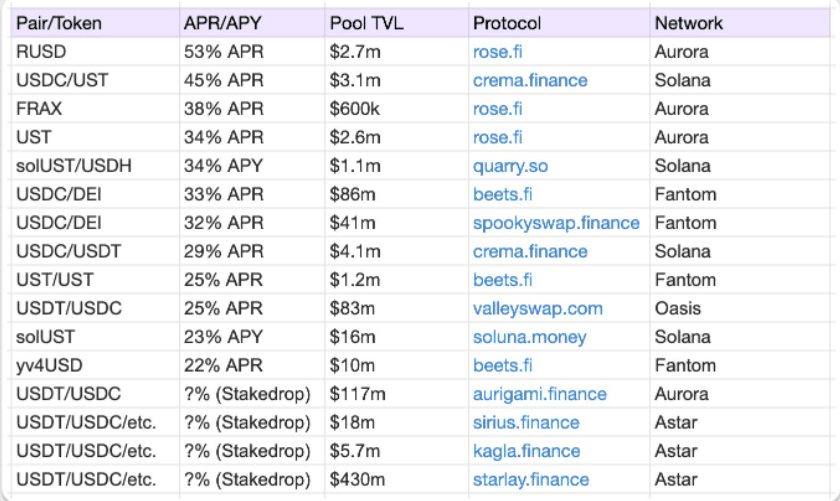 https://twitter.com/stableyields
The chart above show the yields if you “stake” your USD stablecoin in a smart contract on various public blockchain (called networks in this chart).

There are now dozens, if not hundred of Defi contracts offering yield if you stake your USD stablecoins with them.

In theory, the investment is “very safe” correct? You are staking a stablecoin, which should not change in value, (it’s always worth one dollar) and just collecting the fat yield.

What could possibly go wrong?

For example, the smart contract could get hacked:

https://www.coindesk.com/tech/2022/04/17/attacker-drains-182m-from-beanstalk-stablecoin-protocol/
Let’s talk again about counter-party risk. Back in 2018, I thought hedging on Bitmex was the greatest thing since sliced bread. I even put out tutorials on how to hedge on Bitmex.

But to most people, it looked just too risky. Even though Bitmex had been founded in 2014, had never been hacked, and had a reserve fund of hundreds of millions of dollars at the time (now billions), for most people in North America, it just looked too risky to put their money into it.

Except for gamblers, who were attracted to the chance of outsize gains with the ability to leverage their initial stake at 100-1. And those types of “investors” are not interested in hedging.

Okay, now flash-forward to 2022, and smart contracts offering yield on stablecoins are all the rage.

And that’s okay, at least by me. This is crypto, not the municipal bond market (although the bond market this year looks to be every bit as volatile as crypt).

Some contracts offering yield on stablecoins look pretty good to me, and I will be putting some money into one next week.

But some look like a rug-pull waiting to happen, and I think some crypto-investors are going to wake up one morning with their wallets considerably lighter than the night before. Some have already.

How to tell which from which? Well, that’s where you need to do your homework, but I will give you a hint.

A smart contract offering 30% APR on a stablecoin that has attracted less than $5 million in capital just doesn’t smell right to me.

That’s not your grandad’s dividend stock from 1994.

I have two cats in my house. One is a placid house cat that likes to cuddle and the other was raised on a farm and likes to go outside and kill mice.

They may look similar, but I don’t confuse the two.

Same thing with crypto-investments. Not all cats are alike. Some like to cuddle. Others just want to dig their claws into your feet.