Last week the Luna token traded as high as $85 USD. As I write this, it’s trading under 2 cents. The Terra blockchain has been halted. That means you can’t even get your 2 cents out.

The Luna token went from a market cap of $25 billion to nothing, in a space of a week.  But wait, it gets worse.

The TerraUSD token, the algorithmic stablecoin, previously valued at one American dollar, is now trading at 40 cents (trust me, by the time your read this story, that price is going to be different.)

Circulating supply of the TerraUSD? About 11.75 billion.

That was real money. Investors actually shelled out cold hard cash to buy the TerraUSD token so they could stake it for 20% in the Anchor protocol.

So what happened? And why did it happen?

Here is the VERY short version of how the Terra blockchain collapsed:

The Terracoin (symbol UST) was supposed to be backed by the LUNA token. As each UST is sold LUNA tokens are removed from circulation (It’s called a mint-and-burn model).

For example, if the market values LUNA at $10, then for every 10 UST sold, one LUNA is burned or removed from the market.

The Luna Foundation Guard (LFG) was the governing organization responsible for ensuring the LUNA token had backing, by adding reserves of bitcoin, Ethereum, and AVAX tokens to the Terra ecosystem.

Cue the contagion risk. If the LUNA token comes under selling pressure, the reserves have to be dumped on the market.

The LUNA did have some functional use cases, such as staking, governance, and paying for transaction fees on the Terra network but obviously not enough to survive.

How did things go wrong? Let’s find out.

LFG was most likely expecting 3AC and Genesis to be good Terra blockchain citizens and stake their UST on the Anchor protocol. Nope, that didn’t happen.

Last Saturday UST started to depeg from the US dollar as 3AC and Genesis start dumping their UST on Binance the cryptocurrency exchange. Remember, between the two firms, they had $1.5 billion worth of UST to dump.

Very quickly the Binance dump lead to outflow to other exchanges, like the decentralized exchange Curve. Quickly the Curve 4pool liquidity pool for UST was drained.

That was big news. Curve is one of the biggest and most respected decentralized pools for stablecoins in Defi.

After contagion, we had chaos.

Okay, so why did those guys screw the system?

Because crypto-traders are like vampires, but instead of blood, they feed off fear and panic.

In this rough trade, you have traders that would drive a truckload of orphans off a cliff for a one percent spread. I saw 4 to 15 point spreads lasting for up to 15 minutes at a time.

The arbitrage guys made their yearly income in just one day, I’m sure of it. And traders with advance knowledge that 3AC and Genesis were going to blow up the Terra blockchain, made a fortune just shorting the token from $85 all the way down to 2 cents.

What Happens Now to the Market?

That’s a trick question, and it gets complicated. You see, there is no “one” market. There are at least three distinct markets with different types of investors, and fear and panic are spreading from one market to the next.

The first market is the one containing traditional financial assets such as stocks. It’s in turmoil. 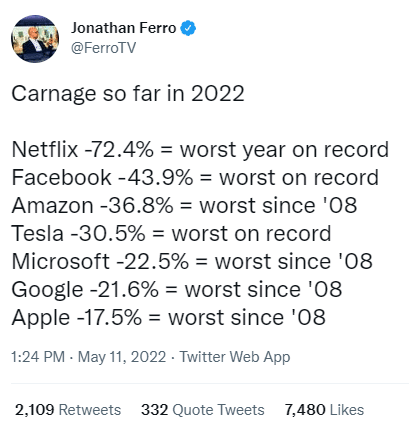 Investors who buy crypto soon learn that while you can double your money, you can lose a big chunk of it very fast.

As a matter of fact, if you stay in crypto for a year, it’s pretty well guaranteed that at least one of your investments will stink to high heaven. But that’s the rules of the game.

BUT…investors who buy Apple, Facebook, and Amazon? Excluding the 2020 blip, they have had ten years of solid returns. And now in a matter of months, a lot of their gains have disappeared.

Those types of investors make me nervous. THOSE guys are the ones who are going to panic (or who have panicked already).

Then you have the crypto market, but even crypto has different sectors.

First, you have the altcoin sectors. With the LUNA/Terracoin fiasco, altcoins have a serious chance of dropping 90% to 95%. Most of them are already down 75% from their all-time high.

Perhaps contagion from altcoins is already finished. Perhaps not.

LUNA is already toast. Dogecoin is at 11 cents. You get the picture.

Those investors have already panicked and headed out the door. Or given up. Or venting on Twitter.

I feel bad for them. I went through what they are going through in the ICO craze of 2017-2018. It’s like one day you are working for Baskin-Robbins as an ice-cream taster, and the next day you start your job as a barn cleaner at a chicken farm.

Then finally you have investors in bitcoin and Ethereum. At present bitcoin is trading around $28K (59% off ATH) and Ethereum is hovering at $1900 (62% off ATH).

Retracements of 40-50% are common with bitcoin and Ethereum (since 2017, it’s happened at least six times, I’ve lost count).

Retracements of more than 60% are however quite rare. It’s only happened twice in the last 4 years with both bitcoin and Ethereum (it happened very quickly in the COVID panic of 2020 but interestingly the historical charts don’t show that).

Veteran bitcoin and Ethereum investors roll their eyes when the price drops by half and think “here we go again.”.

But this time it feels different. Because now we have contagion not just from the usual garbage coins and tokens from the latest craze, but now we have NASDAQ letting the air out of the tires.

The good news? Looks to me like the death spiral came early this year. It will be over soon, one way or the other.