Most crypto enthusiasts would say it was the collapse of the Bretton Woods Agreement in 1971 when Nixon took the US dollar off the gold standard.

But the Bretton Woods collapse was only a symptom. It did not cause the economical turmoil of the seventies, such as the Sterling crisis of 1976 (almost bankrupting all of the United Kingdom). Even the Swiss left the gold standard before America.

The answer is war. Or wars, plural.

Among other things, just paying for a war (without raising taxes) can do serious long-term damage to the economy.

For the US, government expenditures alone on the Vietnam War ran to a total of $141 billion dollars over 14 years.
That doesn’t sound like much. But at the height of the Vietnam War in 1968, the US defense budget was 10% of GDP, as compared to a little over three percent today. 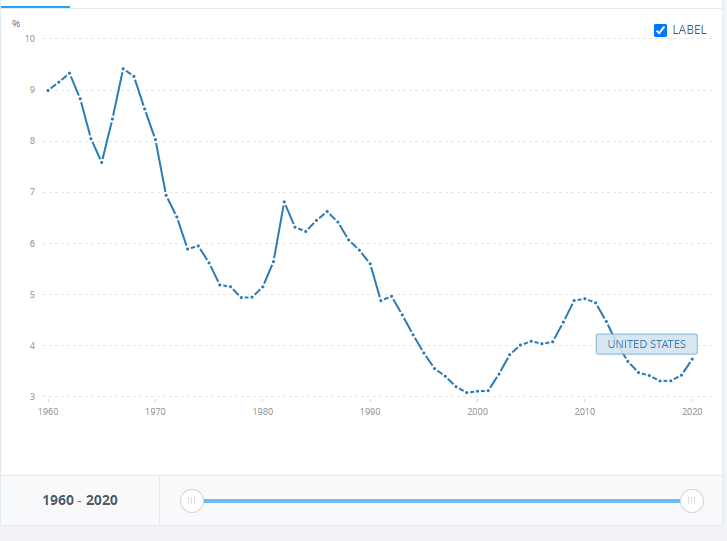 There was also another war that was fought by the US in the 1960s that contributed to the great inflation of the 1970s: The Cold War.

The Apollo space program and the moon landings are a matter of great pride for America. But the whole shebang started with the launch of Sputnik in 1957 and fears by America that she was losing the “space race” with the Soviet Union.

America did win the space race, at a cost of $25 billion. Doesn’t that sound like much? Over a ten-year period that was 2.5% of America’s GDP, or about 25% less than what America is spending on its military at present.

As for the present day, the COVID stimulus in 2022 in the US was 26%, twice the spending of the US military and the Apollo program as compared to GDP back in the sixties. But that’s over one year, not ten, and it has ended.

But there are also two other wars worth mentioning. The Six Day War between Israel and Eqypt in 1968 and the 1972 war between the same two countries.

The two wars radicalized the Middle East, causing revolution and making many Arab oil-producer nations antagonistic towards America and western countries in general.

It of course led to high oil prices. 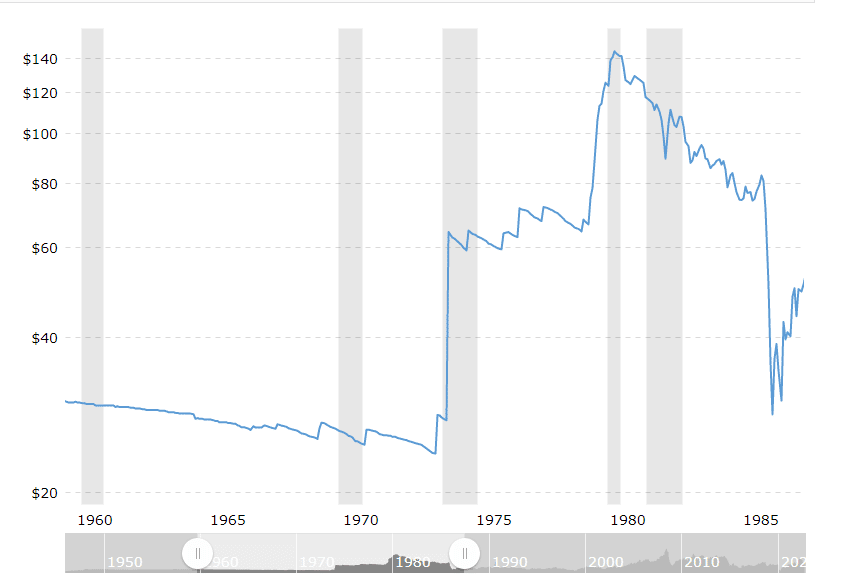 https://www.macrotrends.net/1369/crude-oil-price-history-chart
Adjusting for inflation, oil went from $30 a barrel to $60 a barrel in less than a year.

And what happened in 1978? The Shah fled Iran, kicking off the Iranian Revolution, arguably the last of the pro-Western Arab governments to fall, which ushered in an era of $100+ oil for years (again, adjusting for inflation).

Fiscal policies that cause inflation and wreak economic havoc don’t appear because Federal Reserve officials decided to wake up one day and do stupid things.

There Are Similarities to Today but Also Big Differences

It’s remarkable how the financial press is ignoring the war and its impact on the world financial markets, especially on the inflation rate.

There’s an argument that because oil prices are below $100, especially in North America, the Ukrainian war is having a minimal impact.

I think that’s completely wrong. Energy prices in Europe are an order of magnitude higher than they were a year ago, and that impact everything, including exports to America.

Come to think of it, Asia isn’t doing so great, either.

The second-order impact of the Ukrainian war on inflation is not being captured by first-order statistics.

Let me put it another way. If Russia hadn’t invaded Ukraine last February do you think that European governments would be asking their citizens to not take any long hot showers?
How Will it End?

The good news is that one way or another, the Ukrainian war will end by the first quarter of 2023. How we do know this?

Because the Russians are in such a desperate state that they want to use nukes, same as when the American generals wanted to nuke North Vietnam in 1968.
Remember, the distance between Kyiv and Moscow is less than 900 km. Threatening to drop a nuke less than a thousand clicks away from your capital city (nuclear fallout, anyone?) is close to insanity,  stupidity, or a combination of both. But most likely it’s an act of desperation.

Admittingly, we can’t rule out the possibility that Putin has truly lost his marbles, which is why everybody is understandably nervous.

That depends a lot on the state of Russia after Ukraine kicks every last Russian solder off their territory.

Will Russia graciously admit defeat and turn the natural gas taps back on for Europe? Or will it collapse into complete anarchy?

Remember, Ukraine isn’t the only country in Central Asia that has an intense dislike for all things Russian.

You’ve got Georgia, Moldavia, Chechnya, and a whole bunch of other countries ending in -stans that most Western citizens couldn’t find on a map, that have huge grievances with Russia.

Russa leaving Central Asia does not guarantee a world bursting with rainbows and happy unicorns.

What impact will the end of the Ukrainian war have on energy prices, and the world economy, in 2023?

It’s worth repeating: Nobody knows, yet.

But it’s not guaranteed to be all bad news.

Take, for example, Iran. There are protests against the mullahs (again). Nobody is talking about an overthrow of the government, yet. But nobody thought that was a possibility back in 1978.

If Iran were to have a government that was more interested in selling oil to Western countries than in calling America names like the “Great Satan” (not to mention trying to build nukes), that would have a serious impact on world energy supplies in a hurry.

Likewise, if Putin was deposed, to be replaced by a leader not obsessed with invading and enslaving all countries that were formerly part of the Soviet Union, that would cheer up a lot of people in a hurry (okay, I’m not holding my breath on that).

One thing that is certain.

It’s not just all about Jerome Powell and US interest rates. Not even close.