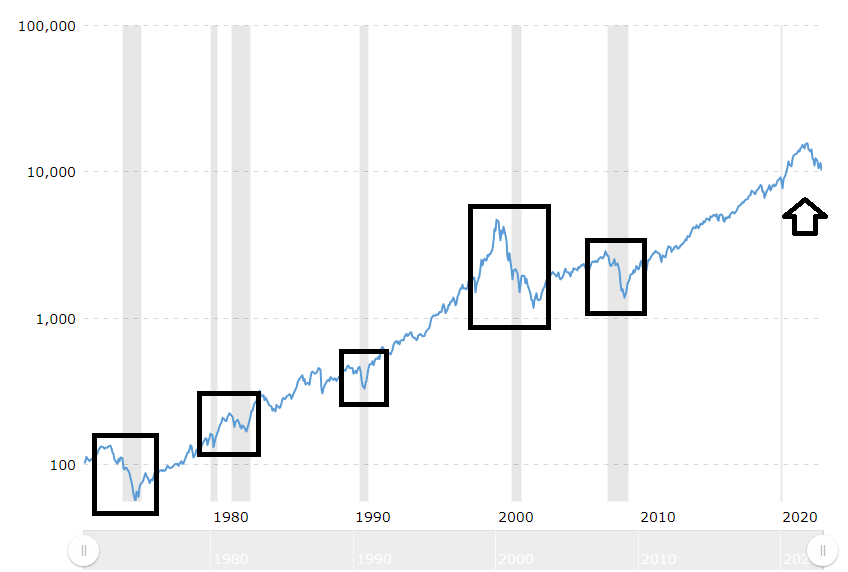 This is a chart of Nasdaq that goes back fifty years, to 1972. I have highlighted five historical corrections of 10% or more.

First, the bad news. They all lasted longer than one year, from peak to trough with one exception.

Based on the data above, a pessimist would argue that this bear market could easily last for one more year. But I’m not a pessimist.

I think there’s a very good chance the bear market will be over in six to eight months, or even less (yes, I do think the first quarter is a lost cause).

First, everybody says the market is down because the Fed is raising rates and fighting inflation. And that’s true.

That’s what led to the 1981-1982 recession and bear market, when Fed Reserve Chairman Paul Volcker jacked rates to 20%.

But that bear only lasted one year and two months, with a decline of 23%. You could conclude that’s good news for us, considering where we are currently in the cycle.

If we are doing a redux of 2007, then we are looking at late summer of 2023 for the trough of this bear market. I can live with that.

If you were a paid subscriber of my research service back in December of 2021, you would know that I sold a whack load of Ethereum in the last month of that year, paid a whopping amount of tax, and built a concrete bunker in my backyard (Just kidding on the last point).

One year later, there is less cash in my chequing account, but enough to make it through to the summer. I can wait.

However, we still have two nasty bear markets to explain away, the one in 1972-73 and the one from 2000-2002. The first lasted almost two years, and the second lasted more than two and a half.

We need to ask ourselves, why did those bear markets last so long? And I think the key to understanding what happened way back when is to look at geopolitical events.

What makes markets go up and down is more than earnings and balance sheets. History has something to say about bear markets (and bull markets as well).

I touched briefly on geopolitical events in the 1970s in my previous post “It’s the War, Stupid.” 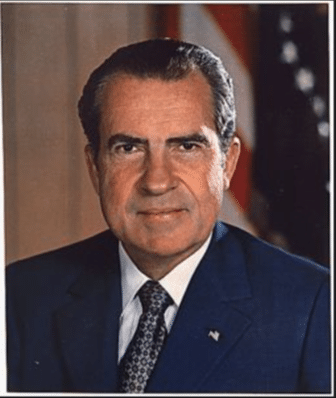 Note that the bear market ended one month after Nixon resigned, and the Nasdaq rose steadily with the occasional 10% pullback for the next seven years, until 1981.

It’s funny that 9/11 seems to be disappearing from the collective memory of society, but it was a big, big deal at the time.

It’s hard to explain to somebody, from another generation, just how happy and carefree the 1990s decade was to those who lived it.

There was no cold war.

The Internet revolution was just starting.

The economy was booming after the short and sharp recession of 1990.

Then the double whammy hit. The contested 2000 elections split America into a sharp division of left and right, a division that lasts to this day.

Then the Twin Towers fell, and the “end of history” proved to be a cruel lie.

You can’t prove that 9/11 extended the bear market by almost one year. But it’s hard to put forward the argument that the political turmoil of that year had zero effect on the Nasdaq.

If geopolitical turmoil can extend a bear market then it stands to reason that good news can end it.

And in the last few years, we have had a lot of bad news. Is this the year we turn the corner?

The experts think the war in Ukraine has hit a stalemate and they will be fighting for years. But the experts have been consistently wrong about Ukraine.

If the war ends in the spring or summer, that’s good news.

China is getting hammered by COVID now that they have stopped the lockdowns.

At a terrible human cost, it could be by the spring that COVID is finally behind us. That would be good news.

Of course, we could get bad news that keeps the bear growling. My Twitter feed throws up doomsday scenarios every day.

And, to repeat myself, the first quarter just doesn’t look good.

But my timing to re-enter the market doesn’t have to be perfect.

The shortest interval between bear markets was in the 2000s, from September 2002 to October 2007, a period of five years and one month. In the seventies, the rally lasted longer than seven years.

In the eighties, excluding the weird market crash of 1987, it was one month short of eight years.

Cross my fingers and sit on my hands for one or two more quarters, and then enjoy at least a half-decade of a rising tide. That’s what history tells me I should do.