Home  »  Analysis   »   Would You Believe Goldman Sachs Is My Latest Pick?

Today I added to my position in Goldman Sachs (GS-NYSE) buying an additional 20 shares to bring my average cost to $230.53. I have just under $9K CDN worth of shares.

But wait, I hear you saying, Goldman Sachs doesn’t do Bitcoin.

It has not been a good year for Goldman Sachs, for in July it disclosed that in the second quarter of this year, it’s fixed-income revenues declined by 40%, according to an article just published by the Economist.

The Economist goes on to note that all big banks suffered but Goldman’s “was the worst of the bunch” and that Harvey Schwartz, president and co-chief operating officer, is on record saying he wants to “reignite growth.” 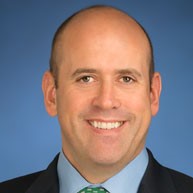 Meanwhile in the cryptocurrency world, Bitcoin and Ethereum have had an amazing year.

Personally, I am betting (with my own money) that Goldman Sachs in will 2018 1) Get into crypto and 2) It will boost the share price.

Here is my carefully assembled analysis, complete with a ton of hypothetical conclusion and a generous helping of hands-waving-in-the-air.

Let’s pretend we are Mr. Schwartz and look at cryptocurrency and ask ourselves: Can we make money in crypto-land (yes) and more importantly, can we make ENOUGH money to impact the bottom line?

But before we go any further, we need to get a sense of how much money Goldman Sachs needs to make to move the needle, so to speak: 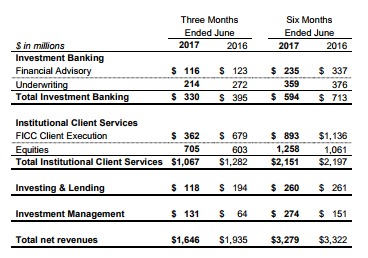 The chart is from Goldman Sachs quarterly report ending June 30, 2017.

As you can see, in the last six months, GS made $274 million in investment management (second-last bottom row).

What is investment management?

It’s when you make fees off managing other people’s money. A common fee structure is 2% and 20% for hedge funds (and most assuredly investments banks).

Assume you have given $100 million to Goldman Sachs and they have invested the money so that it returned 20% in one year.

Now supposedly Goldman had invested the client’s money in Ethereum just as it was taking off in May when it started off the month at $76.92 US.

So with the market cap of Bitcoin and Ethereum sitting at $65 and $27 billion dollars respectively, you are looking at an asset class worth in total $100 billion.

If we assume that Goldman could “manage” 2% of that asset class for its customers it would generate $40 million in fees plus 20% of any increase in the price of Bitcoin and Ethereum.

The total would be $240 million. The entire investment management sector of Goldman Sachs generated $274 million in revenue in six months.

On the other hand, if Goldman wants to launch a Bitcoin/Ethereum ETF, then the managment fees go way down, as low as 0.25% That’s means for every billion dollars invested by Goldman on behalf othe customers, they would only collect $2.5 million.

I think it’s safe to assume that the guys in investment management are looking pretty hard at Bitcoin and Ethereum. But it all depends on the fee structure they can convince their customers to pay.

The investment banking sector generated $594 million in the last six months for Goldman Sachs. This is the sector that deals with initial public offerings or IPOs.

The fees for IPOs can be anywhere from 3% to 7%. For example, in 2015, Goldman took a fee of 3.25% of the Twitter IPO and earned itself $23 million. But seven percent is the standard charge.

The cryptocurrency equivalent to IPO is of course initial coin offerings. ICOs so far have reached the $2 billion in 2017. Let’s extrapolate and say ICOs at year-end of 2017 would reach $3 billion.

Even if we assigned a management fee of an outrageous 10%, that would still only generate $300 million for the entire sector. Assuming Goldman could capture 10% of that market, that’s $30 million.

Thirty million dollars for the investment banking division of Goldman Sachs is nice but not earth-shattering (remember this division makes just less than $100 million a month).

Assume those guys are looking at ICOs as a more a curiosity than anything else.

But if 2018 turned out to be a blow-out year with ICOs hitting $10 billion or more, their attitude could change in a hurry.

What is this? According to Investopedia, Goldman Sachs institutional clients services are defined as such:

“Goldman Sachs takes large positions in certain stocks (and options, and futures, and other derivatives), which it can then sell, thus guaranteeing or at least facilitating a market in said securities.”

We assume this means trading in sophisticated financial instruments such as futures, option, and derivatives.

This is where it gets interesting: The institutional clients services sector is the biggest operating division of Goldman Sachs, having revenue of more than $2.1 billion in the first six months of 2017.

It’s also the most troubled sector with revenue dropping by more than $200 million in the last quarter.

The FICC sub-division by far caused the most grief with revenues dropping 40%. FICC refers to fixed income, currency, and commodities (everything except equities).

The FICC divisions of most investment banks are suffering over the last few years as spreads narrow in commodities and interest rates stay low in bonds.

Which bring us to Bitcoin and other cryptocurrencies.

It’s not unreasonable to forecast that next year the trading volume for cryptocurrency derivatives will reach half-a-trillion dollars.

It’s literally a billion-dollar question. If Goldman Sachs could trade cryptocurrency derivatives, how much money could it make?

The answer is most probably, enough to move the needle. By quite a bit.

So Why is Goldman Sachs Not Already Moving into Cryptocurrency?

Goldman Sachs is regulated by an alphabet soup of regulators including (hold your breath): “Board of Governors of the Federal Reserve System (Federal Reserve Board), the FDIC and the New York State Department of Financial Services…. …. The London Branch is authorised by the Prudential Regulation Authority and is subject to regulation by the Financial Conduct Authority and limited regulation by the Prudential Regulation Authority” From Goldman Sachs disclosure web page.

None of those regulators have approved any financial institution handling any cryptocurrency or treating it as money. For a large organization such Goldman’s, that’s kind of a big deal.

Right now, Goldman  Sachs is not indicating what it’s going to do about cryptocurrency giving no advice to it’s institutional clients about whether to invest in cryptocurrency or not.

But behind the scenes you just have to think a bevy of associates and partners are clamouring to get a piece of the cryptocurrency pie.

With revenues falling at its biggest sector and if cryptocurrency continues to grow, the pressure will continue to mount for Goldman Sachs to come up with a strategy… and the regulators will also feel the heat to unshackle Goldman and the other investments banks.

I look upon my purchase of Goldman Sachs as free call on crypto-currency. If scenario #1 unfolds in 2018, I make money.

If #2 or #3 happens, well then, Goldman Sachs is currently trading at a price to earning of just over 12. How much farther will it drop?

Disclosure: As stated in the article, I own shares of Goldman Sachs