There has been a lot hype about Bitcoin arbitrage. You buy cheap Bitcoin on one crypto exchange and then sell it on another exchange where the price is higher.

For example last Tuesday Bitcoin was priced at $17,178 US on Bitfinex but was  only $16,328 on Poloniex. If you had bought Bitcoin on Poloneix and then sold on Bitfinex you would make a profit (before trading fees) of $850 or close to 5% gain.

Do that ten times over and you have made 50%.

By Friday the gap closed to $100 but it took days for the spread to narrow.

Regular retail investors (that’s you and me) can’t take advantage of the spread that often occurs in the price of Bitcoin between different crypto-currency exchanges.

To do arbitrage with Bitcoin and the US dollar, you need to be able to cycle Bitcoin AND US dollars quickly between the exchanges. The money “flow” would go like this:

If you are lucky, that will only take three days, which is too long. The market could easily move against you in that time, wiping out your 5%.

One solution to that problem is to use Tether, a digital coin created by Bitfinex that is pegged to the US dollar. In theory, each Tether is backed by one US dollar held in reserve (I say “in theory” because there is huge speculation in the media that there are fewer US dollars held in reserve than Tether coins issued).

Nevertheless, Tether is heavily used for crypto arbitrage. How do I know? Well, even though the nominal value is $1 USD, it’s currently trading at $1.08. That’s right it’s trading higher than its nominal value because it’s so useful in crypto-arbitrage.

However, there are still problems doing crypto-arbitrage using Bitcoin and Tether.

With Bitcoin, if you want to transfer Bitcoin from one exchange to another in less than an hour, you must now pay some hefty transfer fees. Miners are asking as much as $100 (and higher) to transfer Bitcoin and are still taking up to two hours per transfer. Even in a few hours the market can move against you.

The Solution: Don’t Use Bitcoin for Crypto-Arbitrage, use DASH

Instead of using a currency pairing of Bitcoin/US dollars, use an altcoin of DASH/Something else. 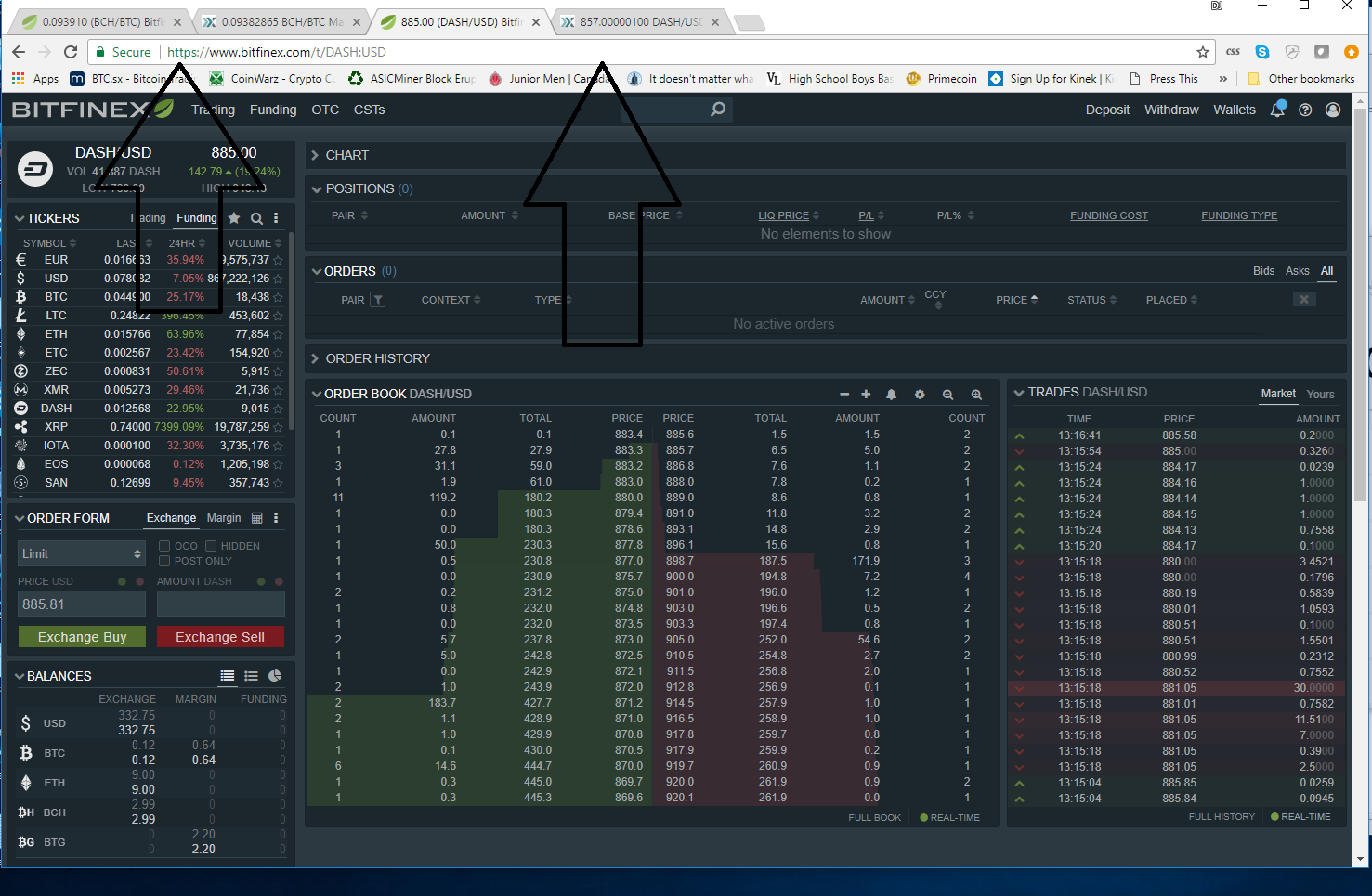 This is a screengrab of the Bitfinex trading platform. I have four screens open, two of Bitfinex and two of Poloniex. The next picture is a closer view of the tabs.

Let me explain what you are seeing.

The symbol BCH stands for Bitcoin Cash. Last Tuesday it traded at 0.093910 Bitcoin Cash for every one Bitcoin on the Bitfinex exchangs and at 0.09382865 on the Poloneix exchange, a difference of less than 1 percent. That is the your neutral currency pair.

Meanwhile DASH was trading for $885 on Bitfinex and $857 on Poloneix, a difference of 3.2%. This is the currency pair you make money on.

After trading fees, you should be able to clear 1% on your trade which doesn’t sound like much except you need to take in account trade velocity.

Trade velocity is how many trades can you do in one hour or one day. Let’s say you have a float of $10,000. With trading fees cutting your 2% spread down to 1%, you make $100 with every cycle. Each cycle takes one transfer of DASH to one exchange and one transfer of Bitcoin Cash to the other exchange.

You make 5% over the course of one day.

Two hours is more than enough for the price to move against you. I picked Bitcoin Cash as it has a fair amount of volume and it has a listing on many exchanges. However it’s not the best currency to trade (but better than Bitcoin).

A much greater risk is the holds that various crypto-exchanges will place on depositing and withholding funds. At present withdrawals from Bitfinex have been backlogged for days because of heavy volume.

So How Do I Make Money?

It’s not easy but you don’t need to be a genius either. You need to willing to spend more than a few hours manually grinding through lists of cryptocurrency pairing and finding crypto-exchanges with 1) Low trading fees 2) Quick deposit and withdrawal times and 3)Favourable currency pairings.

You can look for crypto-exchanges here.

If you are a nerd with not a huge amount of money (like $10K or less) crypto-arbitrage can very profitable. The lesser-know exchanges do not have a lot of liquidity so $500 trades can be a large order for them. BUT the spreads can be huge, easily 10% between different exchanges.

You can easily spend many hours exploring an exchange and learning the back story of the coins that they list.

If I wasn’t writing this newsletter and trading stocks, I would be doing crypto-arbitrage full-time.