Last week (while I was on vacation) Tom Yee published a widely-distributed story stating “Bitcoin currently trades essentially at the break-even cost of mining a bitcoin,”

I couldn’t find the methodology behind the report, so I thought I would try to duplicate the results.

As I have noted many times before, it’s not hard to figure if Bitcoin mining is profitable or not, there are many Bitcoin mining calculators online. Here is one: 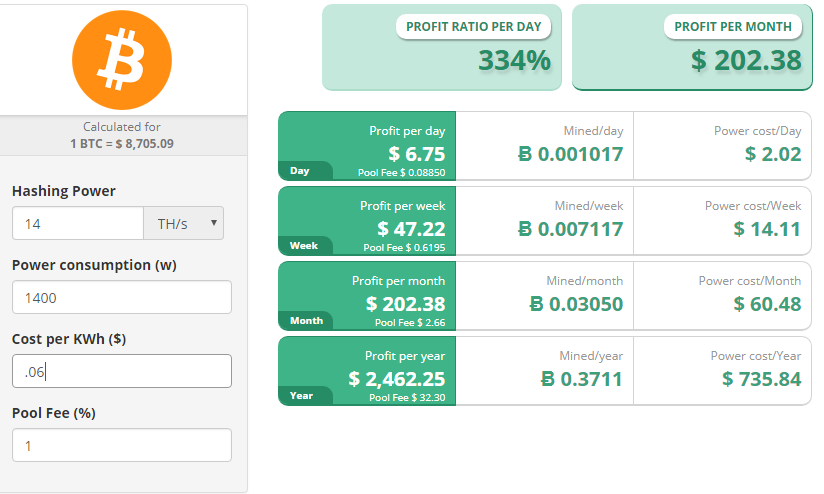 (The vast majority of Bitcoin miners have switched over to the Antminer S9, which consumes about 1400 watts to output 14 Terahash)

The article does state: “Fundstrat’s model incorporates three factors: the cost of equipment, electricity and other overhead such as maintaining cooling facilities.”

However, I know from interviews with bitcoin mining executives that HVAC i.e. cooling only adds 25% in amount of electricity needed.

That drops the net profit down to $2278 which doesn’t seem like a big deal.

A cause for concern could be bitcoin’s ever-increasing mining difficulty. A higher hashrate i.e. computing power means the bitcoin distributed on a daily basis is split between an ever-greater number of miners.

On the other hand, you look back at the history of the relationship between the hashrate and the price of bitcoin, over a period of time, they synchronise. Since the beginning of March (see the box), the hashrate has not gone up.

While the numbers have deteriorated over the last three months, there is still lots of money to be made in bitcoin mining. Unless you happen to be a public company in the bitcoin mining business.

If Some Companies Don’t Deliver in the Next Few Months, There’s Going to Be Trouble

The real issue is that the numbers look good on paper. But in practice, most of the bitcoin miners that went public in late 2017/early 2018 didn’t have the mining rigs in place to start mining right away.

Instead, these companies went public to raise funds to order mining rigs and build data centres so they could start mining at some point in the future. Well the future is now.

By end of spring or mid-summer at latest, most if not all the rigs ordered from Bitmain (maker of the Antminer s9) should have been delivered to these companies. But the Antminer S9 is not plug-and-play.

For example, it doesn’t come with a power supply, you have to provide it yourself. You also have to build the cooling system and provide the network inside the data centre to get it online and “mining.” It’s industrial-level engineering.

All these companies provided wonderful powerpoint slides at the beginning of the year saying that by first quarter/second quarter 2018, their multi-megawatt facility would be up and running and earning lots of bitcoin.

When bitcoin was close to $20,000 the margin of error was huge and any slip in schedule didn’t look to be too serious.

But now the first quarter 2018 is almost over and the margin of error has become MUCH smaller. Investors have turned away from public crypto companies with a vengeance, selling them down several percent every day for the last eight weeks.

And for a lot of these newly-listed companies, this decline is warranted—because they just won’t be able to deliver on their promises (which, by the way, I warned you all about months ago.  Nobody was going to have all their Antminers installed and producing revenue in the time frame they thought.)

Some companies are firing up the Antminers with days of receiving them. But there also rumours of some companies keeping their mining rigs in storage for weeks because they can’t figure out how to make them work.

The next couple of months will tell which management can deliver on their promises (or not).

Editor’s note: Next story I will write about two public bitcoin miners.  One has market cap nearly 50% larger than the other. But the smaller one – in a few months – will have four times the mining capacity of the larger company. I will tell you why I am long on the smaller company and short on the bigger one. Stay tuned.