Home  »  Analysis   »   If One Day You Are Ever Sitting on a Big Pile of Bitcoin, These Strategies May Come in Handy

Let’s pretend you are the portfolio manager of a bitcoin hedge fund and your job is to make 50% return a year. Or I should say, your commission is 20% of whatever you make for the client.

That means if you don’t make money for the client, you don’t get paid. So you are motivated.

You can lean back with hands behind head and park the bitcoin in a safe wallet and cross your fingers that bitcoin has another fantastic year like 2017.

Or you can do some work to earn your commission.

What I will show is a bit complicated but bear with me, if one day you are ever sitting on a lot of bitcoin, these strategies might come in handy.

This is a screen snap from Bitmex, the largest bitcoin future exchange in the world, on April 25th:

Let me explain what those symbols mean.

The XBTM18 contract is the June contract, expires in two months (June 29th).

The XBU18 contract is the September contract, expires in five months (September 29th).

Remarkably, the price for all contracts is roughly the same between $9121 and $9192. There is no premium assigned to any of the futures contract.

That is to say, you can buy, up to 100x leverage, bitcoin futures contract that don’t expire until the end of September, for free.

What could possibly go wrong?

Aha, you think. If bitcoin goes down in price, you lose. And that’s true. Therefore, we need to do something to make our position a little less risky. We need to hedge.

Now we need to surf over to Deribit, another futures market that allows you to place calls and puts on bitcoin.

This next screen looks really complicated but let me explain. This is what Deribit is offering for call options: 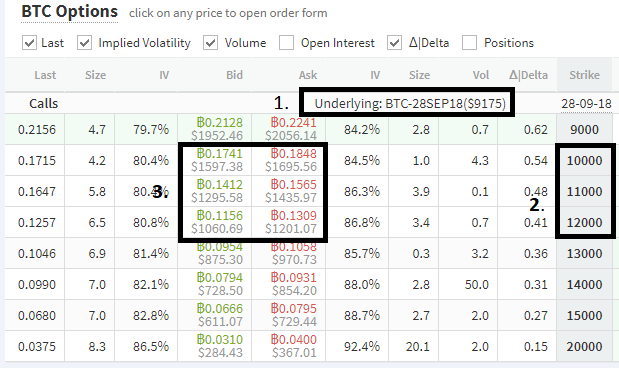 Now what you can do on Deribit is short-sell the calls. This means for every one bitcoin you allow to be locked up as margin, you can sell one ‘call’ contract. Depending on the strike price, you will receive either 0.1741 or 0.1156 bitcoin which will be released to you on September 28th, 2018.

If the price of bitcoin stays below the strike price, you make money.

Easy and simple, no? Okay, let’s do a hypothetical trade and see how we can make some money.

An Example Where It’s Very Hard to Lose Money

I have two bitcoins committed to contracts.

So what happens at the end of September when the contracts expires?

A good strategy to employ after a serious dip in the price of bitcoin. Like now.