Bitcoin charts can drive you insane.  They can be so volatile, (and oh, does the press ever like to remind you of that).

But there is one quietly bullish chart nobody is telling you: 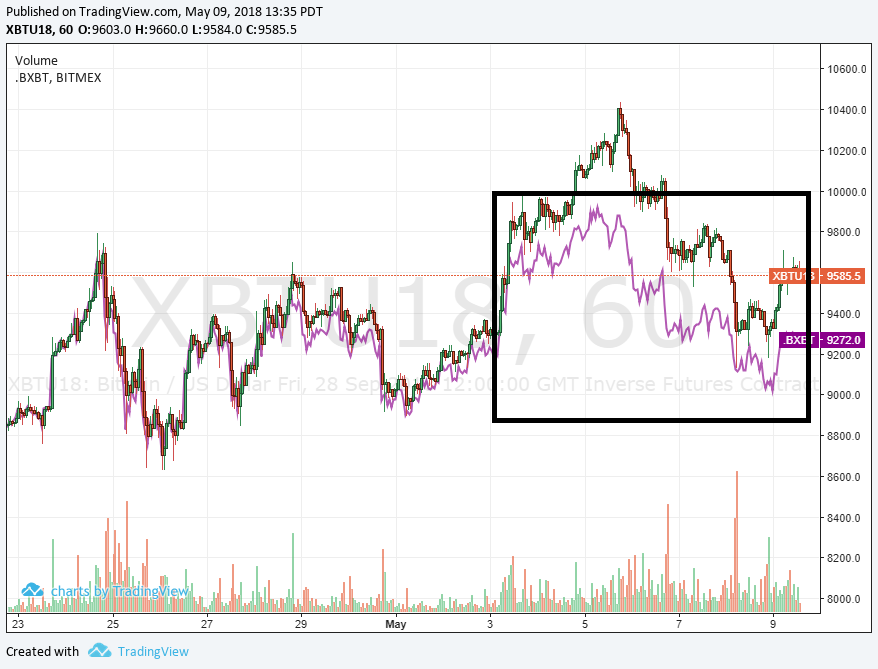 This is a chart of the Bitcoin futures contract XBTU18 on Bitmex, the largest bitcoin exchange in the world. The XBTU18 expires on September 30, 2018, or slightly less than six month from now.

The price of the XBTU18 is show by the red and green bars. The current market price of bitcoin is the purple line.

Now you see a gap between the two lines, which means the XBTU18 is now priced higher than the current price. That’s bullish.

There has been a nice rally in cryptocurrency over the last 30 days. Bitcoin has gone from under $7000 to hold steady over $9000 the last week.

Ethereum has done even better, have been under $400 at the beginning of April and is now more than $750.

But for many investors, it’s still wait-and-see. Especially for investors who bought stocks on the TSX Venture with exposure to crypto. Look at this chart: 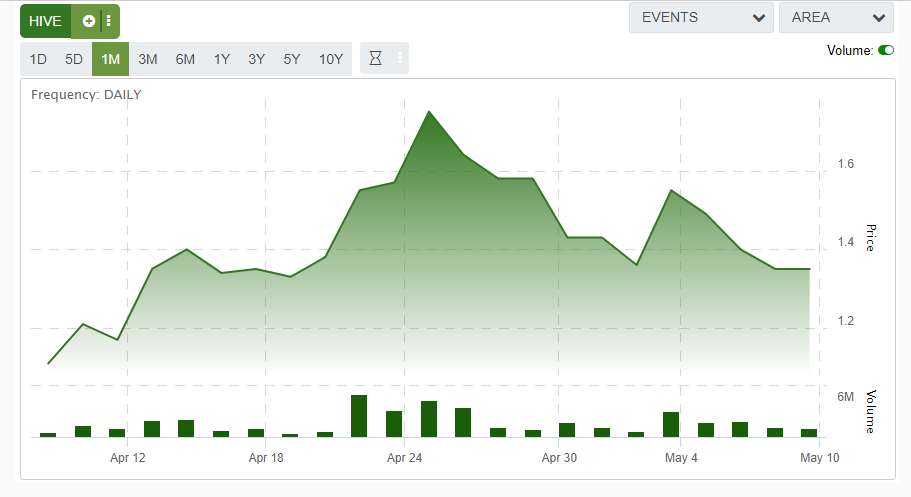 That’s the chart of HIVE Blockchain (TSXv-HIVE), the biggest crypto-company on the TSXv by market capitalization. It mines Ethereum (which is up 80% in the last 30 days).

If HIVE mined gold (the real stuff) and gold went up 80% in one month, I think it would have a better-looking chart.

And the smaller crypto-companies continue to get hammered. This is the chart of DMG Blockchain (TSXv-DMGI), a bitcoin miner. 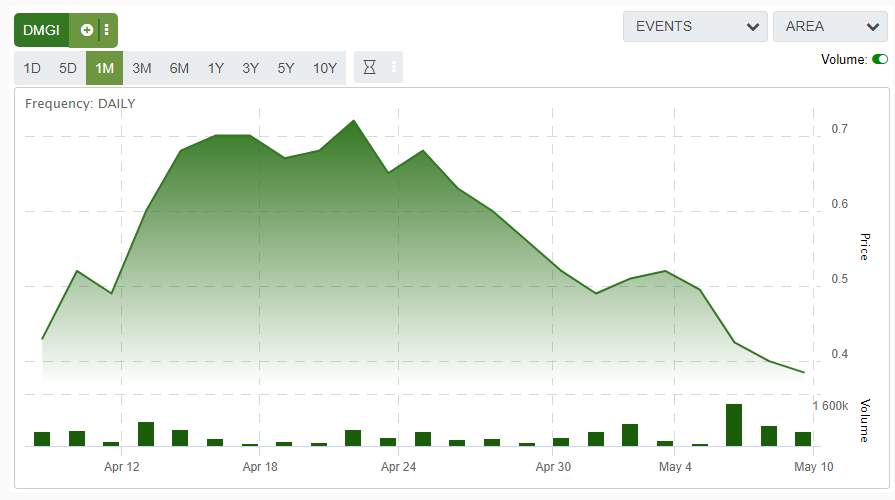 Even though the price of bitcoin has gone UP in the last 30 days, the share of DMG has gone DOWN.

This is very interesting because as a miner, DMG has leverage to the price of bitcoin in a non-linear fashion as its costs (like electricity) are fixed.

This makes for some interesting forecasts about the future.

DMG is constructing at 44-megawatt bitcoin mining facility that is due to come online by mid-summer or latest by September 2018.

Without showing a whole page of calculations, here is a spreadsheet I made of how much bitcoin they can be expected to mine on annual basis.

Keep in mind the market cap of DMG is currently under $50 million. If bitcoin stays close to $10k for the summer, the DMG’s mining facility will generate almost double it’s market cap, on an annual basis.

Of course, the big question is what will be the Bitcoin mining difficulty come September?

(For those who aren’t familiar with that topic, mining difficulty is set by the number of miners competing for bitcoins. The more miners are competing, the less profitable it is to mine bitcoin.)

Critics note that bitcoin mining difficulty has doubled since January (and therefore profits have been cut in half).

If the trend continues, then DMG’s mining plant will only throw off $39 million CAD on an annual basis (still a very nice number) but will decline thereafter.

But that assumes that mining difficulty increases even when the price of bitcoin does not.

And historically speaking, that’s not correct. If you examine the bitcoin network hashrate over a period of years, not months, you will find that mining difficulty does not increase during periods of bitcoin price stability.

In any case, one of four things will happen over the summer of 2018:

Scenario #3 is the one that should cause investors the most worry as yes, bitcoin and Ethereum can go down in price, they have done it many times before.

Scenario #2 has never happened for longer than a two-month period.

Of course, there are tens of thousands of Antminer S9s mining rigs still on order and waiting to be installed in North America.

But for the hashrate to increase significantly, you need to see hundreds of thousands of mining rigs added to the bitcoin network.  I don’t know where that added capacity will come from.

Yes, mining difficulty went up in early 2018 even as the price of bitcoin was crashing. But for the last 30 days, the network hashrate has stayed essentially the same at 30 million Terahash (source: Blockchain.info).

I believe scenario one or four will happen over the next few months which is why I have been ignoring the charts and not selling.

P.S. I own both HIVE and DMG. Nothing in my article(s) should be construed as investment advice.