I have a friend who is worth quite a bit of money who, if certain conditions are met, will go out and buy lottery tickets on principle.

Every once a while the lotto jackpot is larger than the amount of tickets that are being floated that week.

Even though he literally has a 10 million-to-one chance that he is going to lose his money, he buys the ticket anyways. Because the odds are in his favour.

You must have that attitude with altcoins.

Like I mentioned in my last article, the people who bought Gamecredits last May for a little over 3 cents each, made a return of 3300%, and would have made a return of more than 19000% if they had sold at the peak.

My lottery ticket is the Flip (FLP) token.

By the time the IPO finished in January of 2018, each token was being sold for more than $5.00. You could only pay for Flip tokens in Ethereum and the price of Ethereum had skyrocketed to more than $1000 in early January.

Still I had made paper profits of almost 800%. There was just one problem.

There was no marketplace where I could sell the token. And that’s one of the problems with these lottery tickets: lack of liquidity.

But before I tell you how I will (hopefully) get my money back (and then some), I want to tell you a little bit about what the FLIP token is supposed to do. 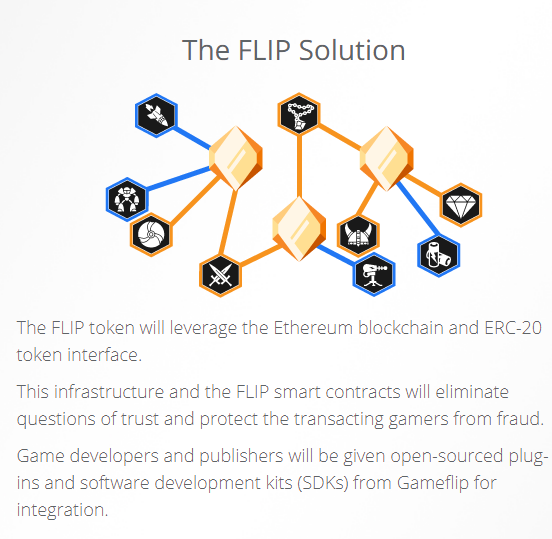 If you don’t feel like reading the fine print, the Flip token is meant to be used for in-game currency.

If you are under the age of thirty, I need to explain no further. However, if you are old as me, I need to add more detail:

Nowadays, many if not most games published on mobile and on the desktop allow you to buy virtual items in the game for real money.

The buying and selling of these virtual items, such as magic swords and special outfits, for your character, is big business

Fortress Battle Royale, the most popular game of 2018, is free-to-play. But it is estimated that the publisher made $300 million USD in the month of April alone, from in-game purchases.

The FLIP development team estimates that gamers purchase over $100 billion USD of virtual items each year.

They don’t show attribution for that number but Gameflip, the company that is sponsoring the FLIP token, is showing a healthy marketplace for in-game items.

It’s a private company based in San Jose, California, that claims to have a community base of 3.4 million games based in 175 countries with $4.5 million in listings.

It was founded in December 2014.  Their CEO is JT Nguyen whose linkedin profile is here. Mr. Nguyen was previously COO of Aeria Games which he helped to scale to 50 million gamers worldwide and to 400 employees.

Terry Ngo is the other co-founder, and his linkedin profile is here.

Both founders are graduates from Stanford University and have deep ties to Silicon Valley.

The private equity groups that are backing Gameflip are all from Silicon Valley: Bullpen Capital, GoAhead Ventures, Lightbank and PlayNext.

The team, and the finance guys backing the team, are all blue-chip. Most importantly, they won’t be happy with anything less than a company with a billion-dollar valuation.

When Are You Expecting to Get Your Money Back?

“After months of coding, testing, writing and polishing our product, we, at Gameflip, are proud to announce that the FLP integration with Gameflip’s backend is ready for its launch! It’s been months of learning and hard work for all of us and here we are, in June 2018, ready to rock and roll!”

The Gameflip team has been building a wallet that will be integrated into the Gameflip marketplace and should go live this month.

Other features on the roadmap for the summer include:

If you don’t understand techspeak, SDK and API are just programming building blocks for different programs to connect and understand each other.

To take an example, if the publishers of the game “Fortnite Battle Royale” wanted to use FLIP as it’s in-game currency, they would need an API from Gameflip and use a SDK to connect their Fornite game to the Gameflip marketplace.

To answer the question of “when I will get my money,” I think it will be near the end of 2018, especially if Gameflip can secure contracts with any big gaming publishers to use the FLIP currency in their games.

I am guessing price of FLIP will be extremely volatile this summer as the “marketplace” tries to figure out what a FLIP token will be worth. There may be a dump of FLIP tokens (bad for the price) or people may try to hoard them (good for the price).

Nobody knows. Remember these are not shares in a public company, it’s a currency designed for use in videogames.

I don’t think the FLIP token will go to zero. It may go to as little as five cents. But it could blow up and easily trade for five or ten dollars.

That’s why I call it my lottery ticket.