There are SOME people who think bitcoin will nearly double in price over the next three months and are willing to bet on it.

They are putting up cold hard cash and will lose of all unless the price of bitcoin does something very dramatic over the summer.

Let me show how I know this.

This is a screen snapshot of the bid-and-ask for bitcoin options on the Deribit exchange on June 26th. 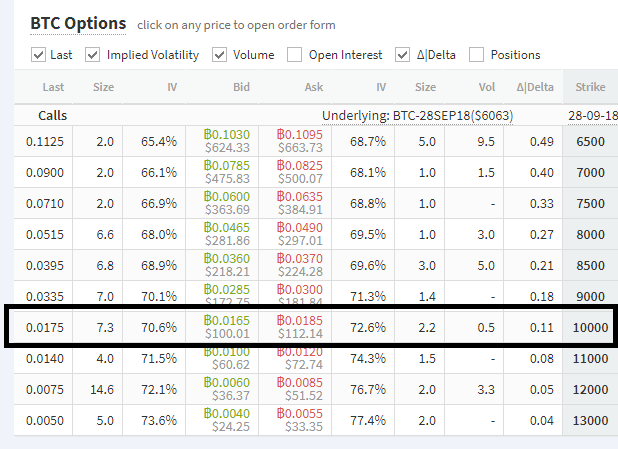 That means if you pay 0.0185 bitcoin right now, you have the option of buying one bitcoin at $10K USD right up to the last Friday in September.

Good luck with that.  Right now. bitcoin is trading close to $6K. It has to go up more than 67% for this to be a winning trade.

As for me, I not buying calls on bitcoin, I’m selling them short. I’m the guy on the other side of the table.

I have been selling short bitcoin contracts for the last six weeks on Deribit and it’s been quite profitable, especially since you are able to sell short on margin.

The calculations of how much margin you need to put up are  calculated on-the-fly by the Deribit trading engine and takes into account a number of variables, such as time of the contract as the risk factor.  But the margin is usually greater than 5 to one.

That means if I want to sell short contracts with a value of five bitcoins, I only have to put up one bitcoin.

In the go-go crazy world of crypto, a 30% annual return doesn’t sound like much. But really how much risk am I taking on?

It’s actually less than you think.

But that bitcoin is worth $9,798 USD! In dollar value, your bitcoin investment has gone up more than 50%.

But Can You Lose Money?

There is one scenario where you lose money. If the price of bitcoin keeps dropping. This is the chart of bitcoin over the last year.

Not that I’m a chart expert, but it looks like bitcoin will bottom out between $3K and $5k. And it could possibly stay above $6k for the summer before starting to head up.

Remember, even when you are shorting bitcoin contracts, you can lose money in USD if the price of bitcoin goes down far enough.

Let’s say you bought one bitcoin at $6K and used that to sell short those $10K September contacts.

If Bitcoin drops to $5k, you have lost money. That’s is to say, you have 1.1 bitcoins now but they are only worth $5500 USD. It would have been better to stay out of bitcoin altogether.

But I don’t know and I don’t think anybody knows for sure where the price of bitcoin is headed.

But you have two choices.

You can keep some bitcoin or keep all your wealth in dollars (or Euros, or Yuan, or Yen).

But if you want to stay in bitcoin, why not make a little money on the side?