Home  »  Analysis • News   »   What’s Keeping Down the Price of Bitcoin? Would You Believe Low Interest Rates?

It’s ironic but true that the market accepting Bitfinex  as a safe haven for cash (NOT crypto) is driving down the price of bitcoin.

Bitfinex, a cryptocurrency exchange based out of Hong Kong is arguably the biggest in the world as ranked by volume (Beware of stats on coinmarketcap.com, all the exchanges ranked above it have been accused of “wash” trading, or artificially pumping up the trade volume).

Overseas investors are parking US dollars in Bitfinex to loan out to speculators who buying and shorting bitcoin on margin.

Here is the one number that every bitcoin investor should be looking at:

The Bitfinex “flash return rate” is the daily average interest paid to investors who lend money on margin to Bitfinex members who want to buy  or short crypto (usually bitcoin) on margin.

What is the difference between lending to Bitfinex and lending to the Greek government? Bitfinex has never defaulted on a debt.

Even when Bitfinex was hacked back in 2016 to the tune of $72 million, it issued tokens in lieu of payment to the lenders that were later redeemed at full value.

In comparison, Greece has been in defaulted more than half the time as an independent country.

That Bitfinex can raise money at 3.25% for its traders is a stunning endorsement of how “safe” the crypto-universe is becoming, according to international investors.

The Flash Return Rate is Capping the Price of Bitcoin

The FRR is now at or near an all-time low. Historically, the rate has been anywhere from 10% to 40% a year.

There is now $412,000,000 USD that is being using for margin lending on Bitfinex, driving the short position close to an all-time high: 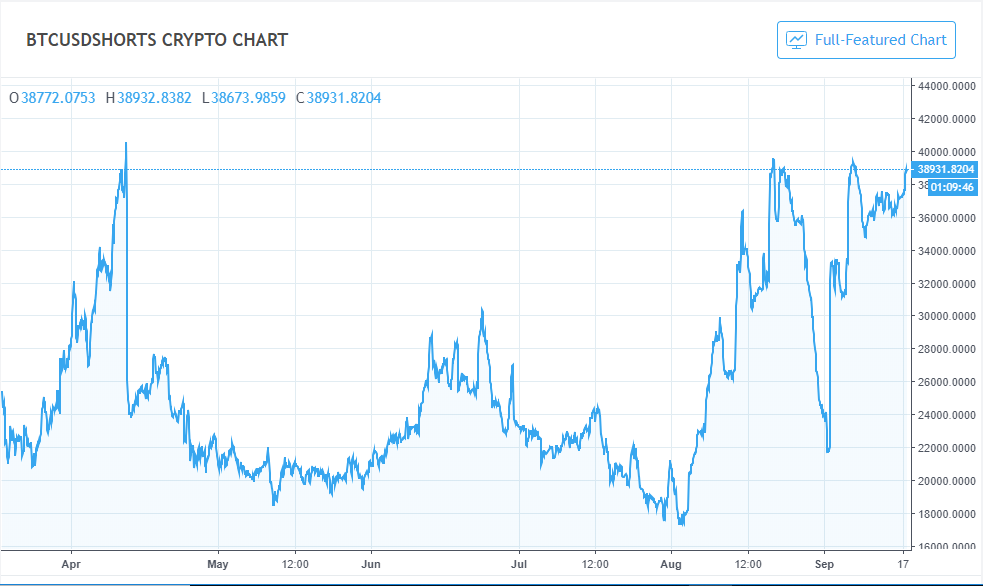 It now makes perfect sense for the big players to short bitcoin. Let’s say a big investor or “whale” wants to put up $25 million USD. Bitfinex allows borrowing on margin at 4-1 so that $20 million gets the whale $100 million to play with.

How Does This End?

The massive short in bitcoin has been enabled in large part by the dominance of Bitfinex (and to a lesser extent, other Hong Kong exchanges) in the world of crypto.

That dominance will end in a heartbeat once the SEC agrees to allow institutional investors to fully participate in the crypto-revolution.

For example, what would happen in Coinbase were to allow margin trade? How about if Goldmans-Sachs opened up a bitcoin trading desk?

But that is a little way down the road.

In the short term, there are two ways this can end.

Bitfinex is a cryptocurrency exchange. A meltdown in the price of bitcoin (precipitated by  massive shorting) should/might/possibly lead to panic withdrawals from the exchange, both in fiat and crypto-currency.

That would jack up the FRR from its all-time low back to historical levels, and remember it’s been as high as 40% in the past.

If and when the FRR hits 10% and higher, expect the shorts to close, thus driving up the price of bitcoin.

A possible second ending can be that one of the Bitfinex whales decides to take a long position to force a short squeeze.

New Currency Frontier readers are not the only people watching the BTCUSDshort chart.

Watching the Bitfinex whales shorting bitcoin is like watching a very high-stakes game of poker.

And watching the daily floating refresh rate will tell you which cards are coming up in the river.