Here is just a small sample of the negativity in the media:

It’s a truism of the investment newsletter business that bad news always drives down the market.
(I still remember Deepwater Horizon disaster in April 2010. At the time we were only running one newsletter publication which covered oil and gas stocks. It was not a good summer.)But bitcoin is proving itself to be an exception to this rule, having risen 37% since beginning of 2019.

But it gets weirder. It’s not just the financial media types who have a negative view of bitcoin and crypto in general.

The futures market of bitcoin has been stuck in bear territory for all of 2019 as well.

Here is a chart of the most liquid bitcoin futures contract in the world, the Bitmex XBTUSD contract: 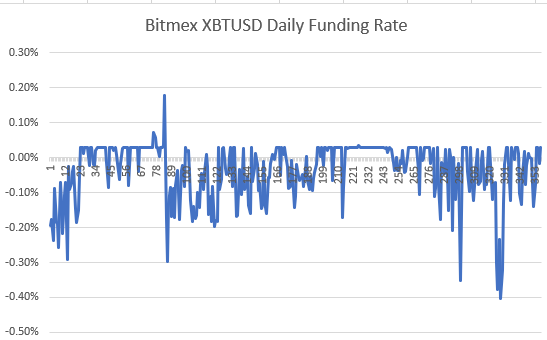 This contract iis perpetual, meaning it has no expiry date.

Bitmex is a peer-to-peer service, meaning the “house” will not ever cover a contract, therefore if there is imbalance in buyers versus sellers, there must a redistribution.

Therefore, every eight hours there is a distribution of funds to either the buyers or sellers of the contract, depending on the mood of the market.

For example, there are more sellers than buyers, then a distribution is made to buyers, to bring the price up to the pegged USD-BTC exchange rate, which is based on several worldwide exchanges.

Conversely, if there are more buyers than sellers, then the sellers i.e., the shorts, are paid out every eight hours.

These eight-hour distributions are guided by the “funding rate” which is posted in the Bitmex dashboard.

If the funding is positive, then the market is bullish.

If the funding rate is negative, then the market is bearish.

As you can see from the chart, except for a few days in February, the mood has been neutral or bearish.

So much so, that if you had bought the XBTUSD contract on the first of January, you would have had a return of 12%. That is excluding the appreciation of bitcoin against the US dollar (37%).

In total, your return on investment, in USD dollars, for buying the XBTUSD contract, would have been 53% for a four-month period.

Obviously, the collective “wisdom of the crowd” is not working when it comes to crypto.

If an investor just read stories about bitcoin and crypto in 2019, he or she would not be enthusiastic about buying.

Same goes for the futures market.

But one indicator would have told you it’s a good time to buy: historical prices. 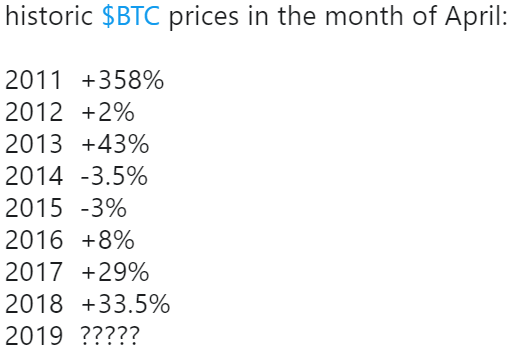 If we throw out 2011 as an aberration, we see that in the month of April, Bitcoin has either stayed flat or gone up an average of 33%.

Here are the numbers for May: 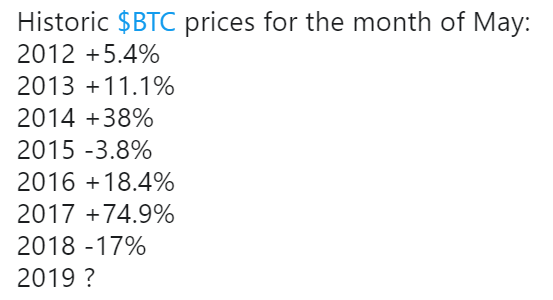 If you throw out the number from last year, when bitcoin was in a super-bear market that ultimately shaved 80% off its all time high, you can see May has historically been a very good month for bitcoin.

Does that mean the constant stream of negative news stories about crypto will stop? Probably not. Will the futures market turn bullish? That’s a more interesting question.

For myself, personally, I hope not. After all, I am being paid to hold bitcoin (okay, bitcoin futures contracts), and I don’t have an issue with that.