Trading on the Toronto Venture Exchange has been miniscule. Yesterday only 27,795 shares were traded. No day this week has seen more than 50,000 shares traded.

Looking at these numbers, nobody would guess that Hut 8 had a blowout second quarter:

Despite the bitcoin hashrate increasing from a peak of 48 million TH/s to 58 million TH/s, Hut 8 managed to mine more bitcoin (2816 versus — in first quarter).

Most impressively, the production cost of each bitcoin dropped to $2,757 from $3,950 quarter-over-quarter.

Are these earnings sustainable?

Meanwhile the hashrate has climbed to a peak of 82.5 million TH/s, or 30% higher.

If Hut 8 operated at maximum efficiency in the second quarter, and the price of bitcoin stays the same, that implies third-quarter revenue of $17 million ($28.3 x 60%).

With 90 million shares out, that is 7.7 cents earnings per share per quarter (or 31 cents for the year).

It would take a prolonged and deep slump in the price of bitcoin for Hut 8 to show an operating loss, and with $38 million in working capital, it could weather quite a slump.

The question remains: why does nobody care?

The Future Halving of Bitcoin Mining Rewards is Coming.

(To induce scarcity, the bitcoin algorithm halves the amount of bitcoin awarded to miners every 210,000 blocks, or roughly every four years).

The share price of a company should not only consider what happened in the past, but what may happen in the future.

If everything stays the same (hashrate, bitcoin price, operating), then in May 2020, Hut 8 will still be a profitable company, but only barely.

That’s why, over the last three months, Hut 8’s share price is strongly correlated with the price of bitcoin: 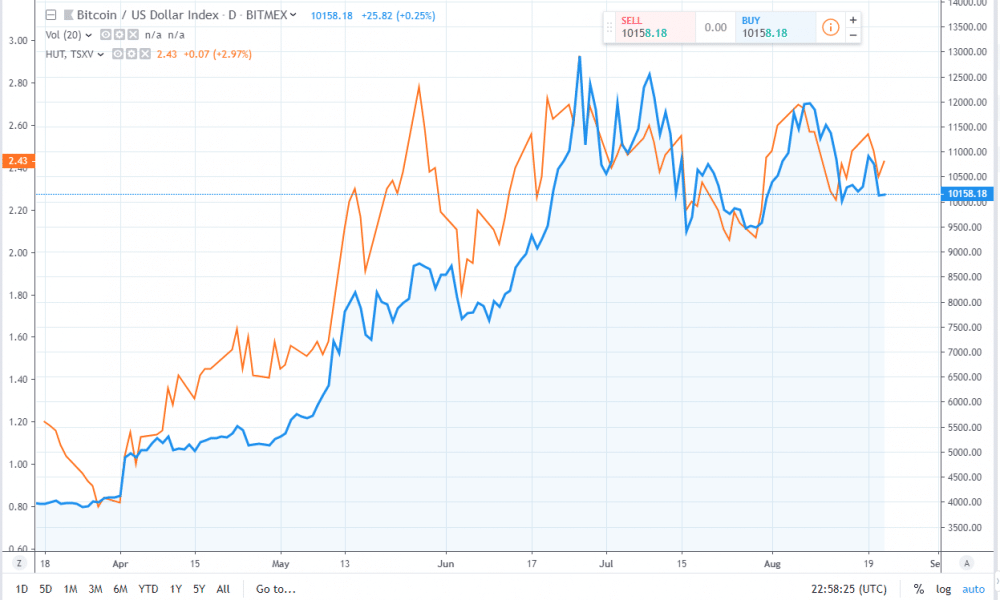 Anybody who has read my newsletter in the last year knows I am a long-term bitcoin bull.

In the 12 months after the halving, bitcoin increased in price by 7537% and 450% respectively.

I have been accumulating Hut 8 since it was at $1.55 and haven’t sold any yet.

Of all the stocks in my portfolio, it’s the bitcoin mining stocks that give me the least amount of stress as they are profitable, have cash in the bank, and excellent growth prospects.

Perhaps one day other investors will see that too.

Editor’s Note: I bought some Overstock (OSTK-Nasdaq) on news that the CEO quit. See my previous article on Overstock if you are curious as to why.