I felt bad buying as it was obvious we were in a housing bubble. But I was married with a toddler and another one on the way. And renting a house in Vancouver was proving to be near-impossible, at the time.

I was convinced I was going to be underwater on the mortgage after the correction. But I had made a bit of money investing in the stock market, so I allowed myself this one bit of financial foolishness. My wife and I really liked the neighbourhood.

For the next ten years, the conventional wisdom was that Vancouver housing prices would crash. This was one of the most popular websites to visit if you lived in Vancouver: 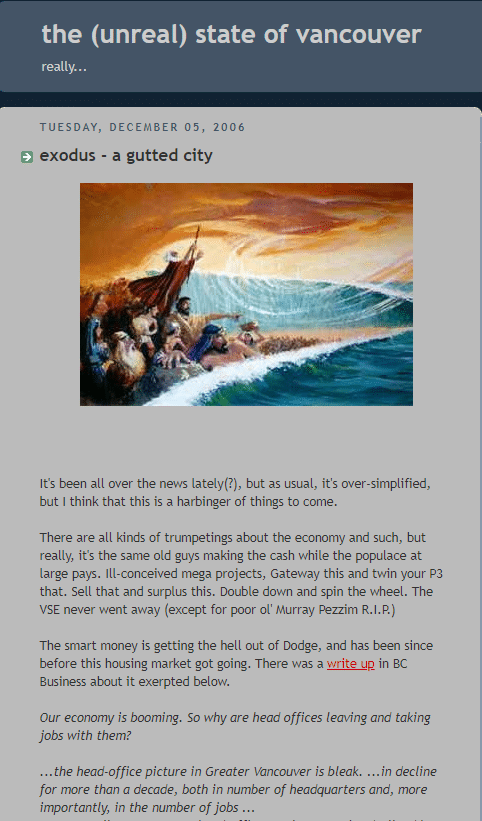 He had a great run of about four years. Most if not all his readers agreed with him that Vancouver was headed for some sort of urban apocalypse. 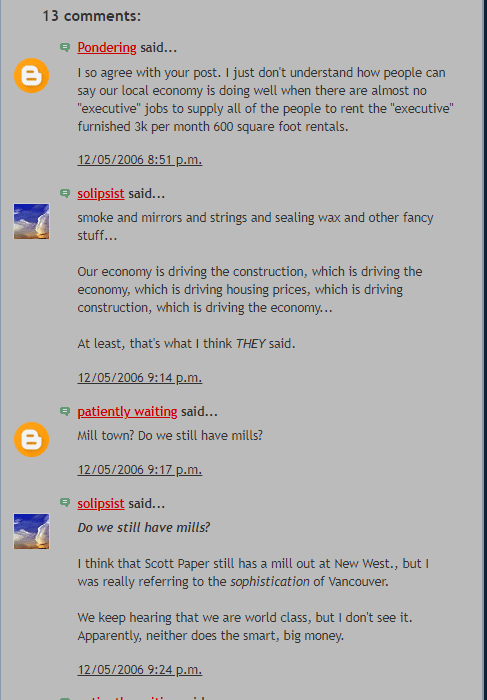 And don’t misunderstand me. I was one of those people.

All through the first decade of the 21st century, I went to neighbourhood house parties, drank my red wine (beer gives me gas and gin makes me pass out) and nodded to friends, yep, this year housing prices are going to crash.

But time marches on. Kids grow up. They graduate from elementary school and then high school.

You wake up one day and see this real estate listing. It’s about one block from my house: 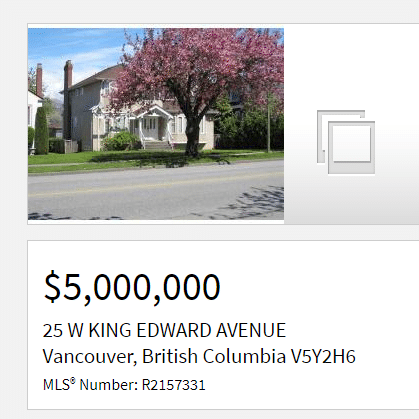 https://www.realtor.ca/real-estate/18056086/25-w-king-edward-avenue-vancouver
There was never a crash. We were all wrong.

We always blamed offshore money. One year it was Hong Kong money. The next year it was Iranians in North Vancouver. One year there was a rumour of a flood of refugees from Silicon Valley, moving north because they hated Bush and liked to hike in the mountains.

Perhaps that was part of the reason. But the real reason was this: 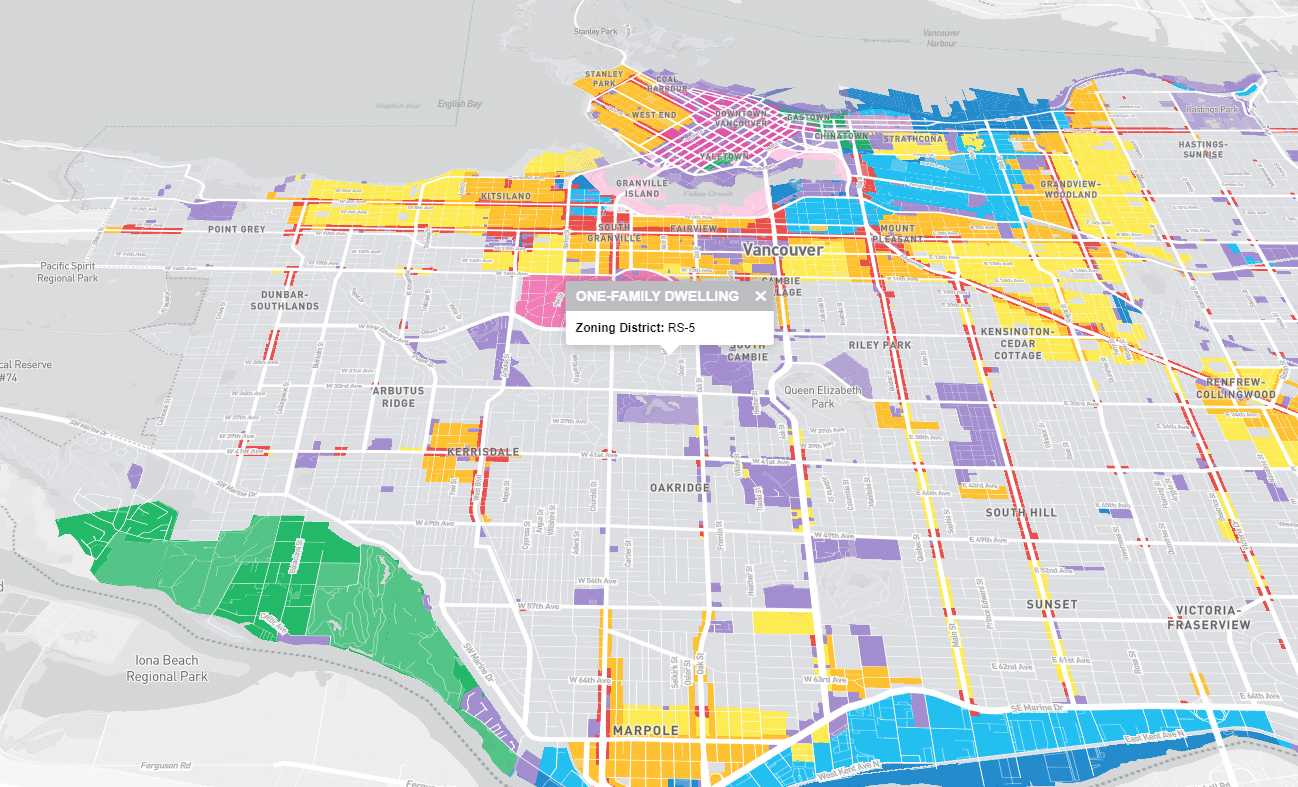 This is a map of Vancouver. There are two things I want to call to your attention.

One is the SIZE of Vancouver. It is very small, only 115 square kilometres.

The island of Manhattan is 59 square kilometres. Vancouver is not even twice the size of Manhattan.

Secondly, look at the zoning. Lots that allow for multi-family dwelling make up less than half of all available zoning in an area less than twice the size of Manhatten.

On every lot that is light gray, you can only build a house for ONE family.

And the light yellow. That’s a two-family dwelling.

As any city planner will tell you, the zoning in Vancouver is restrictive to a degree that is close to insane.

Guess what we talk about NOW at those Vancouver house parties (well, what we talked about, before COVID quarantine)?

We don’t talk about prices. We talk about permitting. As in, when is the city granting a permit to build a four-story apartment next door to our single-dwelling house?

The housing “bubble” in Vancouver has been going on for two decades now. It never crashed. It never will, at least for me, in the sense that my house is going to worth only $418,000 again.

What Does This Have to Do With Cryptocurrency?

Sometimes there is a reason why an asset value increases in value dramatically, and for a long time, and never goes back down.

I believe crypto is another example of a bubble that is never going to pop, and here is the reason.
The world banking system collects from its user base anywhere from $2 trillion to $2.65 trillion dollars a year in transaction fees (depending on which source you believe).

The “user base” happens to be any and every person on the planet who has opened a bank account.

A very small percentage of that user base is now opening cryptocurrency accounts at exchanges around the world, and a percentage of those users are creating Bitcoin and Ethereum wallets for themselves.

And with those banking services, transactions are collected.

Miners in Bitcoin collect $60 million a day in transaction fees along with the minting of Bitcoin.

The question is not when will crypto replace the world banking system. At present, that’s a ridiculous question.

Here is the question to ask today: When you look at the financial system, and then crypto, what you do see?

And the answer depends on what type of person you are.

You may think the world banking system is a pillar of Western society, the greatest invention since the printing press, and crypto to be a perversion that should be stamped out (Hello Charlie Munger).

Perhaps you are on the other end of the spectrum. You see crypto as salvation, with the world banking system corrupted by the rich elites to exploit the other 99%.

But there is a third viewpoint, the technical viewpoint.

Technically, try to look at crypto and the world banking system as nothing more than communication protocols.

The bitcoin and Ethereum network move tokens and coins around using the protocols that are open-source and can be tweaked by anybody who is a member of the developer community.

Meanwhile, there are a mish-mash of CLOSED protocols in the world banking system: SWIFT, Interac (Canada), ECH (US), and the Visa/Mastercard network.

Are some of these closed protocols at present superior to the open protocols of crypto? Absolutely.

For example, the Visa/Mastercard network can process many more transactions per second than Ethereum, by an order of magnitude.

But that’s right now. An open-source protocol with an active developer community is continually being upgraded.

The history of tech in the 21st century has multiple examples of open protocols beating closed protocols due to the superior organizational structure of an open-source developer community.

Any tech investor who has been around for a couple of decades knows this.

TCP/IP is the open-source data protocol for the internet. In the 1990s, it was slow and buggy and closed protocols like Netbeui by Microsoft and Netware by Nowell were superior in transaction speed and more reliable.

By the early 2000s, Netbeui and Netware were obsolete.

Linux in the 1990s was an interesting experiment. Now more than 96% of the world’s top 1 million servers run Linux.

Linux is an open-source operating system that ate the internet. Microsoft Windows is a dividend stream for conservative tech investors.
The radicals have it wrong when they say crypto is going to replace the world’s banking system.

In ten years’ time or less, banks will be transferring US dollars, British pounds, Euros and Yen  using the Ethereum network. And the average banking customer won’t even know, or care.

Like TCP/IP and Linux, the crypto-protocols of bitcoin and Ethereum will be another technological advance for human civilization but will stop making headlines and fade into the background.

This bubble is not going to pop.