Home  »  Analysis   »   Your Neighbour Says They Made a Killing on Dogecoin? Don’t Be Too Sure About That

Lately, my Twitter feed has been popping up with tales of ordinary folks paying off their mortgage with their massive gains on Dogecoin.

Because in the last 3 months, Dogecoin has gone up five million percent or something like that.

Maybe you feel a bit depressed because you think you missed out.

Let me make you feel a bit better.

I don’t think many retail investors made a killing on Dogecoin. Very few in fact.

Let me explain why. Here a chart of Dogecoin: 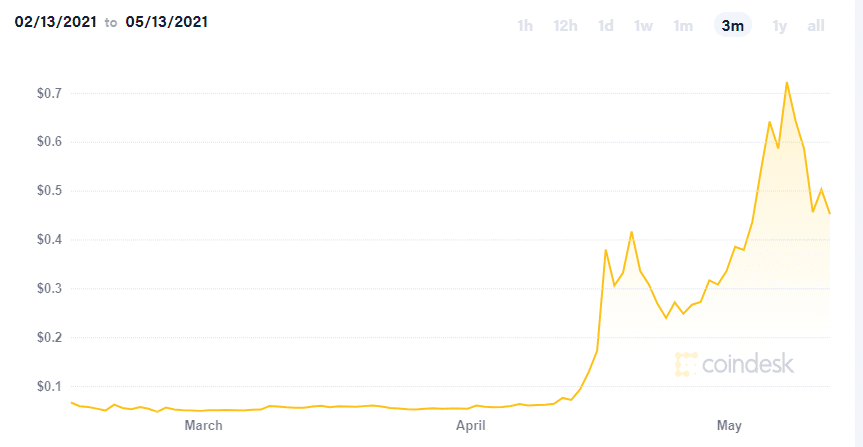 As you can see, Dogecoin is trading below ten cents for the first half of April until it zooms up to nearly 38 cents on April 16th.

There are lots of news stories saying Dogecoin was recently trading below a penny, and that’s true. Under a penny until Jan 27th of this year, when it zoomed up to 4.5 cents from .8 of a penny.

Anyhow, very few retail investors were accumulating at that point. Here a chart of the number of daily transactions per day.

In late January, there was a spike upwards to 60,000 transactions but that is only an increase of less than 30K transactions. Because of bot trading, you must make the assumption that there were FAR fewer new Dogecoin investors in January than 30K.

To me, it looks like a group of investors were buying up supply.

Take note of the second big burst of transactions in March. There is more accumulation but the price did not go up at all.

Now we get to April and the beginning of the pump.

Now it is true that Elon Musk first tweeted about Dogecoin at the beginning of that month. But come on, it did it as an April Fools’ prank: 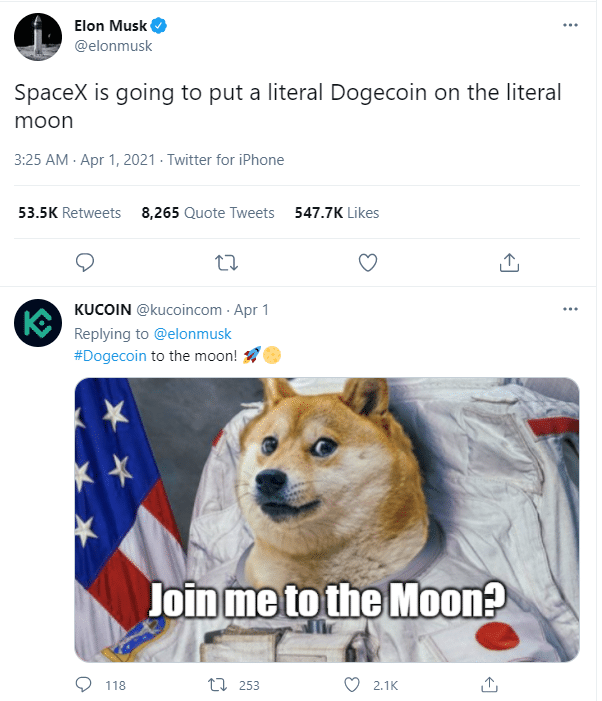 And the price of Dogecoin goes nowhere for two weeks.

Because, come on, who is going to buy a digital coin because some celebrity tweets about it on April fools day?

And if even if you were enough of a genius/lucky to buy at the beginning of April, you had to wait until April 16th for the next big bump up to 38 cents which happened super-fast.

But then, coincidentally (or not) Elon starts tweeting pretty hard about Dogecoin on April 16th. And bang, it goes to 38 cents in less than 12 hours.

Okay, now let’s look at your return on investment depending on your entry point in the last six months.

The January investors have made a return of 6625%. Very nice. But remember, those would be the Dogecoin owners who didn’t sell when it went more than 400% in one day.

I would bet that is a very small number, because who the heck doesn’t sell at least part of an investment when it goes up 400% in one day for no good reason.

April fools investors made 883% Still nice. But you made an investment based on a tweet on April’s Fools. Now if you bet just beer money, good for you.

But if you bet your mortgage, at least admit you were lucky, not smart.

Now is here the kicker:

If you bought when Elon started madly tweeting about Dogecoin in mid-April, you are up 40%.

That’s a great return if you want to beat the S&P average. But we are in a raging bull market in crypto and plain old Ethereum returned more than 60% over that same period.

And if you sold yesterday in a panic, you only locked in an 8% gain.

Remember earlier this month Dogecoin reached a high of 72 cents. Right now there are a lot of retail investors new to crypto holding the bag.

The coin is cursed.

If you are a pump and dump king, then Dogecoin is the perfect coin for you.

Ever heard of a character called Wolong? He is the most famous pump and dump master in the world of crypto.

Nobody knows if he is still running his schemes, but he gave one genuine gift to the world, his manifesto: “The Game of Deception.”

It is considered the bible of pump and dump for crypto, studied by scam artists all over the world, for years.

It was written in 2017. You can read it here. I strongly recommend you read it before ever buying another altcoin.

The example he uses for a classic pump and dump scheme is, of course, Dogecoin.

That guy on the Twitter feed who made a million dollars off Dogecoin? Don’t believe it.