Home  »  News   »   Celsius Implodes, Markets Collapse, But You Should Really Be Worried About the Bank of Japan

As usual this year, hell waits for the weekend to break loose.
Last Friday afternoon, I sent out a bulletin to my paid members saying something was up with Ethereum:

Just a few hours after writing that bulletin, the rumours intensified that Celsius was technically insolvent.
On Saturday, the run started.
By Sunday, all withdrawals and transfers from Celsius were halted: 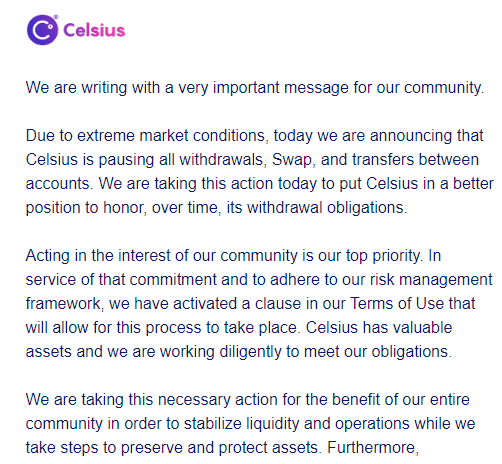 I will give a short summary of what happened and what is happening:

Of course, it could get even worse. There are now rumours that Celsius was using leverage, which in a bear market is a sure path to ruin.

If Celsius goes belly-up, this will rank as one of the worst catastrophes in the history of crypto. As of May 17th, Celsius owned $11.8 billion in assets which of course has shrunk considerably in the last month.

By the way, CDPQ, Canada’s second-largest pension fund, has a $400 million investment in Celsius.

Get ready for major headlines in the Canadian media this week. This is going to be much bigger than the Quadriga FX scandal.

Is It Time To Buy the Dip?

Are you kidding? No.

Sure, I told my paid subscription group a couple of weeks ago that Ethereum below $1500 was a very attractive investment. Well, I changed my mind.

Not because of Celsius, or Terra Luna, or because of the behaviour of the usual degenerate gamblers who time and time again send crypto prices to the basement (see Mt. Gox, Bitfinex, QuadrigaFX, Bitconnect, et al.)

No, sadly, grifters come with the territory.

I don’t want to buy anything right now because when I looked at my portfolio this morning everything was in the red, including my hedge plays in oil, gold, and uranium.

That’s disturbing and not just because of the losses.*

It’s disturbing because EVERYTHING is tanking. But why?

I don’t know for sure, but there might be a clue on the other side of the Pacific ocean.

Right now the Bank of Japan (BOJ) is having problems holding the 10-year yield curve for Yen bonds at 0.25%.

In theory, the BOJ  should never have a problem because it has the power to do unlimited buying of the bonds to hold the rate down.

However, Jim Bianco, one of my favourite guys on Twitter, notes that the rate didn’t hold: 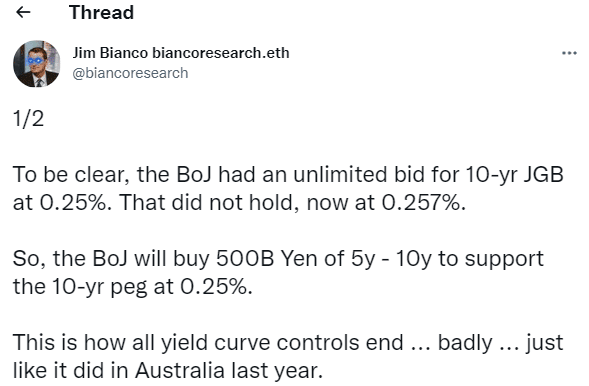 Well, as the bond market goes, so goes the stock market. Earlier in the year, Mr. Bianco noted that the bond market had its worst day in decades. I wrote that up in a story here on January 11th.

After that day, equities started to tank and kept tanking.

If the BOJ can’t keep the yield curve under control, that means the third-largest economy in the world has effectively lost control of its monetary policy i.e. it can’t impose its will on the market.

What will happen then?

I don’t know. I don’t think anybody knows. But I am betting it won’t mean sunshine and unicorns for the retail investor.

*Paid subs were notified in December of 2021 of a 50% drawdown in the portofolio which was converted to cash. That was a mistake. Should have been 100%. Oh well.