I have been buying (and selling) bitcoin mining stocks since 2018 and in the long run have done very well. Here is a list of articles that I have written about the sector here.

Am I an expert on the sector? I don’t know about that. But the great thing about bitcoin mining is that you don’t have to be an expert to make profitable trades if you are patient.

Why? Because most stories in the media on bitcoin mining are slanted towards negativity and that leads to people making bad trades (as in selling).

But, like with a lot of assets in crypto, when the negative hype is piling up so fast you need wings to stay above it, that’s usually a good time to buy.

An article on DIGG (a popular social media hub) about bitcoin mining was published 6 days ago and has accumulated 22k reads.

The topic is: How much does it cost to mine one bitcoin? But it’s really a bash piece on bitcoin mining that gets a lot of things wrong.

For example, the sentence in the article states you could power a household for 13 years on the energy needed to mine one bitcoin: 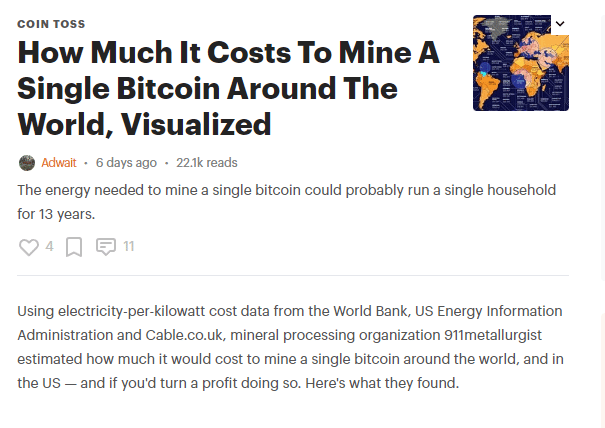 First of all, it’s not 13 years, unless you are talking about a household in some third-world country that washes laundry by hand and eat meals off the dirt floor.

But that’s not the worst sin I see in the article.

The numbers in the articles are only somewhat correct if you make some wrong assumptions.

The worst assumption is that bitcoin miners pay a residential i.e. urban rate for electricity which the article states is about 21 cents per kilowatt hour.

No bitcoin miner pays that much. Most pay only 4-5 cents a kilowatt, and some pay as little as 2-3 cents. Bitcoin miners pay a commercial rate for electricity.

The days of profitably mining bitcoin in your home by plugging the rig in your household outlet ended years ago.

Now, the next question that most of you are probably answering is, how come bitcoin miners get their power so cheap?

There are a few reasons, but the big reason that never seems to be explained in the media is that bitcoin miners use stranded power. Let me explain.

I live in Canada. Up north, we have a lot of lakes and rivers. We also have a lot of dams up here that can generate electricity in the form of hydropower. But there’s a problem with that.

Nobody close to the dam has a need for power. There are not a lot of cities or urban centre up north. The power is stranded.

Building transmission lines to carry the electricity generated by the dams across hundreds if not more than a thousand kilometres is cost prohibitive.

And this isn’t a problem that exists just in Canada.

Worldwide, there were 4418 terawatts-hours (not mega, not giga) of electricity generated in 2020 by hydropower.

It is a safe assumption to make that there are tens, if not hundreds of terawatts-hours not exploited because the source of hydropower is too far away from an urban centre, or industry. You need power line infrastructure. That’s not cheap.

HOWEVER, bitcoin miners don’t need transmission lines. They convert the power into hashing power onsite. They only need a connection to the internet, i.e. through a single optical fibre.

The cost to carry data over a large distance is an order of magnitude cheaper than to carry electricity.

Hence, most (smart) bitcoin miners put their mining rigs in locations that have large amounts of electrical power nearby with no competition (i.e. far, far, away from population centres).

That is why most articles about bitcoin mining “miss the point.”

And that gives us a chance to make a favorable trade when most of the trading public reads these types of misleading articles and mashes the sell button.

So why did I buy options last month?

One point that the article DOES NOT make is that bitcoin miners that are mining with the latest gear are generating positive cash flow. Let me show you.

The best bitcoin mining rig is the Antminer S19 Pro.

My favorite one is here: 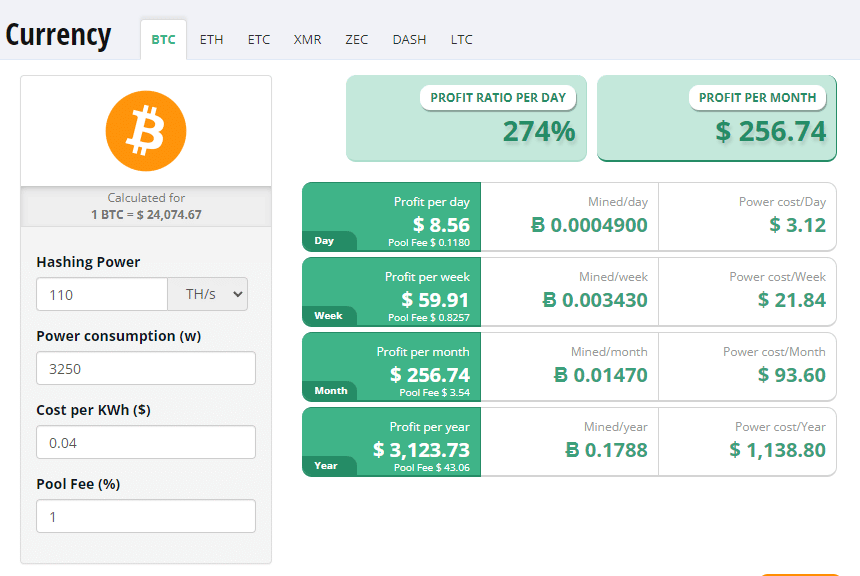 As you can see, even with Bitcoin at $24K, the mining rig is generating positive cash flow.

Earlier in the summer, bitcoin mining stocks were priced at close to net asset value, and they are still at least 80% off their all-time high as most everybody thought the miners were bleeding cash.

And some of them are. Some are in heavy debt. Some are mining Ethereum, and that business model is going away very soon.

But not all of them. For a well-managed bitcoin mining firm, the core business is still profitable. They are not going to go bankrupt.

Therefore, in my opinion, options on a certain bitcoin mining stocks were priced stupidly low.

If you read the article on Digg and stopped there, you wouldn’t have been tempted to buy.

But if you had spent just a little more effort, and dug a little deeper, then maybe you would have bought some stocks or options like I did and doubled your money.