Home  »  News   »   Where the Money is Going, Now that No One Can Be Trusted
Here’s a short list of crypto firms that went belly up this year:

Okay, let’s state the obvious. The losses are shocking. But the losses are more shocking to experienced crypto traders than to novice crypto investors.

Do you want to know why?

Because the old hands know that while running a crypto-trading house is not easy, it’s usually VERY profitable.

This is from an article I wrote back in 2018 about Bitmex, an overseas crypto-derivative house then based in Hong Kong.

“For the month of November (2018), the total volume of trades (on Bitmex platform) was $56 billion.
The busiest day was November 16th, with a record $5.45 billion in trades.
…. What is important to realize that Bitmex makes 0.05% off every trade.
Therefore, Bitmex made a cool $27,977,500 in the month of November off of trading fees.”
Note that Bitmex made nearly $28 million USD in one month alone in 2018 when bitcoin traded BELOW $5k and was pretty much the only game in town (Ethereum was trading below $300 at the time).

Bitmex isn’t the dominant player in the crypto space that it used to be. Even though it was based overseas, it ran afoul of US regulators in 2020 and its key executives were arrested. More on that later.

So how did the new kids on the block lose all that money?
The short answer is they made “directional bets.”
The “old houses” like Bitmex, Bitfinex, and Binance never made directional bets. They didn’t bet on the market, they made the market.
They hedged, and hedged, and hedged some more, always limiting market exposure, and generating revenue on commissions, market-marketing, and cash-and-carry trades.
Those three strategies require patience, discipline, and the technical acumen to find an edge and exploit it.
What were the money-making strategies of the “new” crypto firms?
Accumulate a lot of retail money and then loan it out to shady hedge funds like Three Arrows Capital and Alameda.
I am not kidding. That was their strategy. They had not a clue what to do with the avalanche of money that was pouring into their accounts so they gave it to grifters who promised them 10% yield (see Terra and Luna).
In case you were wondering, the executives of the “old houses,” are hopping mad that the new breed fouled the soup (still trying, after all these years, to keep this blog G-rated, but it’s hard).
Arthur Hayes, the former CEO of Bitmex, is incensed. In his latest essay on Medium, he calls out the new breed:
“The two largest muppet crypto trading firms, Alameda and 3AC, both grew to such a gargantuan size because of cheap borrowed money. In the case of Alameda, the polite way to put it is that they “borrowed” it from FTX customers — although others might call it theft. In the case of 3AC, they hoodwinked gullible and desperate CELs to lend them funds with little-to-no collateral. In both cases, the lenders believed these and other trading firms were engaged in super-duper-smart arbitrage trades that rendered these firms immune to the vicissitudes of the markets. However, we know now these firms were just a bunch of degen, long-only punters in meth mode.”
You can’t blame Mr. Hayes for being salty. He never lost a dime of customer funds, but he got arrested and convicted for something American securities regulation violation something.
Meanwhile, Sam Fried-Bankman is still vacationing in the Bahamas, as far as anybody knows.
That’s the Bad News, But What’s the Good News?
You would think everything in crypto is tanking or dead. But that’s not correct. As I wrote last week, the NFT sector is still thriving.
And so are tokens on level 2 blockchains like Arbitrum: 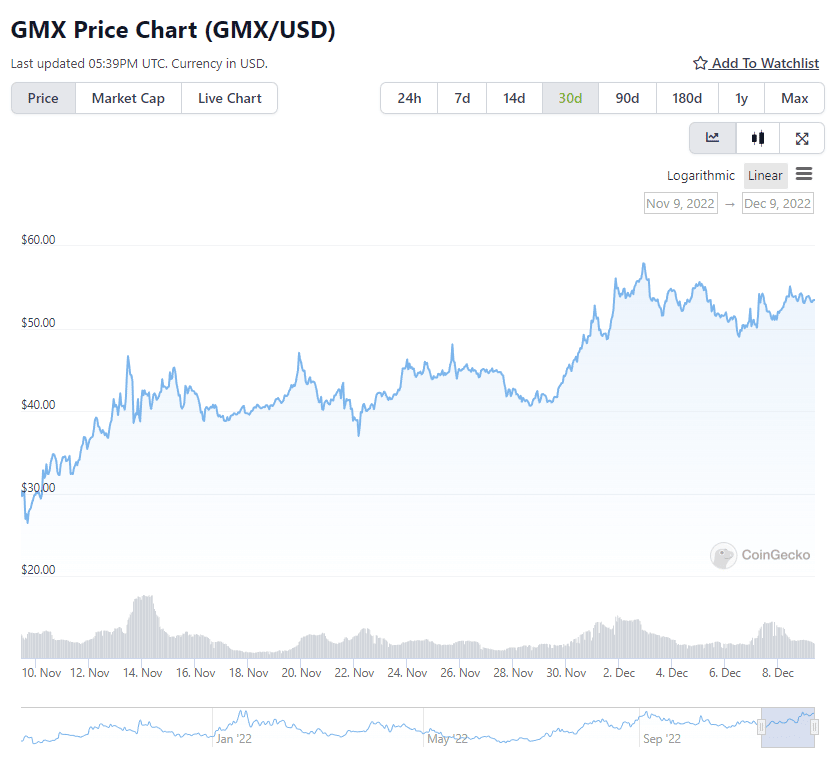 The GMX token is the token for the GMX decentralized perpetual exchange on the Arbitrum blockchain.
It’s a crypto-derivative exchange. But it’s not owned by Sam Bankman-Fried or by Arthur Hayes.
Profits from the exchange flow to the token holders of GMX and to the liquidity token, GLP.
At present, since its inception, the total trading volume on GMX is more than $89 billion. That’s sound like a lot of volume, but only about two months worth of Bitmex volume back in the glory days.

There’s room to grow. A lot of room.

This is the future of crypto. Because you don’t have to trust anybody. Just trust the code.
If you think the game is unfair, then own a piece of the game.
And this game is just starting:

Only 1 billion is locked in blockchains like Arbitrum and Polygon, which offer fast secure transactions that cost only pennies.
When money flows back into crypto (and it always does, I bought my first bitcoin in 2013), where do you think it’s going to go?
To the centralized exchanges headed by figureheads who smile and say “trust me?”
Or to the new decentralized exchanges, where trust is not needed?
For me, it’s an easy call.
DJ