The bedrock of cryptocurrency is proof-of-work (POW) mining. Simply defined, a mining rig (computer server) competes with other rigs in the network to solve a mathematical puzzle.

Because transactions are validated and trustworthy within a digital ledger (the blockchain), it is possible to issue digital IOUs, or “coins”, against the ledger.

Bitcoin, Litecoin, Ripple and DASH all are digital ledgers containing transactions that are permanently embedded in the ledger’s blockchain.

It’s worked for Bitcoin since 2009. The Bitcoin network has never been hacked (exchanges are a different matter) and the network today is in the opinion of many to be unhackable.

But there are challengers knocking on the door.

So there is now a rise in a coin type that secures the network by using an algorithm called proof-of-stake.

And while there are many options for investors to gain exposure to traditional cryptocurrencies via buying Bitcoin miners on the Toronto Stock Exchange (Venture), or TSXv, there has been virtually no chance to invest in any company with direct exposure to proof-of-stake coins.

But What is Proof-of-Stake?

Implementing proof-of-stake can be very complex, but the idea is simple: POS uses a voting mechanism to validate transactions.

Instead of mining rigs, users with a stake in the network vote on which transactions should be processed. The stakeholders who vote in the majority get rewarded with coins, the losing side get no coins at all (or even punished, in case where a stakeholder is suspected of trying to push through fraudulent transactions). Proof-of-stake advocates stress the following advantages over traditional     mining:

So these proof-of-stake coins use MUCH LESS computing power.  And that’s important because these second generation coins do much more than act like digital money.

That’s one reason why Apple became such a big company—developers put lots of applications on that platform.

The founders/developers of each of these coins (Ether, Dash, Ripple etc) want other developers to build apps on their platform, and cement their acceptance in the market.  This can GREATLY increase the value of the coin, as you can only buy the DAPPS with that coin.

Cryptokitties is the perfect example of a DAPP on a second generation coin, in this case Ethereum. 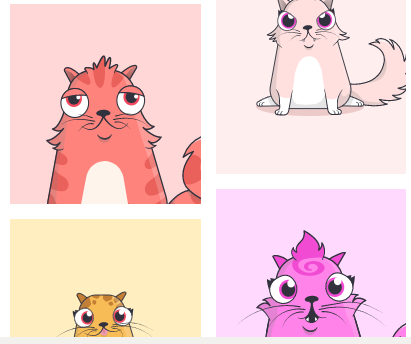 Cryptokitties are virtual pets that “live” on the Ethereum network; it is a DAPP—a digital application. The developers of this DAPP made millions as people around the world wanted to actually buy Cryptokitties; the median price in early December was $25 but one went for a crazy $114,000!!!

You could only buy Cryptokitties with Ethereum…and Ethereum went from $468 USD on December 1st to $1400 USD January 13th—after Bitcoin was already crashing.

But there was also HUGE congestion from Cryptokitties trafficking. Transactions times went from 10 minutes to 3 or 4 hours (or even worse) and for one week in late December, there were fears that whole ‘Ether’network would flounder.

Cryptokitties showed the world two things about the second generation coins. One, a killer app can send the value of the coin through the roof.

Secondly, that same killer app can bring down the network.  So coins need to reduce the amount of power needed for mining and increase it for the big wave of DAPPS that is as surely coming as an eastern sunrise tomorrow.

How Many Coins out There Use Proof-of-Stake?

Proof-of-Stake coins are very new. The top five cryptocurrencies by market cap use proof-of-work but they have been around for years.

But in the next tier, from 6 to 15, you see at least six coins who have implemented proof-of-stake algorithms:

Here is the chart of one proof-of-stake coin called Nem: 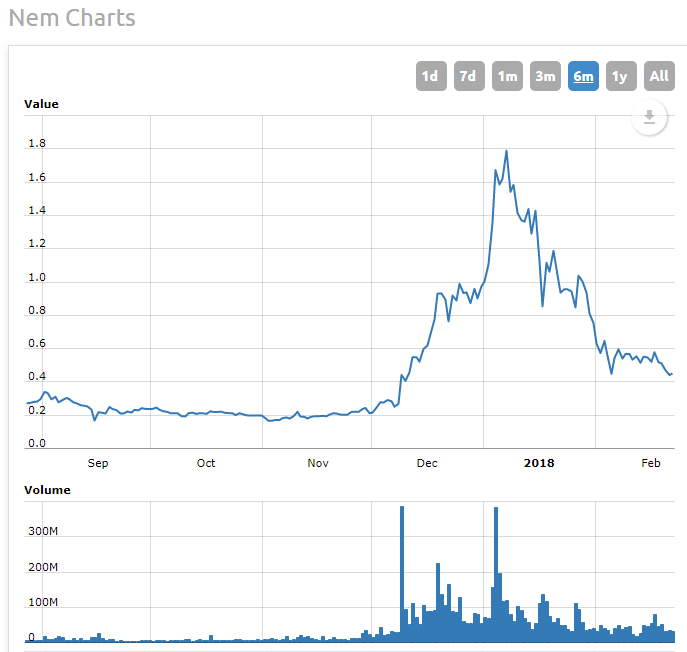 In the last six months, NEM is still up despite the horrible December and January correction. Best of all it only has a market cap of just over $ 4 billion USD. Compare that with Bitcoin’s market cap of $185 billion.

Another proof-of-stake coin is NEO: 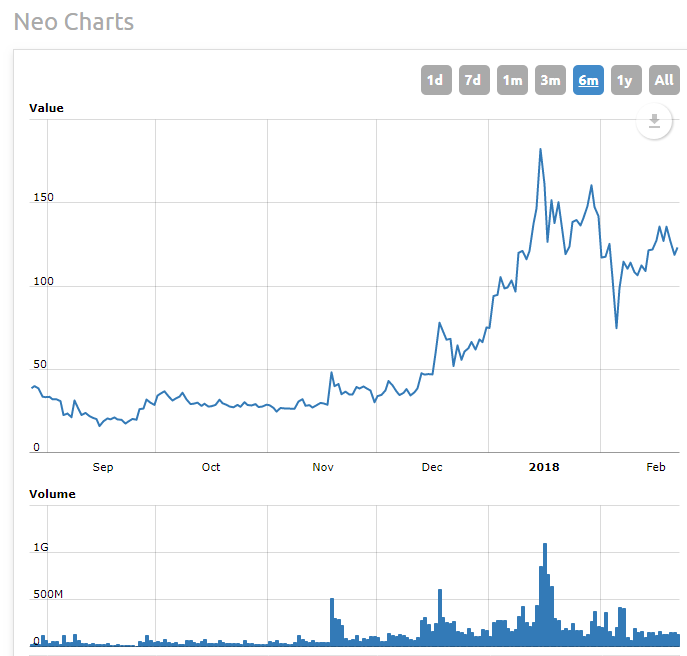 The value of this coin has held up better and that is reflected in the market cap: $8 billion USD.

The Elephant in the Room

I believe Bitcoin will stay proof-of-work forever as the development team is too conservative to move to proof-of-stake.

The second-largest coin in world by market cap is Ethereum at $85 billion USD. It’s currently proof-of-work but it’s moving to proof-of-stake under a development project called Casper.

The release of Casper has been pushed back more than once but now it looks like it will be released by end of 2018.

And the first release will only be a hybrid model, that is to say, combining both proof-of-work and proof-of-stake to validate transactions.

But the fact that Ethereum is even contemplating moving to POS is huge validation for these projects.

How Will Neptune Stake Technologies Create Value for Investors?

Proof-of-stake coins offer the chance for payouts to the stakeholders. NEO and NEM currently yield 4.0% and 4.5% for stakeholders.

It is of course the chance for extraordinary capital gains that should attract investors but the yield should pay the administrative costs of the holding company.

Capital structure has not yet been released but I imagine should be released shortly.

Each Neptune DASH shareholder will get some number of shares of Neptune Stake at price much lower than the financing.

Fidelity owned 10.94% of Neptune Dash when it listed and just recently added another 1.1%

Who Will Win, Proof-of-Work or Proof-of-Stake?

It is the opinion of this newsletter that after heavy debate and even mudslinging over half the internet, the match will be declared a draw.

Proof-of-stake has huge advantages over proof-of-work once the algorithms have been validated. But Bitcoin will stay proof-of-work forever and will never die.

In future articles, I will write about the promise of proof-of-stake, and counter predictions about the death of POW.

Most of all, I will look for the best POS coins that can make me money.

But for now, I will keep my shares of Neptune DASH.

Neptune management has reviewed and sponsored this story.The information in this newsletter does not constitute an offer to sell or a solicitation of an offer to buy any securities of a corporation or entity, including U.S. Traded Securities or U.S. Quoted Securities, in the United States or to U.S. Persons.  Securities may not be offered or sold in the United States except in compliance with the registration requirements of the Securities Act and applicable U.S. state securities laws or pursuant to an exemption therefrom.  Any public offering of securities in the United States may only be made by means of a prospectus containing detailed information about the corporation or entity and its management as well as financial statements.  No securities regulatory authority in the United States has either approved or disapproved of the contents of any newsletter.
Ross Pilot is not registered with the United States Securities and Exchange Commission (the “SEC”): as a “broker-dealer” under the Exchange Act, as an “investment adviser” under the Investment Advisers Act of 1940, or in any other capacity.  He is also not registered with any state securities commission or authority as a broker-dealer or investment advisor or in any other capacity.