Home  »  Analysis • News   »   Slamming the Door on Your Competition

HIVE Blockchain Inc. (HIVE-TSXv) was very smart to go out and raise CAD$151 million from the capital markets in 2017 when cryptocurrency was in full mania.

As they released their first REAL quarterly on March 1—with real revenue, almost $100 million cash on the balance sheet and fast rising revenues on the immediate horizon as they deploy that cash to get big fast, they showed the Market that crypto-mining is a real business.

This quarterly really separates themselves from any public company competition…for the simple reason that the equity window—the ability of public crypto-companies to raise more money to expand—is now firmly shut.

The Market is a fickle witch, and while you could fit a Boeing 747 in the equity window in the fall of 2017, now you couldn’t fit the smallest drone into it.

For now, nobody can raise money to expand.

But by September 2018, HIVE will have 44.7 megawatt of mining capacity spread across four data centres, and still have plenty of cash on hand.

Sure, it’s been a hard slog with the share price, with lots of cheap stock hitting the market on a regular basis, driving the stock below $2.00 for most of February.

But HIVE is virtually guaranteed to be the first public cryptocurrency miner to build out to 100 megawatts. And with scale comes ever increasing margins: 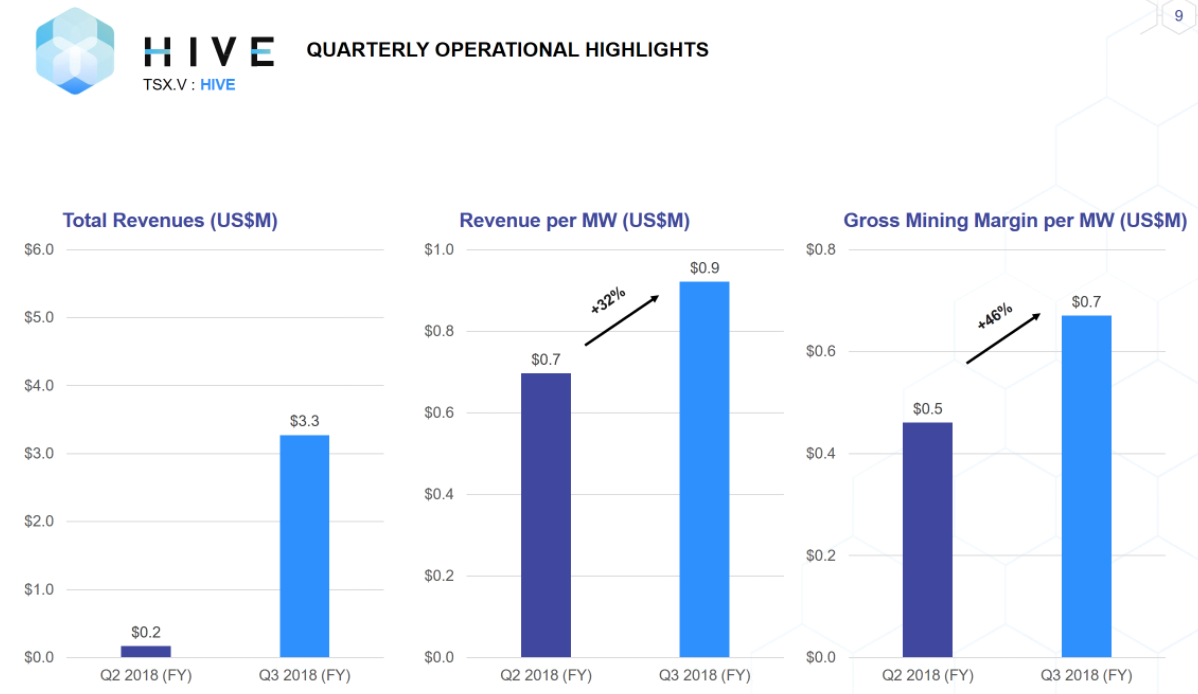 By September 2018, taking into all facilities coming online and have been paid for, HIVE will have annualized revenue of $150 USD million a year, assuming cryptocurrency mining profitability stays the same.

No other competitor to HIVE is going to raise $100 million or even $50 million in an investor financing through the Canadian capital markets. That door is shut for now:

As I wrote in a previous article A Great Migration, Part II, to survive, miners must get big, really fast.

There are at LEAST four other cryptocurrency miners in Canada who are planning to hit 40 MW of capacity by end of summer of 2018, with plans or promises to hit 100 MW by 2019.

But they can’t do that without capital. And right know I don’t know where they are going to get the money.

However, by end of year, HIVE should be building out at least 100 MW of capacity. They have the cash and technical expertise to do so.

When HIVE released its quarterly earnings yesterday, it showed it has the strongest balance sheet in the industry by a wide margin.

In the presentation to shareholders this morning, HIVE management disclosed that on capital expenditures of $38 million, they have an annualized run rate of $40 million.

That’s like you or I buying a house and then getting the cost of the house back in rent in less than one year.

At present, HIVE has 36% return on capital investment.

HIVE’s share price is trading flat today which is not a surprise.

There is still 25 million HIVE shares—with a cost base of 2 cents—still locked up, and not due for release until May 15th.

That’s what happens when you flood the market with cheap paper; you put a cap on the stock. Punters looking to make a quick buck off trading the stock have been disappointed.

But HIVE sucked up $150 million of investor financing last fall and now their competitors are fighting over the scraps. It was a very smart long-term strategy and it looks like will pay off big in a few quarters.

But again, I don’t expect any fireworks soon in the share price.

There is significant bias in the investment community against cryptocurrency. To many in the investing industry, Bitcoin and Ethereum is just “funny money” and the forecast of $150 million annual revenue will be discounted heavily.

But this quarterly showed that investors can look at it like a real business—with cash flow and assets.  The next step for fundamental investors will likely be to see how HIVE sells some its cryptocurrency to fund development…or chooses to start some kind of basic operating debt facility.

This quarter was a good step in the right direction. For my personal position, I already own lots of HIVE stock. I just have to be patient.