Was NOT starting a paid investment research service in January as originally planned.

The second best-move I will make this year is starting the service in May when the bottom hits (or least you will see it from there).

When I started this blog last summer, I had every intent to launch a subscription service in early 2018.

There were a half-dozen Bitcoin miners looking to going public and the numbers for every one of them looked promising if not downright fantastic.

January 2018 looked like the perfect time to start the paid service. But it wasn’t. It would have been the WORST time.

Everyone was ecstatic the profit they had made in 2017. I could have gotten a lot of subscriptions… in the beginning.  But let’s be honest, NOTHING has gone up over the last 3 months. I would have done nothing but lose money for my subscribers.

I have been part of group that has been selling investment research since 2009. You have to play the long game.

Launching an investment research service at the top of the market does nothing but to strangle the baby in the crib.

We have finished the first quarter of 2018 and this chart says it all: 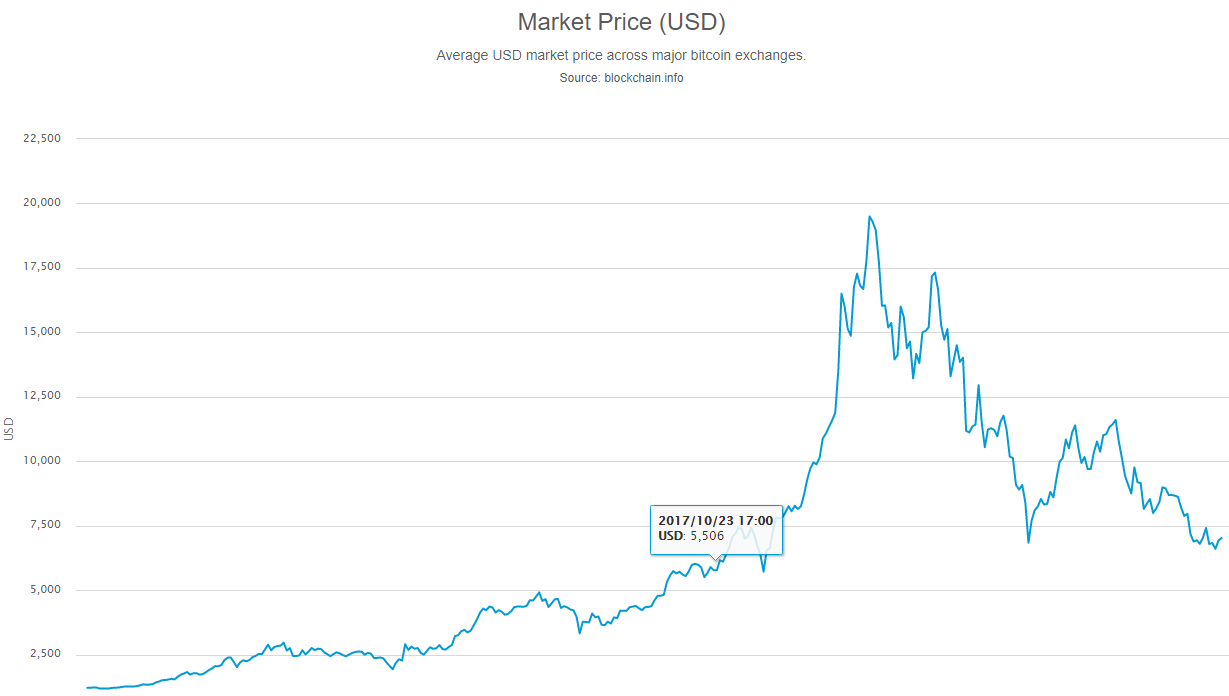 Fundstrat’s Tom Lee says the current slump is caused in large part by US investors need to sell some of their holdings to pay capital gains tax.

Mr. Lee estimates the U.S. investors bitcoin owe about $25 billion in capital gains tax for 2017 because of the crypto-boom.

That’s a stunning number because the average transaction volume of Bitcoin is between $500 million to $1.5 billion USD a day worldwide..  Bitcoin trading volume in US dollars is anywhere from $150-$300 million a day (most Bitcoin trades in Japanese yen).

An extra $100 million in selling per day can definitely depress the market.

As for myself, I am sitting on a lot of a cash anxiously waiting for a phone call from my accountant to see how much I owe to Revenue Canada. It wasn’t just U.S. investors who had a very good 2017.

There are at least two other factors that are depressing the price of Bitcoin.

As I wrote previously, Bitcoin miners in China are being forced to liquidate their holdings by the Chinese government.

Finally, the trustee for Mt. Gox (the largest bankruptcy in Bitcoin history) has been selling hundreds of millions of dollar’s worth of Bitcoin into the market, and still may have more than $1 billion of bitcoin that needs to be liquidated.

If you put those three factors together, it’s no wonder that Bitcoin crashed. Perhaps it should be a surprise that it has stayed above $5000.

Every cryptocurrency stock listed on the TSX Venture Exchange has been completely crushed since the beginning of 2018, with most dropping more than 75%.

I have been meeting with top executives of these companies for the last two weeks and all of them are very optimistic about the future.

More importantly, all them still have money in the bank from their financings.

Reviewing the transcripts from interviews, I am convinced most of these stocks are vastly oversold.

Best of all, there are darn few analysts reading the financials of these companies nowadays and even fewer analysts who dare to issue “buy” recommendations to their clients for crypto.

But am I rushing out to buy (more) stock? No, absolutely not. Most of them are still dropping in price anywhere from three to eight percent a day.

But that won’t go on much longer.

I would not be surprised to see a few of these companies issue sparkling reports with rock-solid numbers, in the month of April, and watch the stock tank the next day.

But as I have said many times, I am in this for the long haul. Eventually the IRS will get its money. One day the Mt. Gox trustee will have sold all his bitcoin. Even the Chinese bitcoin miners will eventually stop dumping bitcoin as they migrate their server farms out of China.

Is investing in crypto-stock risky? Sure, but there is WAY less risk then there was six months ago.

I know of other cryptocurrency newsletters, but they are few and far between. And they focus on crypto-coins, not on crypto-stocks. I don’t know of any other investment research service that focuses solely on companies in the crypto-sector.

My newsletter will be unique. I think the timing is perfect because once we hit rock-bottom we are going to bounce straight up. And rock-bottom is not far-off.

I will be launching the paid service in May; look for your special invitation in four to six weeks.