Many times over the last year I’ve been asked what is the use of Bitcoin? And I have said it is because of gambling.

Gamblers love bitcoin. It’s taken over the online gambling industry. I even wrote an article on this $550-billion-a-year industry moving to bitcoin.

Ethereum is no different.I’m sure you have read many news articles about how the ethereum network is going to revolutionize the world of banking/finance/investing and whatever else.

That’s in the future. But at present, the gambling industry, to bypass government regulations, are exploiting the ethereum’s ability to make decentralized applications to create online casinos.

Right now, the hottest applications on ethereum are pyramid and Ponzi games.

As always, a screen snap shot is worth a thousand words:

This is a list of the hottest applications running on the ethereum network, as listed by number of active users, from the website  State of the DAPPs.
The text is very small, so here is a close up of the rankings along with highlighted keywords: 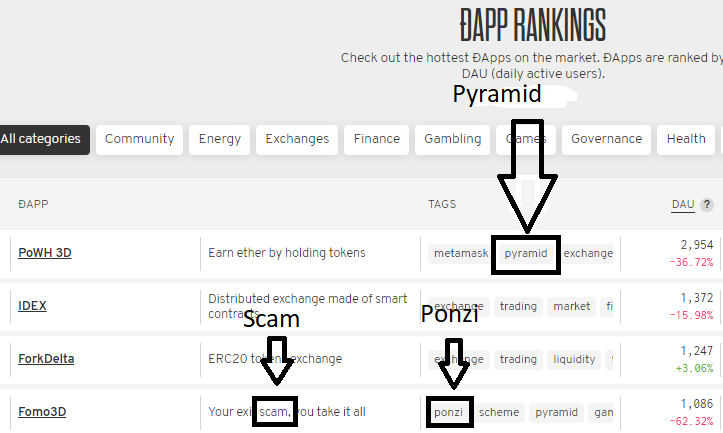 The number #1 Ethereum application in the world, PoWH 3D, is basically a pyramid scheme. Here is a description of the application:

“POWH3D is a unique cryptocurrency exchange which allows you to trade Ethereum for P3D tokens. P3D tokens are tokens with a clever twist: Every P3D holder receives direct earnings in Ethereumevery time that anyone else buys, sells or transfers the token based on the amounts of tokens (in % out of total amount minted) held.

This means that as soon as you hold P3D tokens, you are continuously accumulating “free” Ethereum distributed to you on every transaction based on the amount of P3D tokens you hold on the exchange!”

I will summarize the above paragraph. You buy P3D tokens with ethereum. The P3D tokens will give you dividends in ethereum, as long as there are suckers investors who will buy or trade P3D tokens after you.

You paid ethereum to buy in to the scheme. As more players come in to the game, you get paid out in etheruem. But only as new players enter the game.

As the creators of the P3D token admit:

“The lifeblood of P3D is volume and volatility. If the transaction volume slows down or stops (i.e no one is buying, selling, or trading) then this project will generate fewer and fewer earnings. Depending on when you got in, had you not broken even by that point the earnings stop flowing, you would be at a loss”

By the way, it’s independently verified that more than 58,000 Ether has been invested in this smart contract, with a value of more than $27 million USD.

The number of monthly active users? More than 10,000, for the month of July.But if you think PoWH 3D is “shady”, you haven’t seen anything yet: Welcome to FOMO3D: 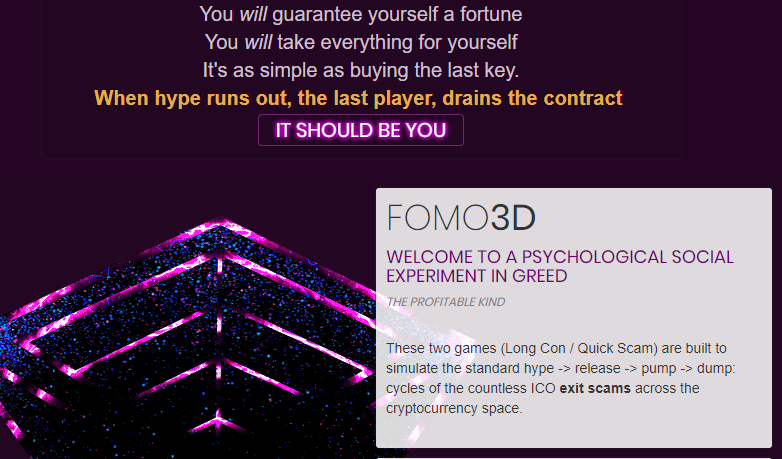 FOMO3D currently has 21,000 ether in the pot for a value of more than $10 million USD, and anybody playing the game has a chance to win it all.

But this pyramid scheme has an ingenious twist.

The last “player” of FOMO3D wins the pot.

If you visit this page, you will see a counter ticking down to zero. If the counter hits zero, and you are the last person to buy into the pot, you win the whole pot.

Of course, there are mini-payouts along the way, so that players don’t get bored. You can even choose different methods of payouts, each involving increasing levels of risk.

All of these games rely on new players entering to pay off the existing player base. This is the classic definition of a pyramid scheme. No pyramid scheme can go on forever.

But that raises a VERY interesting question with FOMO3D. Who will be the last player to buy-in and win the jackpot?

Immutable means the terms of the contract can’t be changed. The developers of the games cannot run away with the ethereum that is in the pot.

It is possible that the developers have built a back-door exploit into the contract to grab the ethereum at a pre-determined time in the future, but the code of PoWH 3D and FOMO3D is open-source meaning it is open to auditing by the public. Possible but not likely.

As long as the ethereum network exists, these games will keep on running, until no new players join the game.

Nobody likes to say it, but bitcoin has been widely adopted by online gamblers and that adoption has played a huge part in its current $140 billion market cap.

I estimate that less than $1 billion USD is currently being wagered via ethereum smart contracts (i.e. applications like PoWH 3D and FOMO3D). But it’s growing fast.

I think with the capacity of ethereum to create decentralized applications (i.e. programs that exist “in the cloud” and not on any one server), it’s going to be a gambler’s utopia.

You can’t shut down the casinos without shutting down the whole Ethereum network.

The fact that ethereum is decentralized is one of the great appeals of this industry. Governments can’t control it, companies can’t own it, and it can’t be manipulated “by the elites.”

It is an uplifting and noble idea where we all share responsibility for and create something for our common good.

But this is life, real life, where we push the boundaries of what is and eventually something good comes out of it.

Obviously not.  And crypto is now in that embryonic phase, and this is just one of the side shows we put up with as developers come round to using it for something more beneficial to all.