This chart should explain everything: 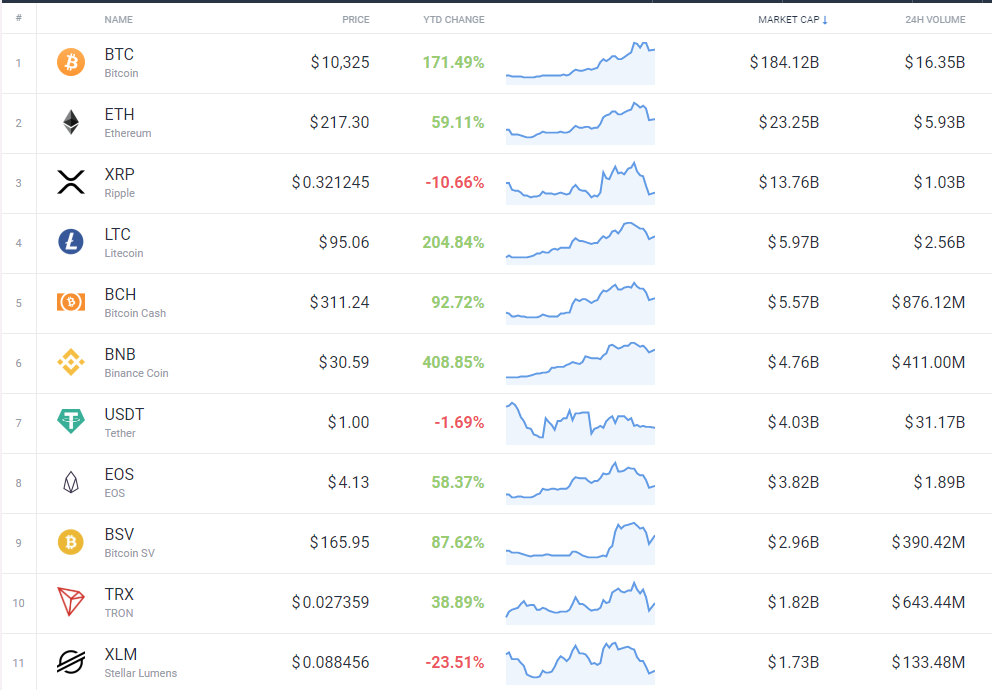 For all of 2019, I have been writing about bitcoin and ignoring the rest of the cryptocurrency universe.
The reason is simple: Excluding Litecoin and Binance coin (and I will discuss those coins in a minute), the returns on altcoins this year have been subpar.

If you are an owner of Ripple or Stellar Lumens, you have even lost money.

Did any of my readership run out and buy the coin? I doubt it, since Binance won’t sell the coin to U.S. residents.

Not much sense in talking up a coin that 99% of my readership can’t buy.

Litecoin is another matter. It’s up more than 200% this year. That’s because Litcoin is one of earliest forks of bitcoin, and like bitcoin the mining rewards are halved after a predetermined number of blocks are mined.

The reward for mining Litecoin is expected to be halved on August 5th, 2019 (less than two weeks from now.)

At present, 14,400 Litecoins are mined each day. That’s going to drop to 7200 Litecoins.
I wrote about the effect of halving on the price of bitcoin in this article. The halving milestone for bitcoin is expected next May.

The price appreciation of Litecoin in 2019 is a good sign, to say the least for holders of bitcoin.

Am I Interest in Buying Any Altcoins Right Now?

Not at present, for several reasons.

The most important reason is that I’m in crypto to make money. Lots of altcoins have interesting “stories” but if I want to read a good story, I’m going to pick up my Amazon Kindle.

Hedging bitcoin is about as low risk as it gets with regards to investing in crypto. Why should I take on more risk investing in altcoins, for lower returns?

Another reason to avoid altcoins is that the creators or “founders” of the coin have too big a stash, and have the potential to manipulate the market.

Ripple is a classic example of this problem (founders own more than 20% of all minted Ripple), and so is TRON (35% of all TRON has been set aside for “developers” but it’s unclear what that means).

Finally, I don’t like altcoins because all these coins have development team with budgets to pay salaries, but you wouldn’t know it from the amount of development work that has been done in the last two years.

For example, what is different between the Ripple of 2017 and today’s Ripple? Not much.

The poster child for failed altcoins is MaidSafe coin. It was funded with 7.6 million dollars in 2014.
Functionality of the coin never got out of alpha, let alone beta. It was finally abandoned about one year ago.

That’s four years of a development team collecting paycheques and producing nothing of value
Stunningly, the coin still sells for 15 cents, giving it a market cap of $70 million USD.

It doesn’t make for interesting blog stories, but a return of 171.9% PLUS hedging returns of 15% (which brings me close to 200% YTD) has turned me into a boring bitcoin investor.

Unless an altcoin development team releases something wildly new and useful, this could be my last story on altcoins for quite a long time.

I’m an investor in crypto because I want to make above-average returns, not because I need to be entertained.

Editor’s Note: Did you miss my last few stories? That’s because I switched to a cheaper mail deliverty service in the last month. But it was cheaper for a reason (couldn’t deliver mail worth a darn). So I switched back. Check out the website for the stories you missed.