An academic study on loan sharking in Asia discovered the average annual interest rate charged to customers is 416% a year.

But this week, crypto has that beat with some contract briefly paying out 670% per annum: 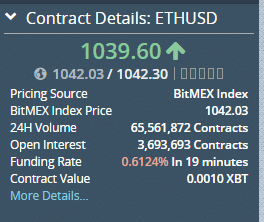 Let’s dig into these numbers:
The 0.06124% funding rate is the payout for the most liquid Ethereum futures contract on the planet, the Bitmex ETHUSD perpetual contract when you are shorting Ethereum.
The daily volume of  ETHUSD contracts on Bitmex is about $1.3 billion.
An impressive number especially since residents of the US are banned from trading on Bitmex.
The 0.6124% the funding rate for going long (or short) on the ETHUSD contract. The funding rate is literally the interest rate. If the funding rate is positive, then longs pay shorts. If negative, shorts pay long.
That funding/interest rate (.06124%) is not per annum. The funding rate is paid out every eight hours.
So what is the per annum payout if you are shorting the contract?
Take the funding rate and multiply by three to get 24 hours and then multiply it by 365 to get the per annum interest rate.
A quick calculation: 3 x .06124 x days in a year (365) means the annual interest rate charged to go long on Ethereum futures was: 670%.
Conversely, if you go SHORT on this contract, you get paid 670%

The 670% is a ridiculous number and shows a lot of “investors” shouldn’t be playing with derivatives.

Let’s take an example. You go short 100 Ethereum and the price of Ethereum doubles in six months.

The value of the contract is cut in half and is only worth 50 Ethereum. Except, in those six months, you were paid out more than 300%.

Therefore, you have double the amount of Ethereum. And of course the value of Ethereum has doubled, so therefore in dollar terms, you have made triple your money.

Therefore, even in a bull market, with those type of funding rates, it makes sense to short the market.

Now of course, this stupendous funding rate only lasted for one eight-hour session. However, the rates have stayed obscenely high all week:

(Note, in the boom time of late 2017, Bitmex, nor anyone else, offered perpetual futures contracts on Ethereum. Even for Bitmex, it was considered too risky at the time).

There is really nothing to compare to this bull run.

Looking back, the great spike in crypto happened because the crypto-exchanges melted down due to unprecedented volume, and the crypto market seized up (I wrote that up in my 2017 Christmas story You Want Bitcoin? You Can’t Have Any).

Today the crypto-exchanges are more robust and liquid by an order of magnitude.

This means EVERYBODY gets to profit (for now). New money coming gets to watch the price of bitcoin and Ethereum go up daily.

And long-term traders are happy to loan out their crypto to the gamblers who are shooting for the stars.

During a correction, the over-leveraged longs will get liquidated, as usual.

But traders who short this market are guaranteed to get paid no matter what happens.

Don’t Fall for the Myth of “Altcoin Season” 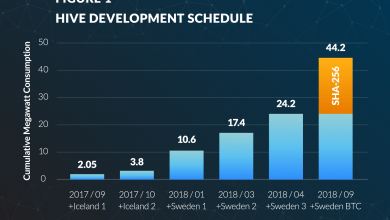 Now the Big Money is Flowing Into Cryptocurrency Mining 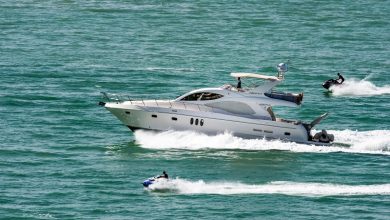 What the Rich People are Doing with Their Bitcoin

Will this Fairytale Romance Lead to the Next Crypto-Boom?

A Great Migration: The Ultimate Guide to Public Bitcoin Mining Companies in North America (Part One)