The Minexcoin team, based out of Russia, just announced their annual payout on the Minexcoin: 70%.

If you park your coins at the Minex “bank” you get weekly payouts to your wallet.

The Minexcoin is currently trading at $22 USD and is listed on two different crypto-exchanges: Livecoin and Coinexchange if you feel like taking the jump.

I ‘m not buying anything until the market stops crashing. But I have bought Minexcon in the past and may do so again.

But that is not the only coin that promises an eye-popping annual return.

If you buy 1000 Solaris coins, you can purchase a masternode that currently pays more than 70% per annum.

(A masternode is a set number of coins mandated by the coin protocol, that allows your computer server to become part of the coin network. Your server or “masternode” then assists with the housekeeping duties of the networks and is eligible for payouts) 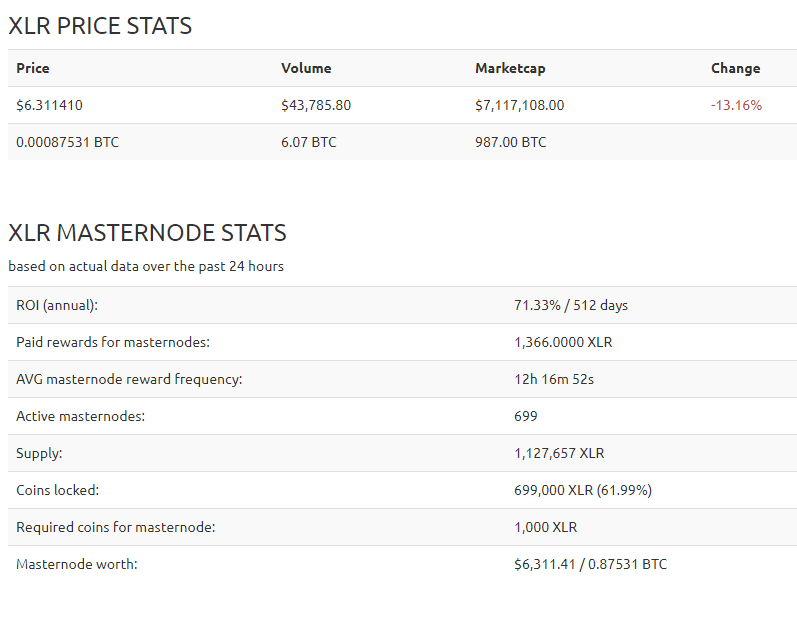 Solaris is available for purchase on the Kucoin exchange and instructions to set up a masternode for Solaris are here.

But before I go any further, I should explain: how are these tokens different from more familiar digital coins like Bitcoin and Ethereum?

Minex and Solaris are part of a new breed of exotic coins that use proof-of-stake algorithms to facilitate transactions and take over the work normally performed by miners (computer servers).

But before trying to even understand the mechanics of proof-of-stake, you need to understand proof-of work and how digital coins are minted (mined) and how transactions are facilitated.

“Mining” is the process of spending computing power to process transactions, secure the network, and keeps everyone in the system synchronized together.

Proof-of-work is fancy way of saying that miner(s) need to solve a mathematical puzzle before they are allowed to process a transaction (and get some digital cash as a reward).

Proof-of-work incentives miners (computer servers) to join the network, thereby making the network more secure and allow transactions to be processed on time.

If there is not enough computing power on the network, transactions can get backlogged (like what happened to Bitcoin in December 2018).

If you want a more detailed explanation of what mining actually involves you can read my article on it here.

Proof-of-Stake does away with the miners and instead hands out rewards to users who have a “stake” in the network. Here is how it works (roughly):

I have written about proof-of-stoke coins before, in this article. However, that article focussed on tokens with large market caps like NEM and NEO and Ethereum (which is currently proof-of-work but is migrating to proof-of-stake). None of those tokens at present offer payouts to stakeholders.

But when you look at coins with market caps under US$100 million, the numbers are stunning: 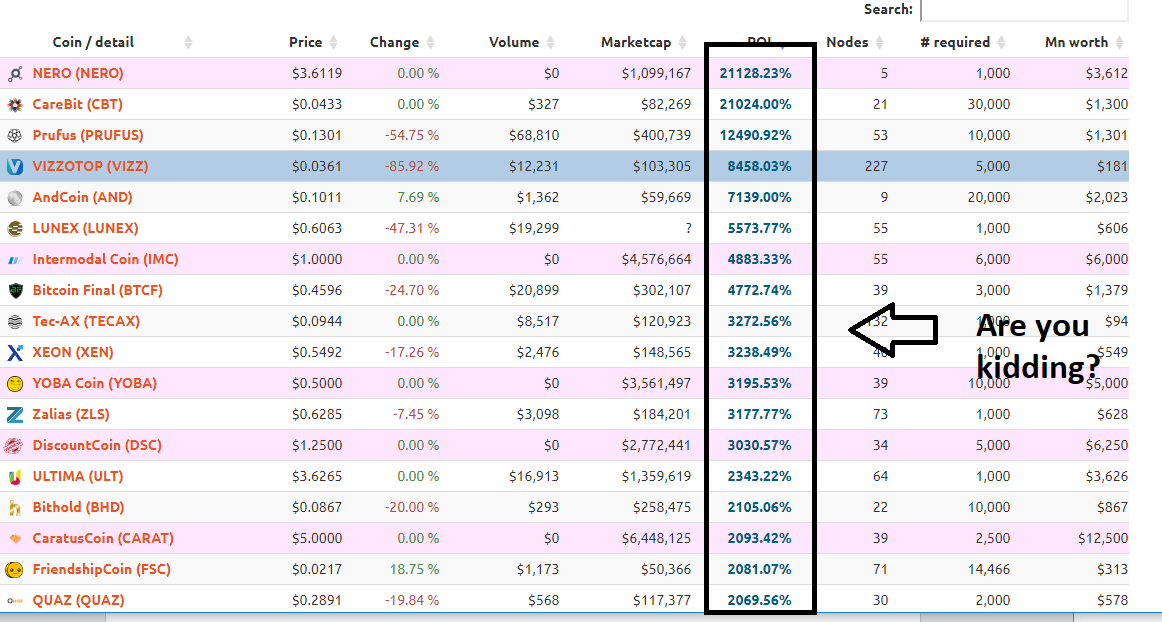 By the way the numbers in masternode.online should be take with several grains of salt. If you are serious about setting up a masternode and making large purchases of coins, do your own diligence and try to determine via forum chatter if the payouts are real.

Are these coins good investments? Well, I would assume that coins promising 1000% should be considered as nothing more than…lottery tickets. Some people would call them Ponzi schemes.

But are ALL them destined for failure?

What about Zcoin? The total value of coins in circulation are worth $128 million. Volume in trading last Thursday was almost $1 million.  It pays out 27.65 % per annum.

How does an network manage such payouts? Two ways: One is by charging transactions fees that get paid out to the miners. The second is with a more familiar way, the network automatically mints new coins for distribution to the masternodes.

Are these payouts sustainable? No. Dash had extremely high payouts in it’s first year of existence but has now tailed off to 7% per annum return. But of course, if you had bought Dash a year ago, you made have made 100x your money.

Remember, DASH, NEO, and NEM, before achieving markets caps of more than $1 billion, had market caps of less than $100 million and even $10 million.

Could one of these coins be the next NEO or even DASH? That is what these early buyers are betting on.

We are not at the bottom of the market yet (in my opinion) but we can see it from here. Ethereum is close to pre-mania levels, Bitcoin could see $5000 in April or even less.

I am not interested in buying any of these coins for now. At present these coins are dropping in value anywhere from 5% to 15% in value each day.

But if mania returns to the market, then investing in these proof-of-stake coins with tiny market caps could prove to be quite interesting.

And if one of them turns out to be the next DASH, it could be just like buying a winning lottery ticket.

Definitely the line between “tech investor” and “gambler” starts to blur the further you go down the cryptocurrency food chain.